With the start of the 2018 Atlantic Hurricane Season officially here, you may be thinking back to last year's destructive storms. Some were so bad that the names were retired. Tropical storms and hurricanes can have their names permanently retired from future lists when they are incredibly deadly or damaging. In 2017, Harvey, Irma, Maria, and Nate all were removed and will never be used again to name a tropical system. If we go back to the 1950s, which letter of the alphabet has the most retired names?

Let's start with a little bit of history on why tropical systems are named in the first place. In the 1950s, hurricanes began to be publicly named after confusion occurred when three were active at one time. Initially, the military's phonetic alphabet was used, but in 1953 this changed to a list of female names. It was 1979 before male names also were added to the list. The lists are created by the World Meteorological Organization's Hurricane Committee and repeat every six years. The committee meets before every hurricane season and decides which names will be retired and what names will replace them. 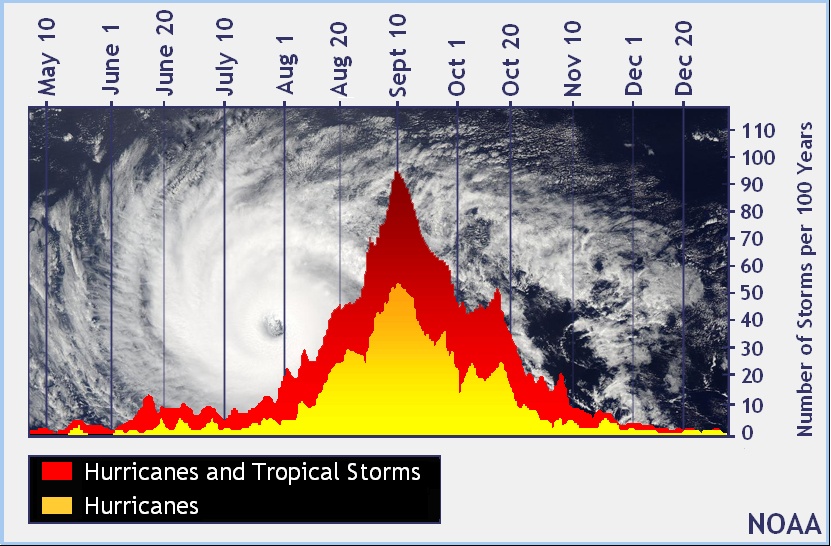 Hurricane season in the Atlantic begins on June 1 and ends on November 30; however, they can form before and after these dates. The above graph shows the peak of our season happens on September 10, and also indicates the time-frame when you probably don't want to plan a cruise to any tropical islands. While this image shows us when hurricanes and tropical storms occur the most, it says nothing about their destructive ability.

Looking back through history, we can count how many hurricane names were retired since 1950 and which letter of the alphabet with which they were associated. What letter would you guess is the winner?


Interestingly enough, the letter I won with 11 retired names. However, A, C, and F all tied for second place. And the letters D, E, G, H, J, and M all came in third with five names removed from the lists. Is there a reason the 9th letter of the alphabet was the winner?  Did those storms occur at the peak of the season? Let's take a look.


Well, I see a lot of September dates in that table. Now, let's graph it out and see how many occurred near the September 10th peak.

More than half of the retired names starting with the letter I overlap or begin on the climatological peak. By mid-September, the ocean temperatures have warmed up, and there is a lot of available energy for tropical systems. All of these were major hurricanes, except for Ingrid (which made the list due to $1.5 billion in property damage from flooding).

I'm not saying you should only be concerned with tropical cyclones starting with the letter I, after all, the majority of letters used in the yearly hurricane lists have had at least one name retired. All tropical storms and hurricanes can cause death and destruction. If you live in a hurricane-prone area, it is always best to be prepared ahead of time.