Have You Ever Seen a Thunderstorm Evolve from a Wildfire?

On Friday, May 11, 2018, a wildfire in the Texas Panhandle played a role in the development of a thunderstorm. This storm eventually evolved into a supercell thunderstorm that tracked into portions of western Oklahoma.

The Mallard Fire was burning just behind the dry line in Armstrong County, TX. In this image the fire is the red-circled dark spot in the shortwave IR satellite image, the smoke plume is in the yellow circle. 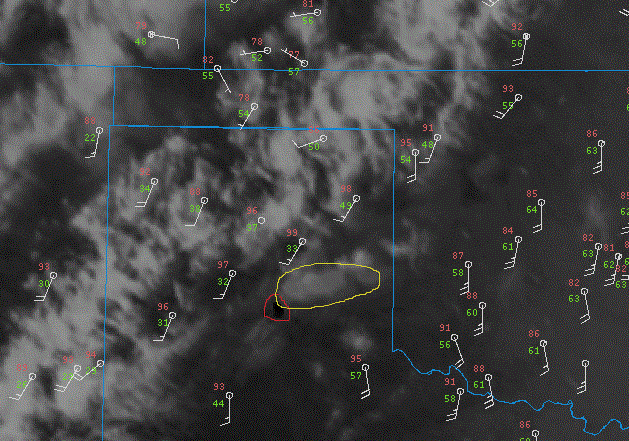 When a wildfire occurs, intense heating happens. This heating creates strong rising motion and instability, which leads to the development of a cloud known as a pyrocumulus, as seen in this visible satellite image. Conditions suitable for severe storms (instability and wind shear) existed just east of the dry line, all that was needed was an updraft, and a storm would form.

Eventually, the updraft initially associated with the fire and the pyrocumulus drew in enough moist air from east of the dry line to create an actual thunderstorm that ultimately produced quarter size hail and lots of lightning, seen as plus symbols in this image. 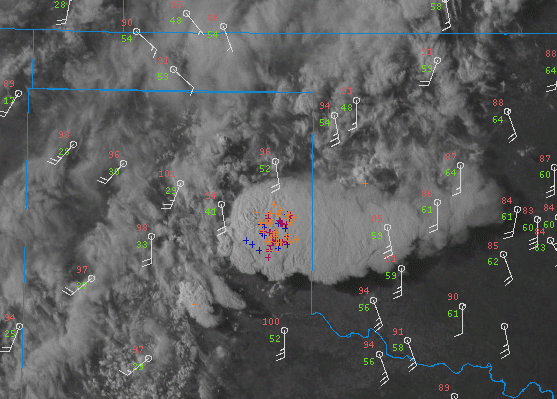 RadarScope shows the severe thunderstorm that eventually developed from the wildfire.

Wildfires typically develop in warm environments with low humidity and strong winds. Though not all fires produce thunderstorms like the Mallard Fire did, the thunderstorms themselves can be an indication of the intensity of the heat near the fire. Both radar and satellite can provide useful information to officials when monitoring the progress of wildfires.