Will Summer Extremes Continue Through Winter?

The summers of the recent past have been hot across the lower 48, and this summer was no exception. The heat arrived very early this year as May yielded the highest population-weighted cooling degree days on record dating back to 1981, making it the warmest May since that time. The anomalous heat continued in June, July, and August with some slight relief in the Central US this month. While there were undoubtedly shorter periods of extremes, the consistency of the anomalous warmth has been the story this summer. The June/July/August period will go down as the 4th warmest on record, only behind 2010, 2011 and 2016.

As meteorological summer winds down, what can we expect heading into fall and winter? Fall is looking very similar to summer with all three months expected to yield above normal temperatures nationally. The warmest of these months (compared to 1981-2010) is forecasted to be September. In our most recent Frontier update, we moved November slightly in the cooler direction from the previous forecast but still anticipate warmer than normal temperatures overall during the month.

Will the warmth from summer and fall extend into winter? At this point, we don’t think so. There could indeed be areas of above normal temperatures, but we do not expect widespread warmer than normal anomalies like this past summer or the winter of 2016-2017. Frontier's current forecast (which will update again on Wednesday) is for a slightly below normal look, in some vital demand areas, for the December through February period.

We are anticipating a winter that is slightly below the 30-year normal and much colder than last year. With a weak to moderate El Niño expected, a minimum in solar activity, and a more significant potential for a Greenland block to occur, we used ten analog years from the past with similarities to create the forecast. Due to some of these expectations, risks in the colder direction outweigh those in the warmer one, predominantly since one of our top weighted year is the winter of 2009/2010. The verification for the December-February period of this analog is below. 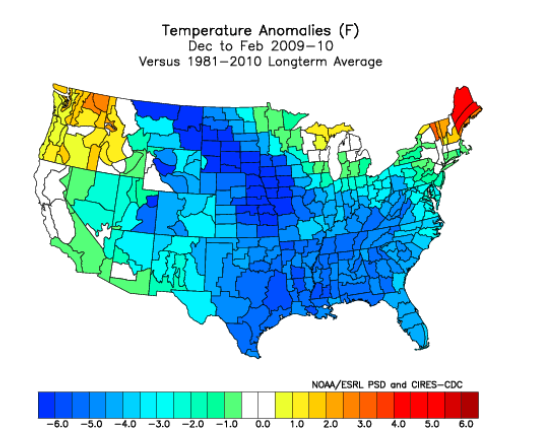 Not atypical from a weak El Niño pattern, our forecast is backloaded with the core of the anomalous cold coming in February. In the month-by-month breakdown below, December is forecast as the warmest compared to normal while February is the coldest.

No year is precisely the same, but our forecast considers current conditions, expected conditions and past years with similarities. For this winter, we feel that colder risks outweigh the warmer ones, particularly for the more densely populated areas in the lower 48. Overall, seasonal forecasts are very difficult, and confidence is typically low at this lead time. Because of the greater uncertainty, we update our long-term forecasts twice per month and the month-ahead forecast updates every day so that users can track the progression and trends to stay more consistently aware of changes and any significant pattern shifts.