What Happened to Spring?

It may be mid-April, but it sure doesn't feel like spring in many US locations. It's more like January 16th, as opposed to April 16th. It has been cold, windy, and snowy at a time when we usually see warm blue skies, leaves on trees, and flowers blooming.

This past weekend, there were tornadoes from Arkansas over to North Carolina.

Heavy rain caused flooding issues across the Southeast and is now affecting the East Coast.

It's raining so hard in New York the subways are flooding. A flash flood warning is in effect after 2.83 inches of rain has fallen since midnight.https://t.co/9Y0vmI6LuW pic.twitter.com/08cHi02R24

Wildfires continue to rage in the Texas Panhandle and western Oklahoma where dew points are low, and winds have gusted over 40 mph.

In the north, a blizzard brought multiple feet of snow. And this morning, snow was reported as far south as Tennessee.

So much snow has fallen this year that the Twin Cities have officially set a new record for the all-time snowiest start to a calendar year, with more snow in the forecast later this week.

Because we're full of fun facts here at @NWSTwinCities, as of this evening we're sitting at 70.3" of snow at Minneapolis/St. Paul since January 1. This sets a new record for the all-time snowiest start to a calendar year in the Twin Cities! #mnwx pic.twitter.com/gGpAoXDAk2

Poor Iowa had no idea what to expect on Friday the 13th because almost everything was in their forecast.

I hate to break it to those of you up north, but it's not going to get better over the next few days. Here is the WeatherOps Winter Weather Planner forecast for the coming week. All those blues, purples, and pinks equate to more snow and ice.

The forecast for the rest of the month doesn't look that much better either. Frontier Weather is showing a temperature anomaly of up to 8°F below normal. Unless you live in the Desert Southwest, April is pretty much shot. 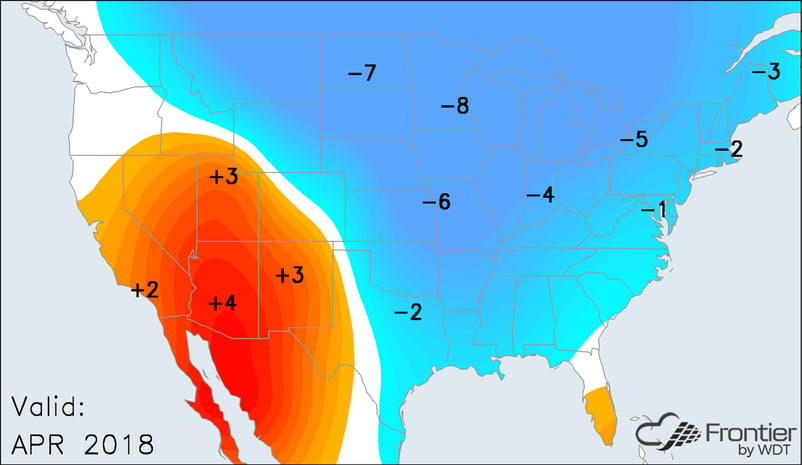 With so many different types of weather occurring, your business may run into problems. Staffing issues, delays and disruptions from severe weather events can all put a strain on your day-to-day operations. Our WeatherOps forecasts can help you be prepared ahead of time. Join our upcoming webinar to learn more.