Since its inception in 2000, WDT has run Numerical Weather Prediction (NWP) models operationally. In 2004, we began using the Weather Research and Forecasting Model (WRF) as its operational mesoscale model. WDT performs hundreds of WRF runs daily in support of applications including aviation, marine exploration and shipping, renewable energy, and winter weather forecasting.

An NWP model solves the system of equations governing the atmosphere’s physics by breaking the atmosphere down into points on a three-dimensional grid. An essential part of starting a model is initializing it with real data (observations). In WRF, we use observations in two ways: first, as initial conditions via an objective analysis technique; and second, to “nudge” the model toward the observations during the first part of the forecast.

We use several types of data to initialize WRF:

• Surface observations of temperature, dew point, and wind. These are the familiar “weather station” observations that are commonly taken at airports and on buoys and ships.
• Balloon-based observations that measure conditions throughout much of depth of the atmosphere. Called rawinsondes (“radar wind sonde”), they are launched twice daily at hundreds of locations worldwide.
• Wind and thermodynamic profilers. These measure conditions in the lowest few kilometers of the atmosphere.
• Observations made by sensors carried by many commercial aircraft.
• Satellite-derived observations of wind made by techniques such as cloud tracking. 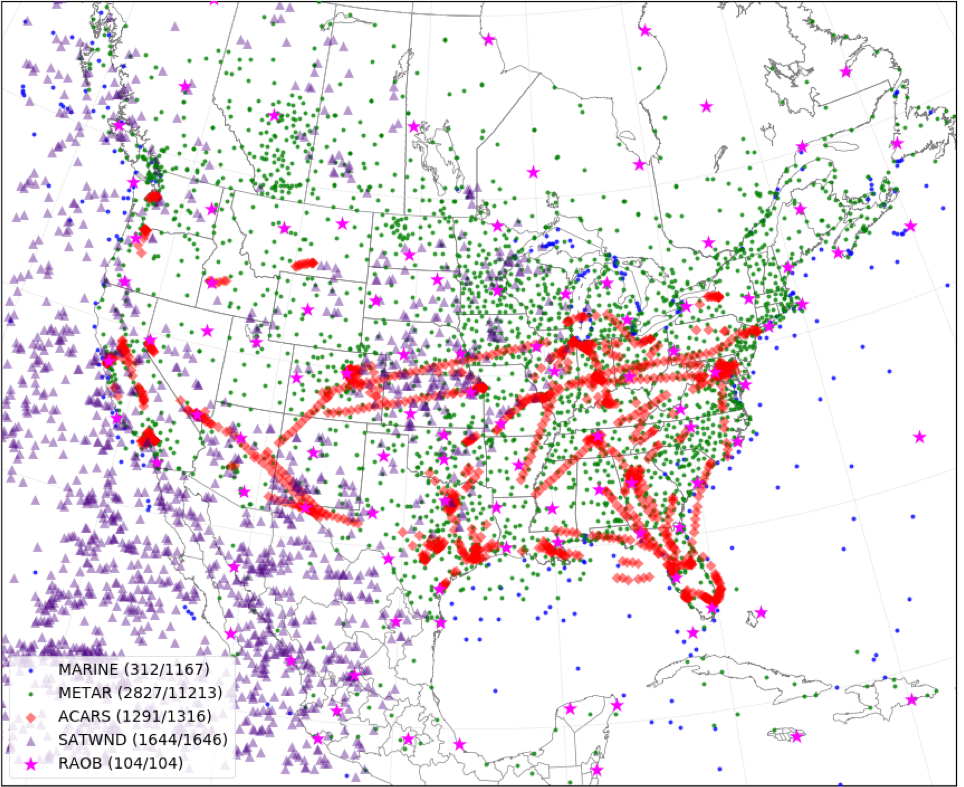 Weather observations used in a 3-hour period to initialize a WRF forecast at 1500 UTC on 16 May 2018. Types include surface observations
(METAR, MARINE; green and blue dots), rawinsonde (RAOB; stars), wind and thermodynamic profilers (PROFILER; not shown), aircraft
observations (ACARS; diamonds), and satellite-derived winds (SATWND; triangles). Numbers in parentheses are the number of unique
locations and number of observations for each type. Individual aircraft tracks are quite prominent, as are satellite-derived winds over
much of the western portion of the domain.