The Heat is on: Will drought be the silver bullet for Corn Prices in 2016?

The USDA report that broke yesterday brought with it bad news for growers; the 3rd largest crop ever planted and with it came a sharp decline in commodity prices. Growers are now hoping that a large scale drought will allow for prices to rally. However, growers are looking for the rally in all the wrong places.

I’ve seen a lot of tweets about the lack of rainfall in parts of Southern Iowa, eastern Nebraska and Kansas, and western South Dakota from growers. Everyone is hoping that drought impacts the crop, just not their fields so that prices may rise and they can take advantage of it. Many are hoping we have a summer like 2012.

This is what #corn looks like in Northern Story County in Iowa. No significant rainfall since May 22nd #drought pic.twitter.com/R3uz884In8

A lot of growers are hoping for a 2012 type year in regards to drought. Comparing the 2012 Drought Monitor issued at the same time as this week’s, growers can hope for a drought, but this is not the forecast.

We’re entering the part of the year where the corn belt receives large amounts of rainfall from squall lines like the one below.

This weekend in Eastern Kansas and Missouri, we're expecting a stalled front to produce widespread heavy rain which is also typical of this time of year. Some areas will potentially get over six inches of rain. 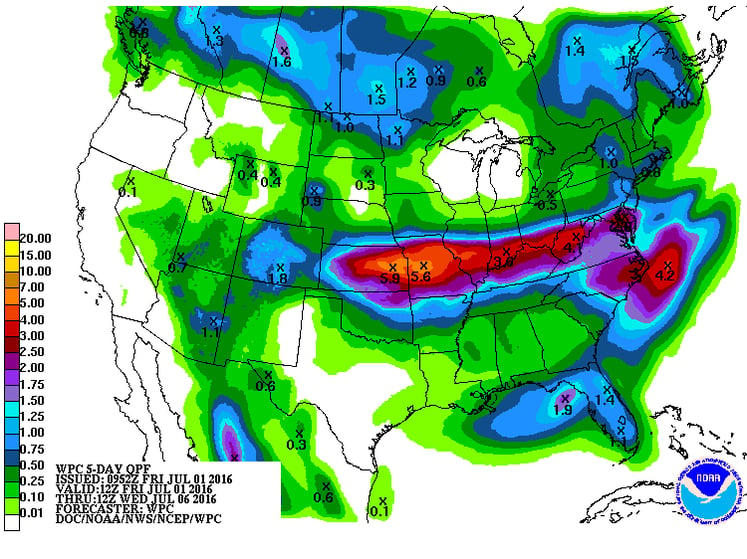 Will some areas have below average rainfall? Yes, but this year it truly will be feast or famine when it comes to rain. It all depends on where these systems track, but will there be a widespread drought? Very doubtful. So weather wise, where should growers be looking for a rally?

Rarely does drought not go hand in hand with heat. The combination of heat and lack of rain during pollination is what leads to the most damage to yield. What happens if we have only one of the two events? It's looking like that a near record-breaking hot summer is happening but not a widespread drought. Oklahoma City, where we’re headquartered, is already in the upper echelon of days above 90 degrees. 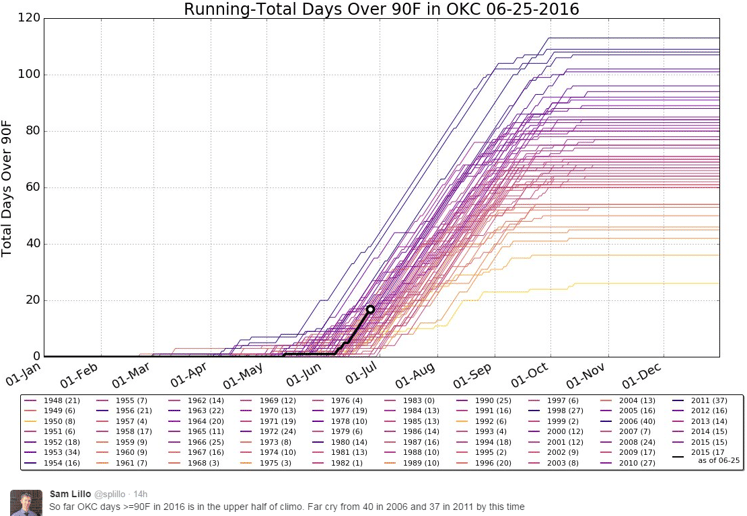 The longer range forecast, for July into August, is for warmer than normal temperatures across a widespread area.

It's rare, but agronomists may get a year where we can directly monitor the effect heat is going to have on the crop without drought over a large area.

All the more reason that this year, companies that serve agronomists and growers need to have access to high-resolution field level weather. Temperature, precipitation, and potential evapotranspiration are going to need to be monitored to identify areas that will have both heat and lack of rainfall, as well as which areas may just have high heat; especially during pollination. The weather is going to vary strongly this year, especially with precipitation, but understanding where these areas are, can lead to better management practices. For instance, growers who irrigate can mitigate heat stress during the R1 stage by applying a .2-.4" pass over their fields.  Growers who don’t have irrigation need to pay close attention to nitrogen and phosphorous levels, and implement a fertility management program, as this can also mitigate the effect heat will have on the crop.

What is field level weather?

Come by Booth 130 at InfoAg (August 2016) to hear from independent agronomists, including Michael Steeke, on how they’ve utilized WDT’s Skywise weather data on their fields in their decision making.