The Annual Minimum in Yearly Energy Demand Has Arrived

After a very cold month of April, the pattern has turned markedly warmer during May. While that has generated above-normal cooling demand as portions of the country reach the 90s and portions of the Southwest even reach the 100s, much of the Midwest and Northeast is finally seeing some pleasant weather. There is still usually some heating demand across the northern US in early May, but the warmer weather this month has limited that.

Historically, population-weighted Cooling Degree Days (CDDs) start to total more than gas weighted Heating Degree Days (HDDs) on a national basis around the third week of May, though that varies from year to year depending on the weather. This year that crossover is occurring earlier because of the warmer than normal conditions this month. The plot below shows a daily 10-year average of population-weighted CDDs, gas-weighted HDDs and a combination of the two. CDDs commonly exceed HDDs around May 20th, with HDDs reasserting dominance around October 1st. The total level of energy demand from both heating and air conditioning usage likewise reach a minimum for the year for a couple of weeks around those May 20th and October 1st dates. 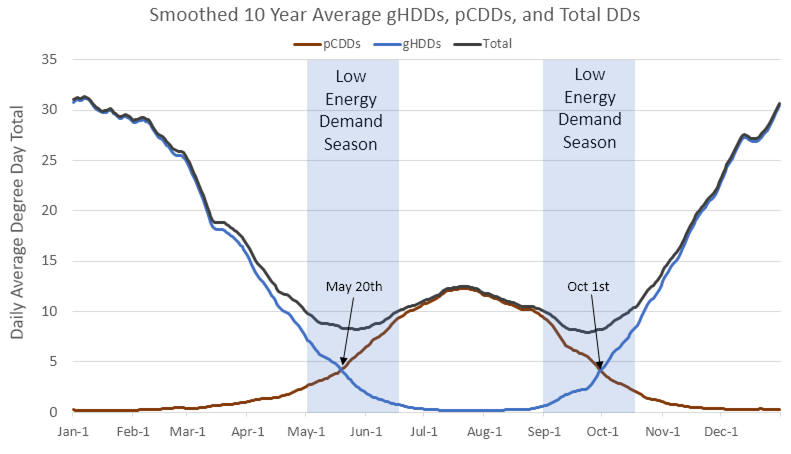 Even though conditions are currently warmer than normal across most of the country, overall levels of energy demand are still reaching their annual minimum. With little to no heating demand and cooling demand not yet at summer levels in most areas of the country, the demand for natural gas is reaching very low levels. May and early June typically see the lowest levels of natural gas (NG) demand, while mid-winter sees the highest levels of demand. Demand picks up again in mid-summer as natural gas consuming power plants boost power output to meet the demand for air conditioning. While there usually is more natural gas produced in the summer than is consumed by power generation and industrial activities, a period of exceptionally hot weather across the major population areas can sometimes result in demand overtaking production, resulting in some drawdown of natural gas in storage facilities. Typically though, the period from late April through early November sees more natural gas produced than consumed, allowing for the gas to be stockpiled for the winter season when weekly demand greatly outstrips weekly production levels. Below, you can see how the weekly difference between natural gas production and consumption (the bar graph) varies throughout the year, and how that relates to the weekly total degree days (the line). 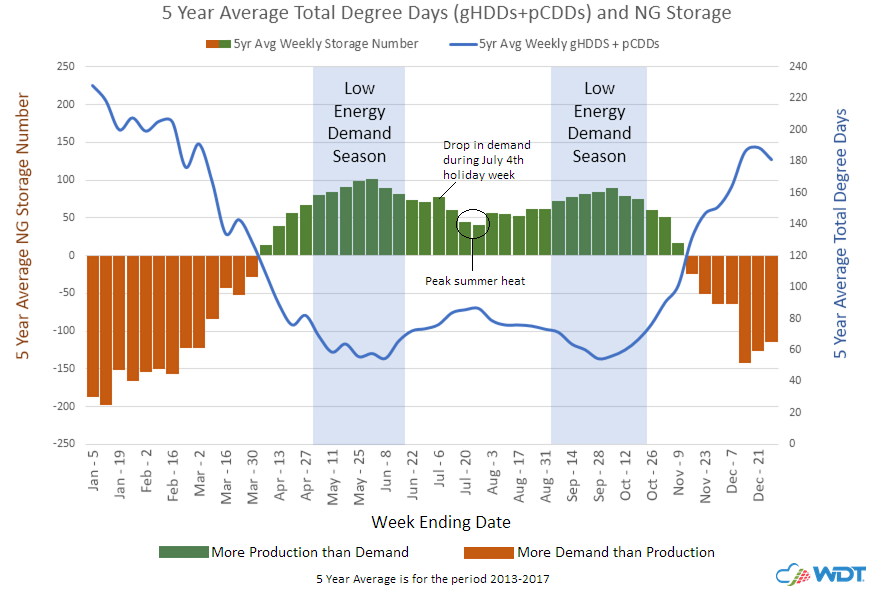 Even though there is a plentiful supply of natural gas during the summer season, weather variations in summer can still significantly impact natural gas prices. While a heat wave in July and the concurrent spike in gas demand related to electricity production doesn’t cause concern for immediate gas supply, it does reduce the amount of natural gas that will be put into storage for the following winter.

So, a persistent hot summer can leave less natural gas available for the upcoming winter, and if that winter is cold, then gas supplies can become constrained by late in the winter season. Since the natural gas supply is currently running below the five-year average, stretches of unusually cool or hot weather this summer will be important for natural gas prices during the coming year, not just this summer.