As a meteorologist in Oklahoma, I’m often asked by my ag clients if I chase storms. The answer to that question is a definite yes. Given the recent tornado outbreak on Monday in the High Plains, I thought it would be interesting to highlight how I chase, how I stay safe, and what we saw during this very rare event.

From a forecasting perspective, this day had many of the telltale signs of a significant tornado event.  Atmospheric instability, wind shear, and moisture were forecast to be in rare alignment.  I was fortunate to have chased this day with several of my best friends including Gabe Garfield, a renowned chaser and Norman meteorologist who works at the National Weather Center. At noon, many numerical weather models predicted very strong updrafts would form in the Texas Panhandle by the late afternoon.  This helped us to position ourselves for the fast-moving storms that would develop.  We waited for development in Shamrock, Texas, allowing ourselves the luxury of a Dairy Queen “blizzard” before chasing tornadoes. 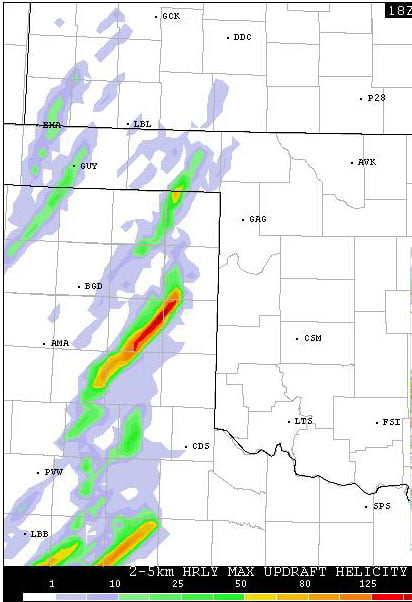 Around 4 pm, the long-expected storms developed off the dry line, just southwest of Amarillo.  We monitored the storm development with Weather Decision Technologies’ Radar Scope application.  RadarScope (for iOs and Android) is the go-to weather radar app that allows us to keep a safe distance from the storm.  (If you’re interested, Renny Vandewege , our head of Weather Analytics at WDT, has written an article on the usage statistics of this tornadic outbreak.) After using the application, we saw that the storms were moving our direction – just south of Groom, Texas at the time.  We decided to meet the storm near the town of Goodnight. Around 5:30 pm, the storm of interest (that had been forecasted in several high resolution numerical weather models) began to clear the Palo Duro Canyon area to our southwest. Not long after, we witnessed our first tornado of the day: a thin, but photogenic tornado. 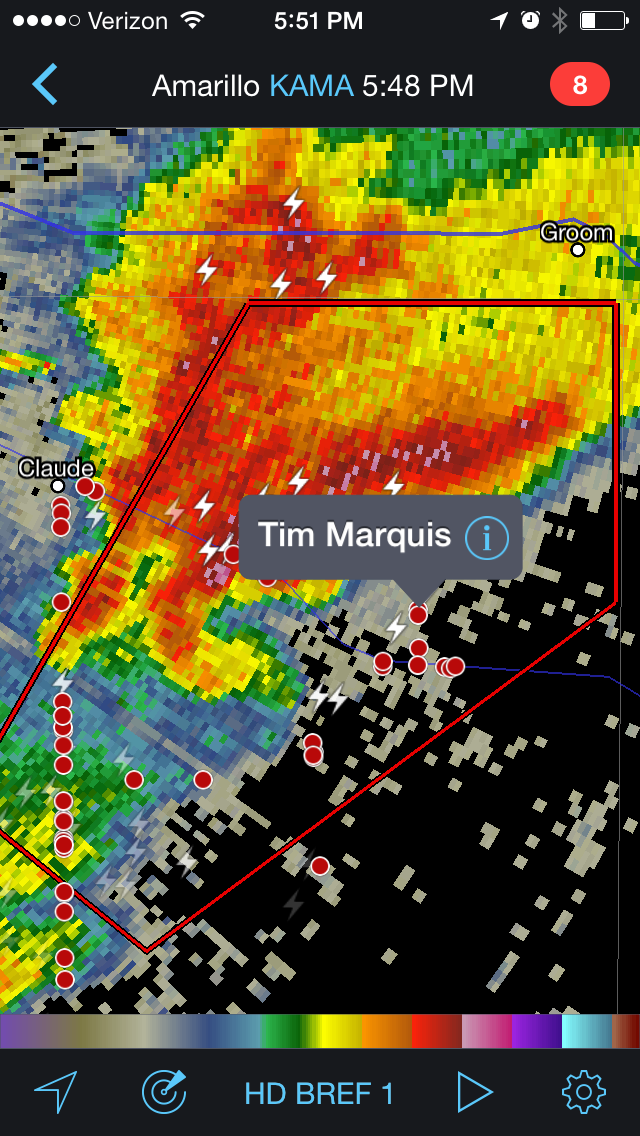 The rest of the chase was nothing short of incredible.  We witnessed multiple large tornadoes, well into the night.  The best way to follow along is to use the interactive map I created that includes the following:

On Monday night, we chased two storms.  These storms were only separated by 15 miles apart, and both produced tornadoes at the same time. This is extremely rare!  The storms moved southwest to northeast and produced tornadoes almost constantly from just south of Claude, Texas all the way to just east of Coldwater, Kansas!   Fortunately, no injuries or fatalities were reported with these tornadoes.  We followed the lead storm from Claude to Miami, Texas, and then picked up the second cell at Miami.  We followed the latter storm well into the night, ending our chase just across the border in Kansas.  Over the course of 187 miles and 4 hours, we documented as many as 11 tornadoes.   The entire time we maintained a 4-8 mile distance between us and the tornadoes, allowing us to stay safe as the tornadoes moved in excess of 40 mph to the northeast. The strongest and largest tornadoes occurred between 6 and 8 pm local time, when we observed at least 3 instances of a satellite tornado encircling a larger wedge-shaped tornado. Around 10 pm, we witnessed one – and very possibly, two - wedge tornadoes near Fort Supply, Oklahoma. Incredibly, these circulations were rotating around each other!  This phenomenon is known as the  Fujiwara effect, which only occurs within the strongest rotating thunderstorms.

With only an AWD Ford Edge, non-stop Verizon internet, GPS maps, and WDT’s RadarScope, we were able to document this rare tornado outbreak from a safe distance. Of course, the most important aspect of staying safe is having the necessary meteorological knowledge and chase experience to know how to stay safe while chasing fast-moving, large tornadoes in the dark!