Southern California is on Fire Again - And This One Means Business

When the Santa Ana winds combine with a drought and fire, Southern California ends up in major trouble. This is what is currently happening in Ventura County. The Thomas Fire is currently out of control.

On Monday night, a fire began burning north of Santa Paula. It is currently unknown what started it, but strong winds in the area could have caused power lines to ignite it. At publish-time, the fire has burned approximately 45,000 acres and is not contained. So far, almost 8,000 homes are under mandatory evacuation orders and at least 150 buildings have been destroyed.

The Santa Ana winds are strong winds that blow through the mountain passes in Southern California. These downslope winds can easily exceed 40 mph and bring very low relative humidity. They can cause critical to extreme fire weather conditions and are known to spread wildfires very quickly. In the images below, you can see the current winds and lowest area of relative humidity currently overlap. Bad news. 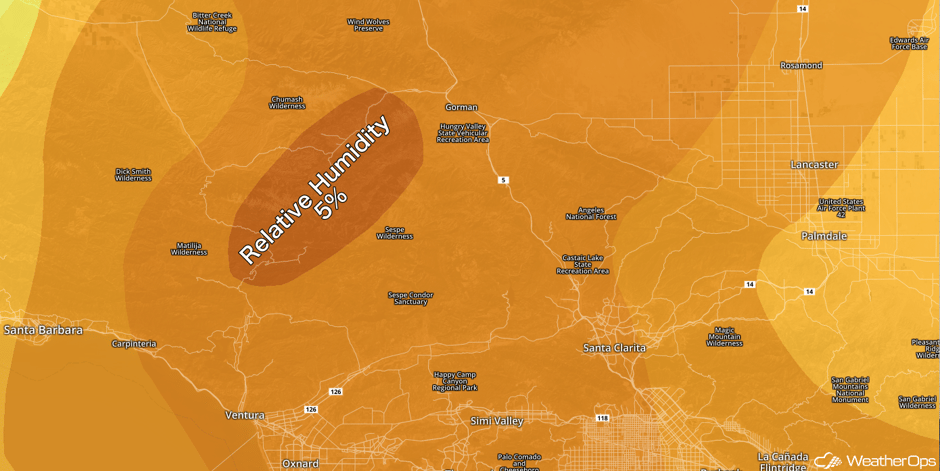 With very dry vegetation in the area and wind gusts of up to 70 mph, the fire is expected to continue to spread. Any additional fires will start and move quickly. The Thomas Fire is currently moving west. As of now, it has burned into the city limits of Ventura.

#ThomasFire Intense Wind continues in the hills above Ventura currently at 45,000 acres with 150 homes and structures lost pic.twitter.com/OFImtC46V4

Those in Southern California need to be on the watch for fast moving flames and evacuate when requested. Heavy smoke may also cause issues for those with breathing conditions. Multiple roads and schools are currently closed. Dry weather and strong winds are expected again on Wednesday.