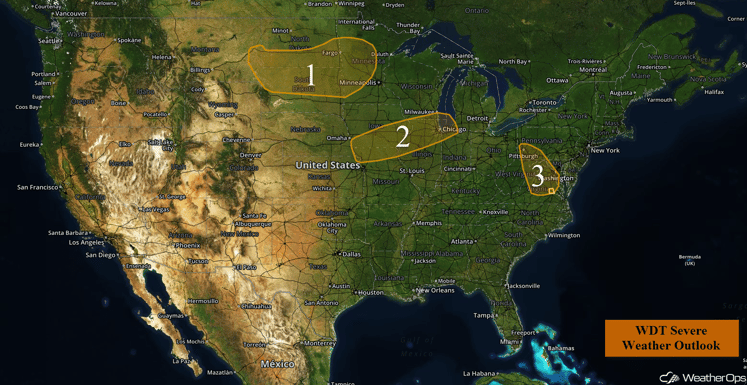 Although there will only be minimal instability across Region 1, a strong shortwave trough is forecast to move across the High Plains today bringing the threat for scattered showers and thunderstorms throughout the day. Currently, ongoing thunderstorms only pose a marginal threat during the morning. However, as the afternoon wears on, warm moist air will filter into the region. Combined with strong wind shear, there will be the potential for strong to severe thunderstorms. The primary threat with any thunderstorm that does develop will be strong winds, but an isolated tornado or two and hail cannot be ruled out. 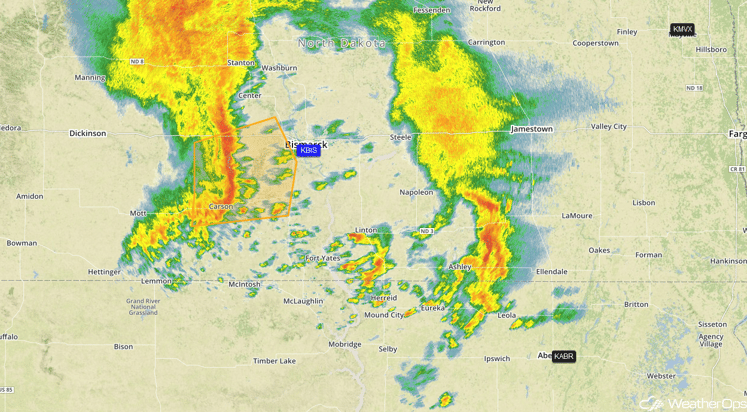 A stalled front extending westward across the Midwest and into the eastern Central Plains will be the main focus for the development of thunderstorms today. With plentiful moisture ahead of the front and building instability as a result of daytime heating, scattered thunderstorms will likely develop during the afternoon and early evening hours. With low to moderate shear across the region, the main threats with any thunderstorm that does develop will be damaging winds and isolated large hail. Storms are expected to continue to persist through the early evening, gradually weakening through midnight.

A weak area of low pressure will be the main focus for thunderstorms across portions of the Mid Atlantic today. With warm moist air in place, combined with weak to moderate instability due to daytime heating, thunderstorms are likely this afternoon. Damaging winds will be the primary hazard with any thunderstorm that does develop. Thunderstorms should gradually begin to diminish once the sun sets today. 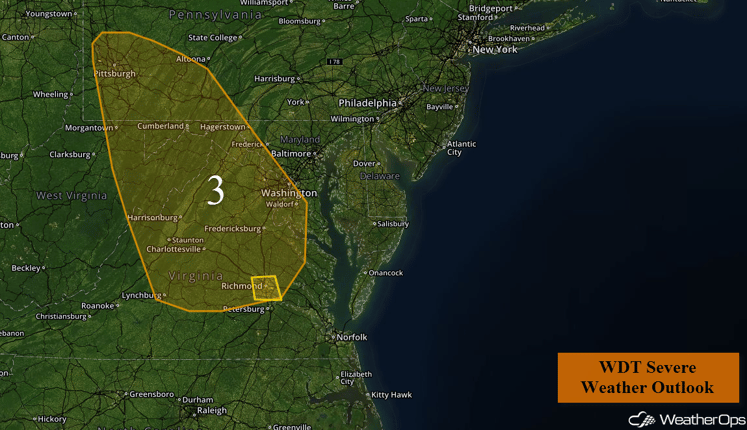 As Tropical Storm Newton continues to make landfall in Mexico, plentiful moisture will surge into the Desert Southwest, allowing for numerous showers and thunderstorms throughout the day. Rainfall amounts will average 1-3 inches with locally heavier amounts in southern portions of the region. 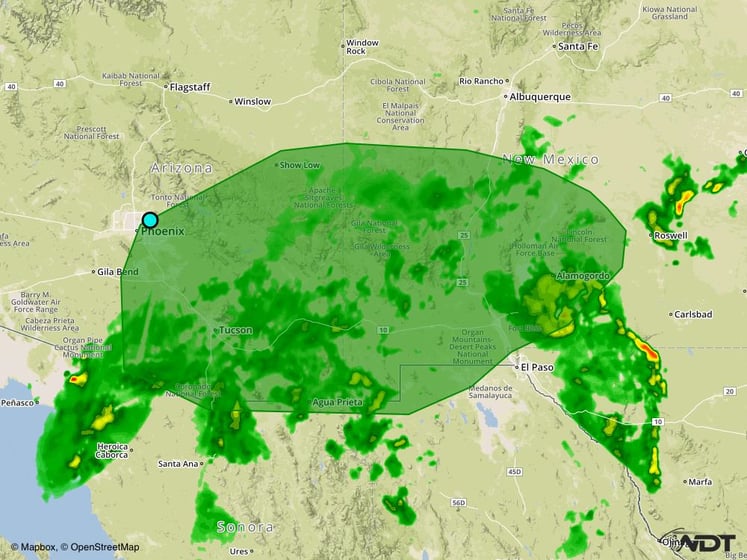 Strong to Severe Thunderstorms Possible Thursday for Nebraska and Iowa

A cold front will stall and eventually begin lifting northward as a warm front on Thursday, promoting thunderstorm development with a few severe thunderstorms possible. A few of these storms will have the potential to produce large hail and damaging winds through the evening and nighttime hours. 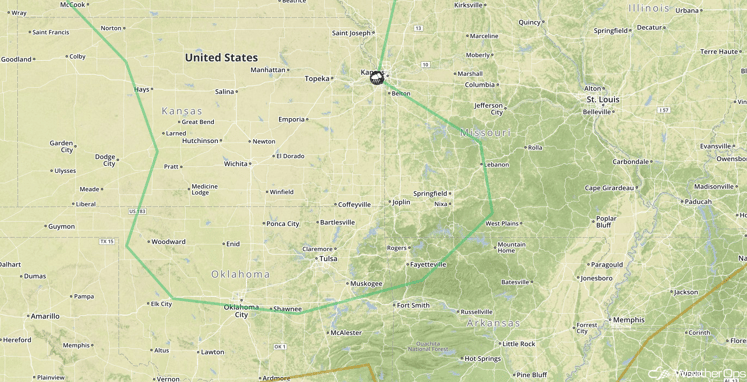 A cold front and area of low pressure will approach the region on Thursday, bringing the potential for thunderstorms, some of which may be severe. Ongoing cloud cover could limit overall development, but any daytime heating that can develop should allow for the development of thunderstorms capable of large hail and damaging winds during the afternoon and evening.

Excessive Rainfall Possible across the Missouri Valley on Thursday

Another round of thunderstorm activity is likely along a sagging frontal boundary across the Missouri Valley that should eventually lift back to the north as a warm front. Rainfall amounts of 1-2 inches will be possible, in addition to some flooding. 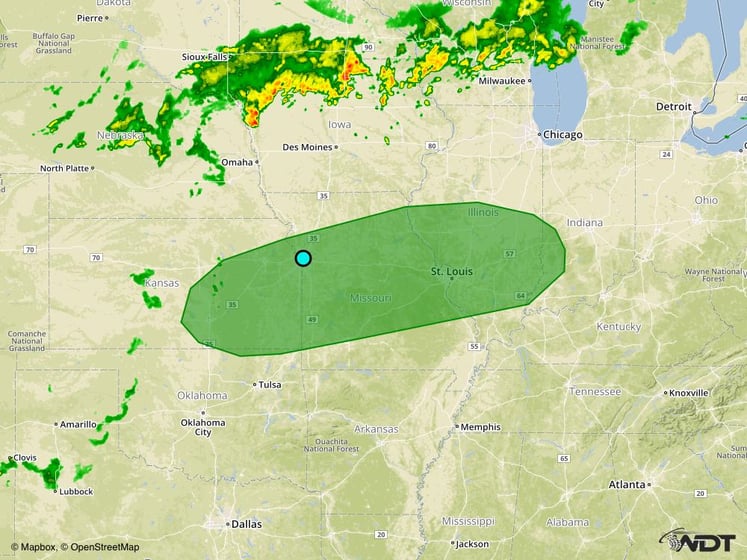 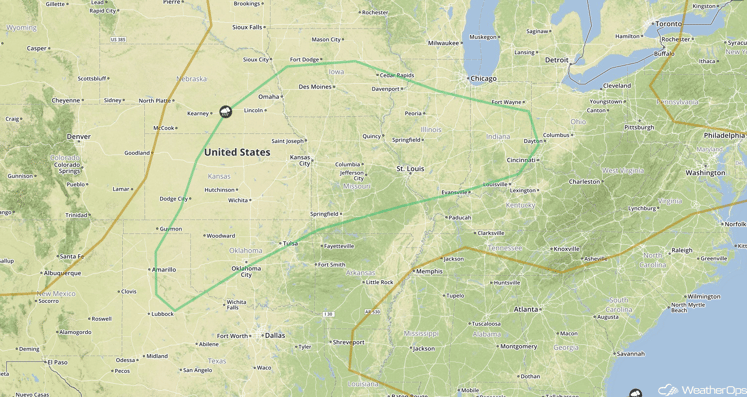 A tropical wave (green oval) is passing near the Cabo Verde Islands accompanied by disorganized showers and thunderstorms. No significant development is expected during the next couple of days, but conditions are expected to become a little more favorable for gradual development of this system, and a tropical depression could form by the weekend while it moves west-northwestward toward the central tropical Atlantic.

Tropical Storm Newton (red oval) continues to move north-northeastward and is expected to dissipate tonight. Tropical storm conditions could reach as far north as southern Arizona. Rainfall amounts of 3-6 inches with locally higher amounts in excess of 10 inches will be possible. 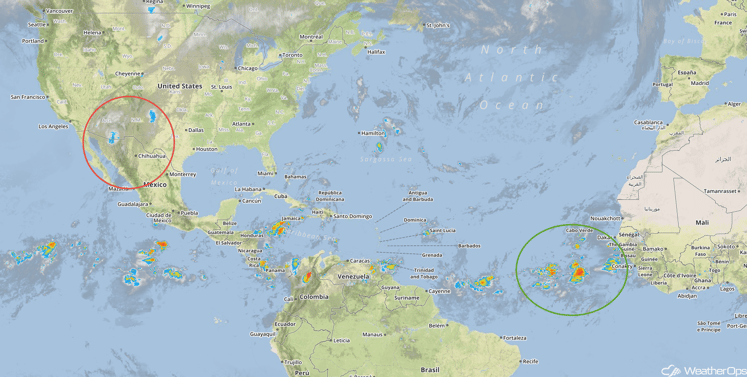 Thunderstorms will be possible across the Ohio Valley on Saturday as an area of low pressure and cold front approach the region. By early next week, a new system will bring a risk for thunderstorms to portions of the Northern and Central Plains.