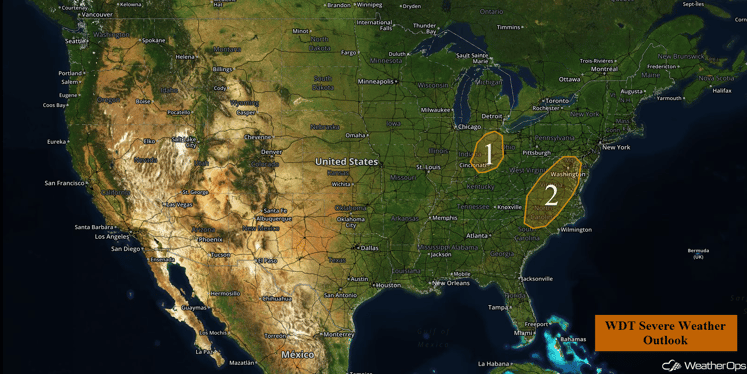 A cold front moving through the region will act as a focus for shower and thunderstorm development on Wednesday. Modest instability in place could allow for a few thunderstorms to become strong, with small hail expected to be the main hazard. Thunderstorms that remain below severe limits will still be capable of producing frequent lightning and heavy rainfall. The most likely time for severe weather will be during the afternoon hours, with the threat diminishing during the evening. 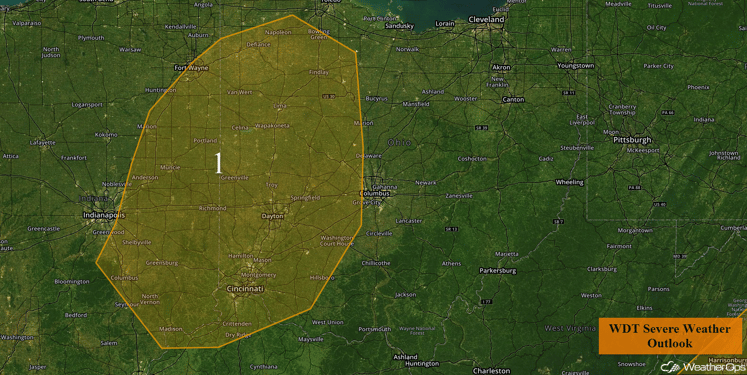 A warm front will move northward into the Mid-Atlantic today. Behind this warm front, very warm, moist, and unstable air will overspread the region. Given this large instability, combined with sufficient wind shear, thunderstorms that develop later today are likely to become supercellular. The main severe weather threat will be damaging wind gusts, with large hail also possible. A few tornadoes will be possible as well. The most probable time for severe weather will be during the mid-afternoon with the severe weather threat diminishing during the evening. In addition, heavy rain will be possible; rainfall amounts of 1-3 inches with isolated higher amounts in excess of 4 inches will be possible, leading to the potential for flash flooding.

Update 3:10pm EDT: Severe Thunderstorm Watch in effect for portions of Maryland, North Carolina, and Virginia until 10pm EDT. Hail to 1.5 inches in diameter, damaging winds to 70 mph, and isolated tornadoes will be possible.

An area of low pressure over the Ohio Valley will remain nearly stationary on Thursday. Leftover heavy rainfall from the previous evening's activity will remain across portions of the Northeast and Mid Atlantic. In addition to this low, a new area of low pressure will develop in the Southeast along a stalled front. Heavy to excessive rainfall will be possible; rainfall amounts of 2-4 inches with isolated higher amounts in excess of 5 inches will be possible across portions of the Northeast. Heavy rain will continue into Friday with an additional 1-3 inches with locally higher amounts in excess of 4 inches possible. Given the continued heavy rain, flooding will be a concern across the region. 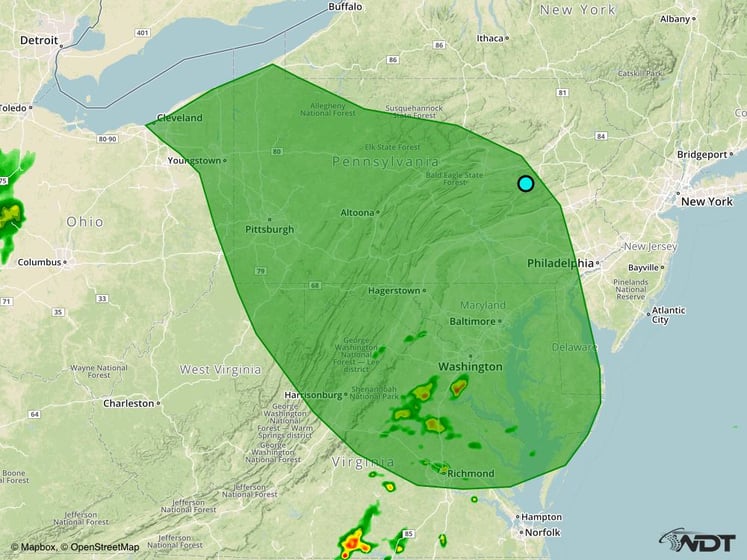 Tropical Storm Matthew (green oval) is moving toward the west at 21 mph; this general motion is expected over the next couple of days with a decrease in forward speed. On the current forecast track, the center of Matthew will move through the Windward Islands today and over the eastern Caribbean through Friday. Maximum sustained winds are near 60 mph with higher gusts. Gradual strengthening is forecast during the next couple of days and Matthew could become a hurricane by Friday.

An area of disorganized showers and thunderstorms (red oval) along the coast of the western Gulf of Mexico are associated with a weak area of low pressure near Tampico, Mexico. This low is forecast to move inland today or tonight with no significant development expected.