Thunderstorms are forecast from the Ohio Valley into New England on Wednesday ahead of a cold front. Some of this activity may pose a risk for excessive rainfall across the Northeast.  Excessive rainfall is expected from South Texas to the Tennessee Valley as a slow moving cold front moves southward.

Thunderstorms from the Ohio Valley into New England on Wednesday
A cold front is expected to progress eastward across the eastern US today. Thunderstorms are expected to develop along and ahead of the front. Some thunderstorm activity is ongoing, but by afternoon, increasing instability will allow for additional thunderstorm development, some of which could become severe, Damaging winds will be the primary hazard, but a few isolated tornadoes cannot be ruled out. 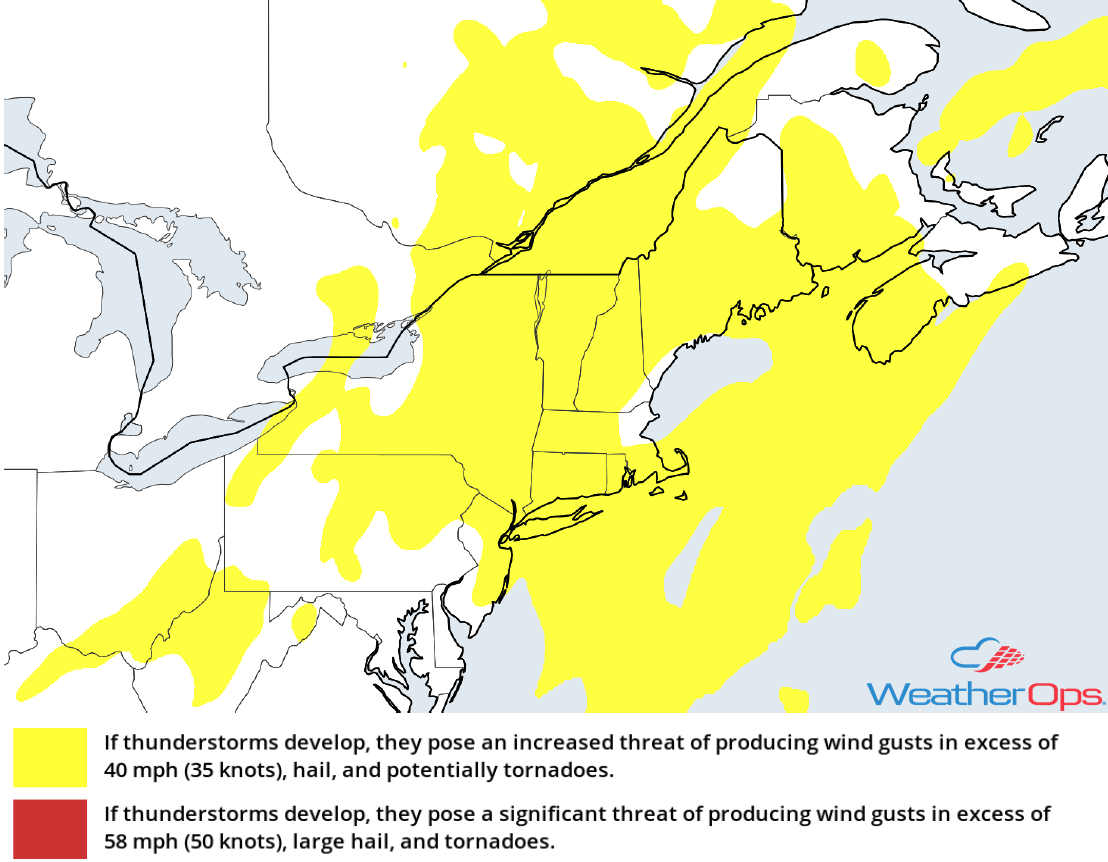 Risk for Excessive Rainfall Wednesday across the Northeast
In addition to the thunderstorm risk described above, there will be a potential for excessive rainfall. Rainfall amounts will range 1-2 inches with locally higher amounts in excess of 3 inches. 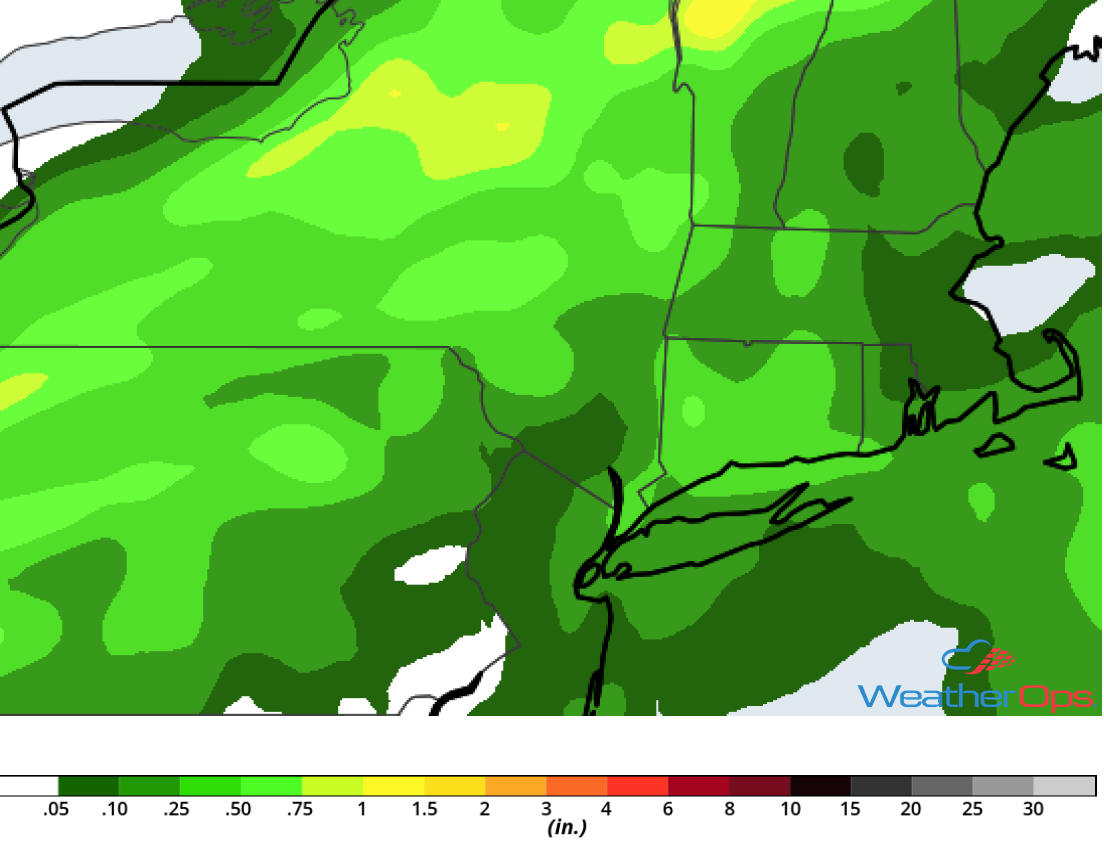 Excessive Rainfall from South Texas to the Tennessee Valley on Wednesday
A cold front moving slowly southeastward will allow for the development of showers and thunderstorms from South Texas northeastward into the Tennessee Valley today and tonight. As deep moisture continues to move northward from the Gulf of Mexico, there will be a risk for excessive rainfall across the region. Rainfall amounts of 1-2 inches and locally higher amounts in excess of 3 inches are expected. Areas that received heavy rain yesterday will be at an increased risk for flooding. 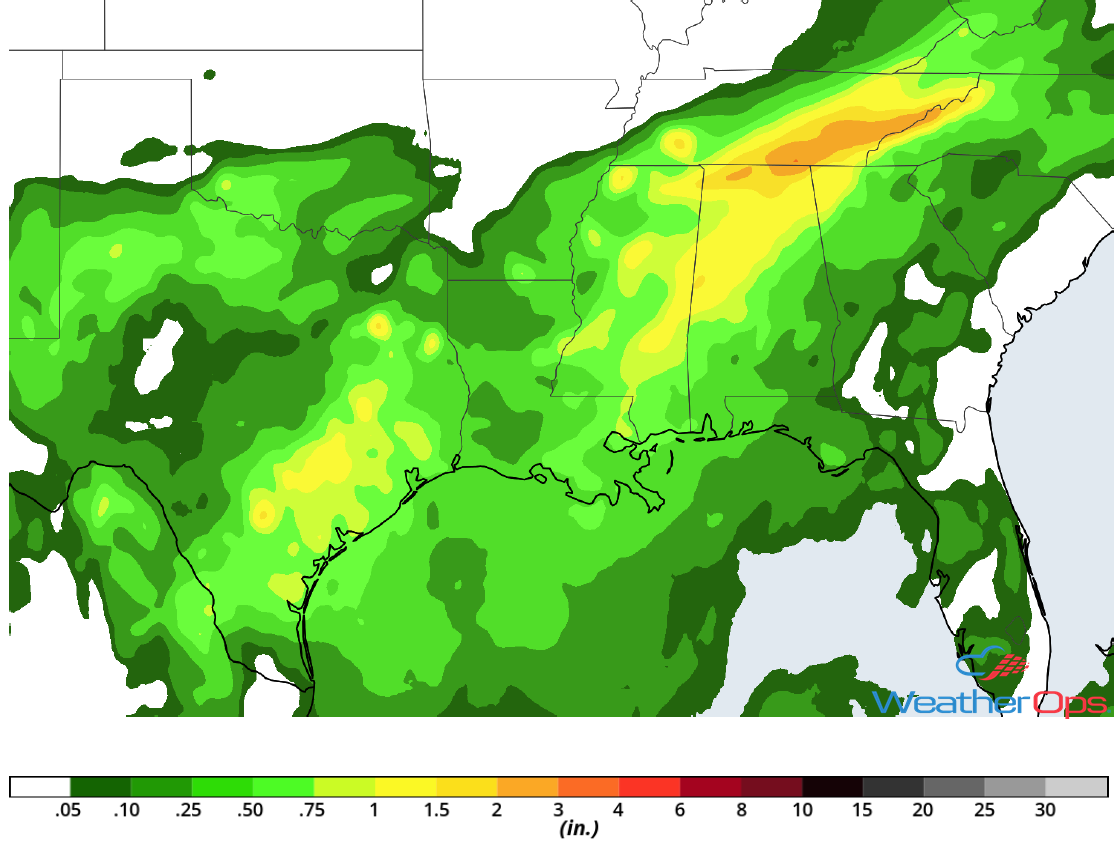 Thunderstorm Potential Thursday across the Southeast
A cold front slowly tracking southeastward across portions of the Southeast will be the focus for thunderstorm potential from northeast Georgia into the Carolinas on Thursday. A few thunderstorms may be strong to severe with gusty winds the primary hazard.

Risk for Excessive Rainfall for the Southern and Central Appalachians Thursday
An area of low pressure developing along the cold front described above will track northeastward from the Southeast into the central Appalachians on Thursday. Due to the slow moving nature of the front, several rounds of showers and thunderstorm are forecast, bringing a risk for excessive rainfall. Rainfall amounts of 1-2 inches with locally higher amounts in excess of 3 inches are expected. 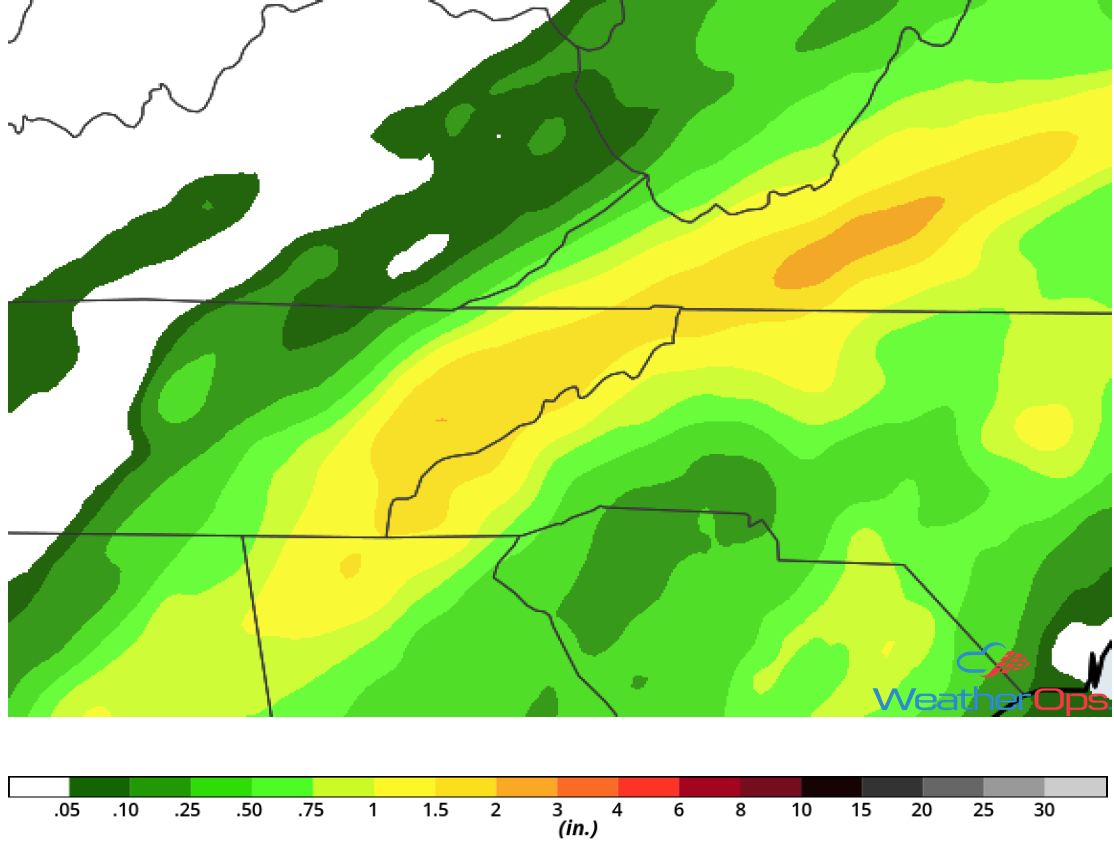 Tropical Update
Tropical Storm Kirk (green oval) is 360 miles east-southeast of Barbados and is moving westward at 18 mph. This motion is expected to continue over the next few days. On the current track, Kirk will move over the Lesser Antilles Thursday night. Maximum sustained winds are at 50 mph. Little change in strength is expected before moving over the Lesser Antilles but will weaken as it moves into the eastern Caribbean Sea.

An area of low pressure about 100 miles southeast of Cape Hatteras, North Carolina (red oval) is producing disorganized shower activity to the east of the center. Strong upper level winds are expected to inhibit further development. The low is forecast to move northeastward this morning and it could produce scattered showers across eastern North Carolina, in addition to dangerous surf and rip currents. It is expected to continue to move northeastward and merge with a frontal system or dissipate off the New England coast on Thursday.

Post-Tropical Cyclone Leslie is located several hundred miles west-southwest of the Azores (blue oval) and producing disorganized shower activity. Leslie is expected to reacquire subtropical or tropical characteristics on Thursday or Friday while it meanders over the north central Atlantic. 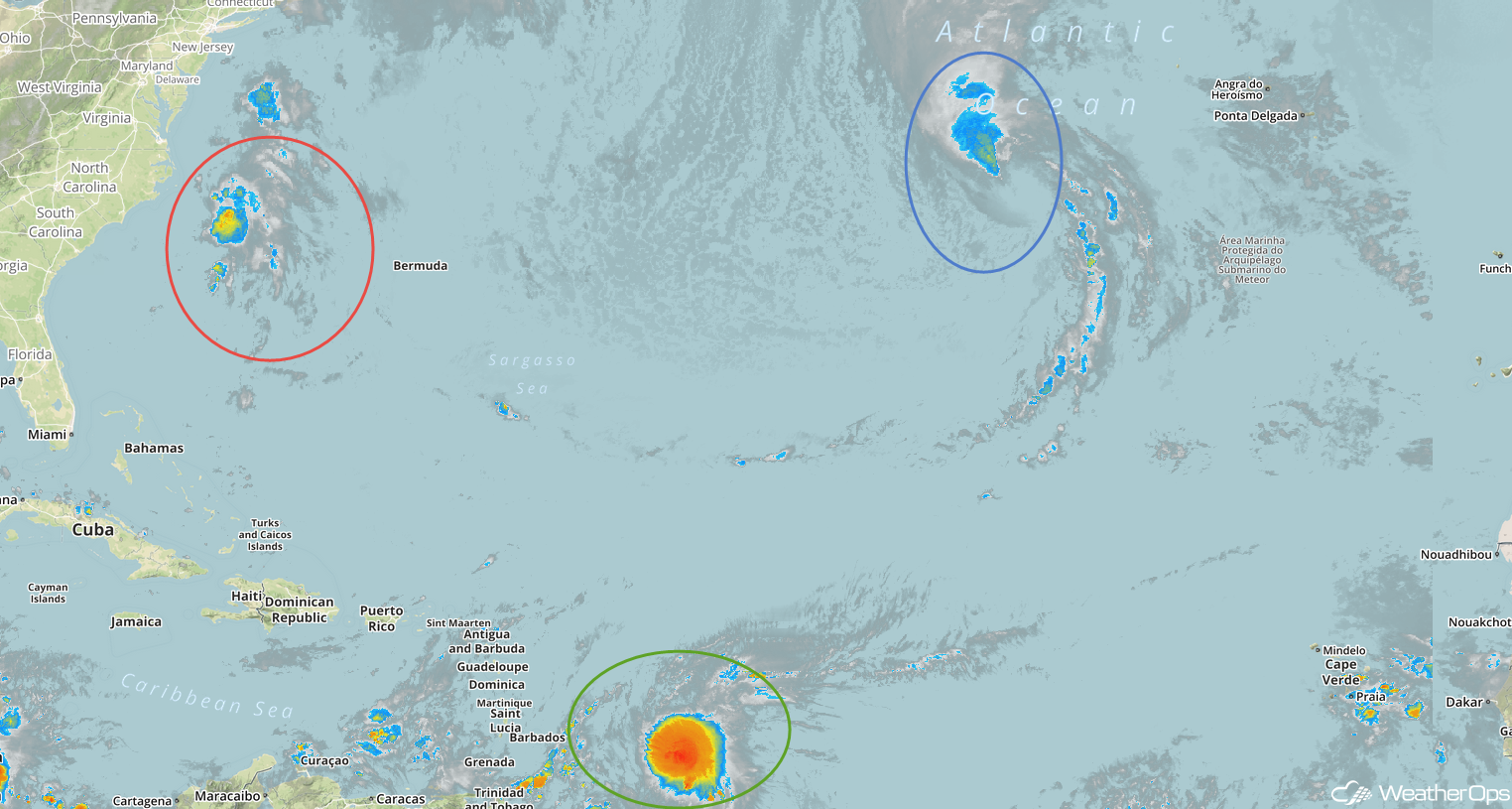 A Look Ahead
Showers and thunderstorms are forecast to develop along the Texas and Louisiana coasts on Saturday, and may continue into Sunday. A cold front will be the focus for the development of thunderstorms Monday across the Upper Midwest and Great Lakes. This activity will move into the Great Lakes and Ohio Valley on Tuesday.