Thunderstorms are expected across the Southeast through Thursday as Hurricane Michael makes landfall in the Florida Panhandle Wednesday afternoon. In addition, excessive rainfall is likely across the Southeast and Mid Atlantic through Thursday. Elevated winds and seas will continue across the Gulf of Mexico through early Thursday morning. A cold front will be the focus for the development of thunderstorms across the Midwest on Wednesday. Snow will continue for portions of the Upper Midwest. Across portions of Wyoming, snow is expected to continue through mid-afternoon. 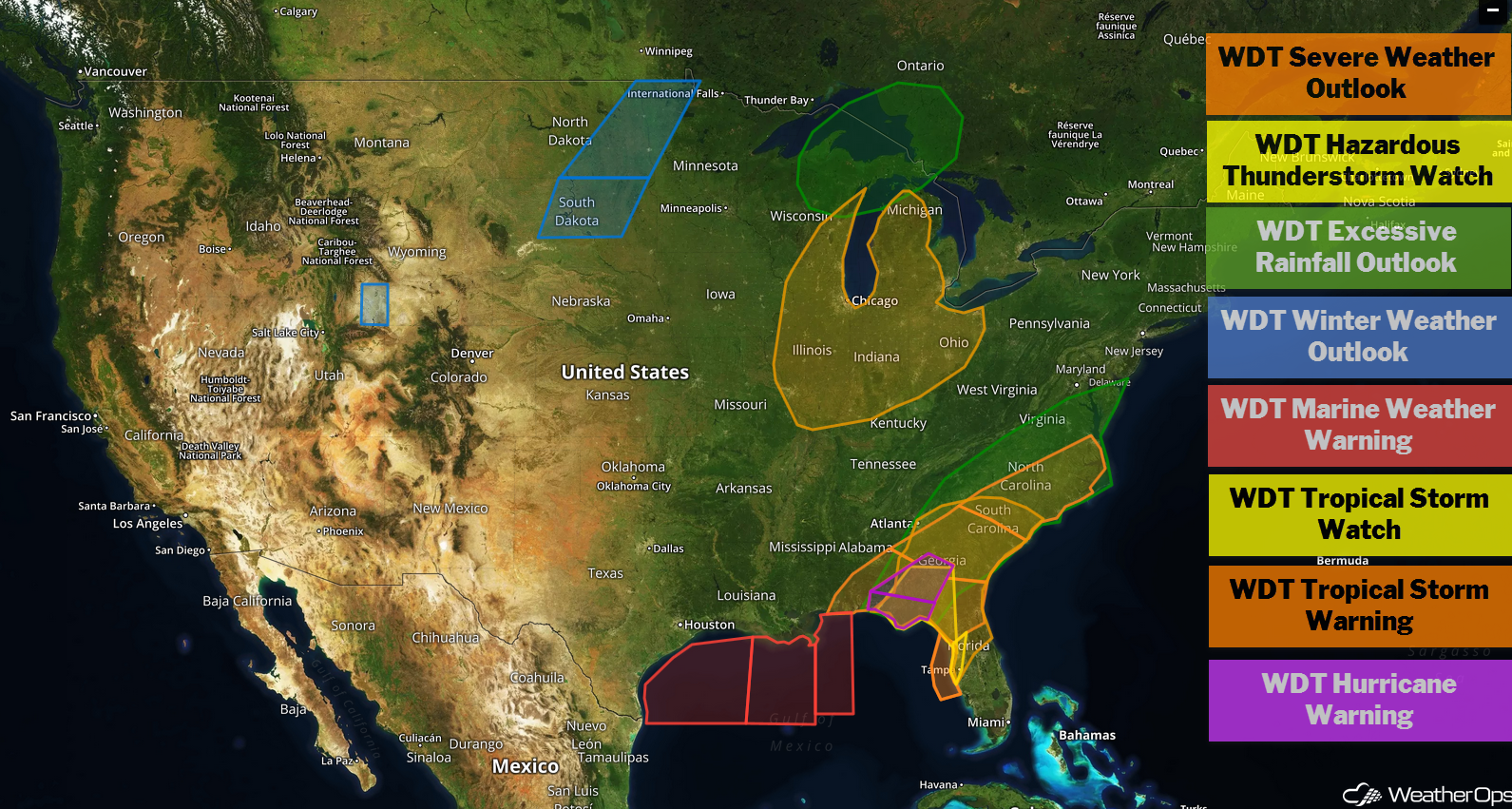 Thunderstorms for the Southeast through Thursday
As Hurricane Michael makes landfall over the Florida Panhandle today and moves through the Southeast on Thursday, damaging winds can be expected. In addition, associated thunderstorm squalls will bring an increased risk for brief tornadoes. 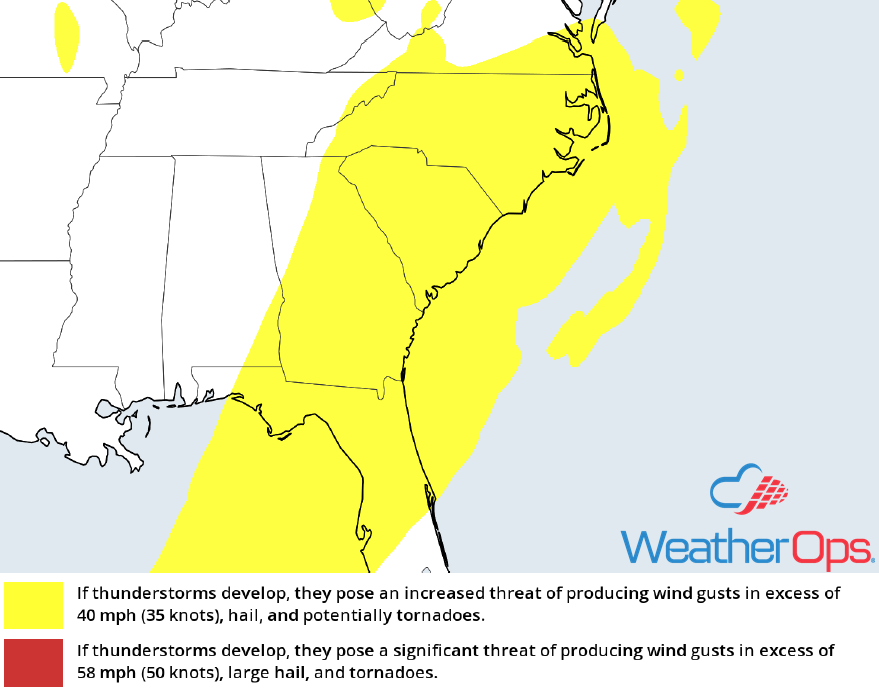 Thunderstorm Risk for Wednesday and Thursday

Excessive Rainfall through Thursday for the Southeast and Mid Atlantic
In addition to the thunderstorm risk associated with Hurricane Michael, deep tropical moisture will spread northward and bring an increased potential for excessive rainfall. Rainfall accumulations of 5-10 inches with locally higher amounts in excess of 12 inches will allow for a risk for flooding and flash flooding. 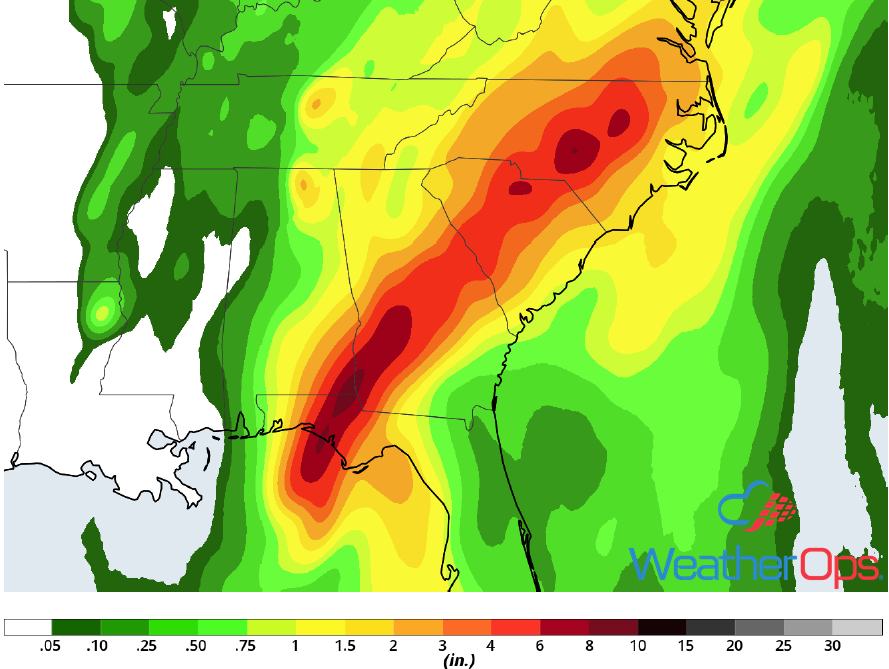 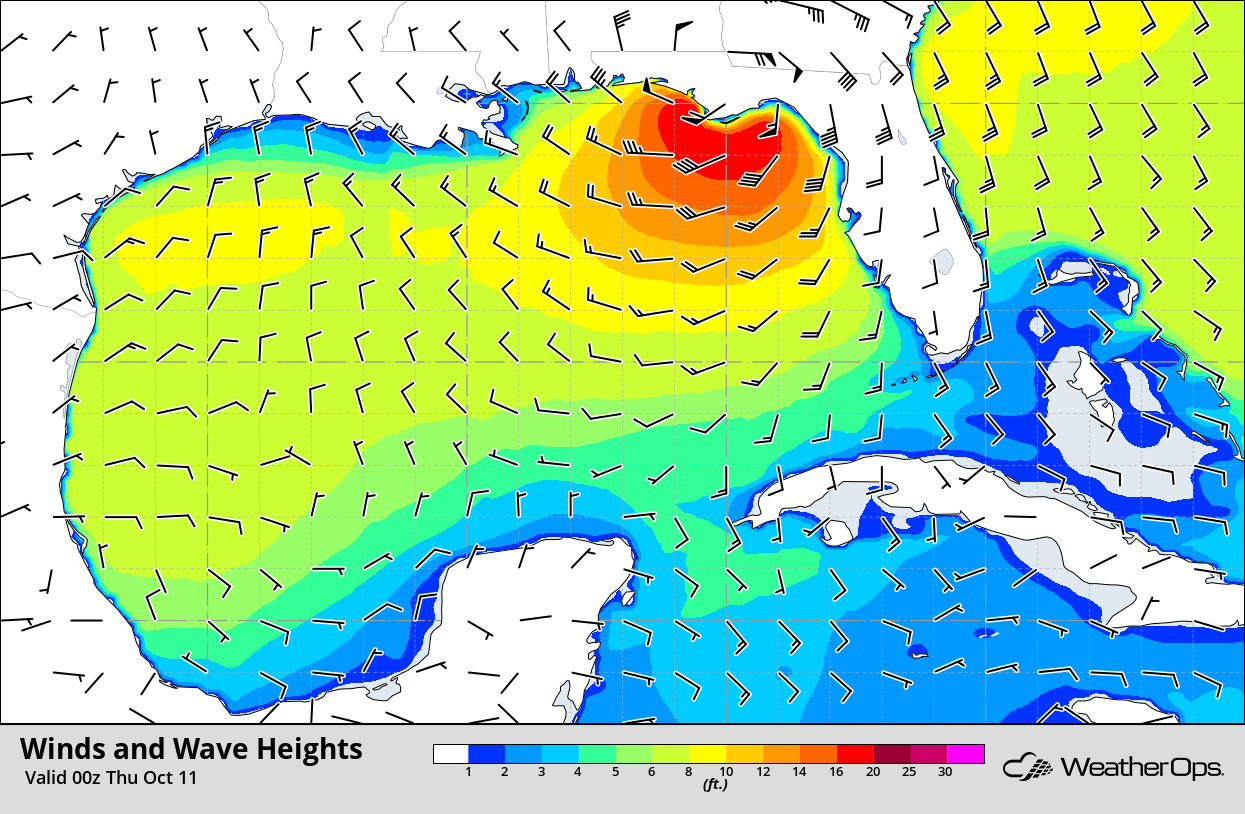 Risk for Thunderstorms Wednesday across the Midwest
A slow moving area of low pressure and cold front will promote isolated to scattered thunderstorm development on Wednesday. Conditions are not expected to be overly favorable for severe thunderstorms, but a few strong storms may produce gusty winds. 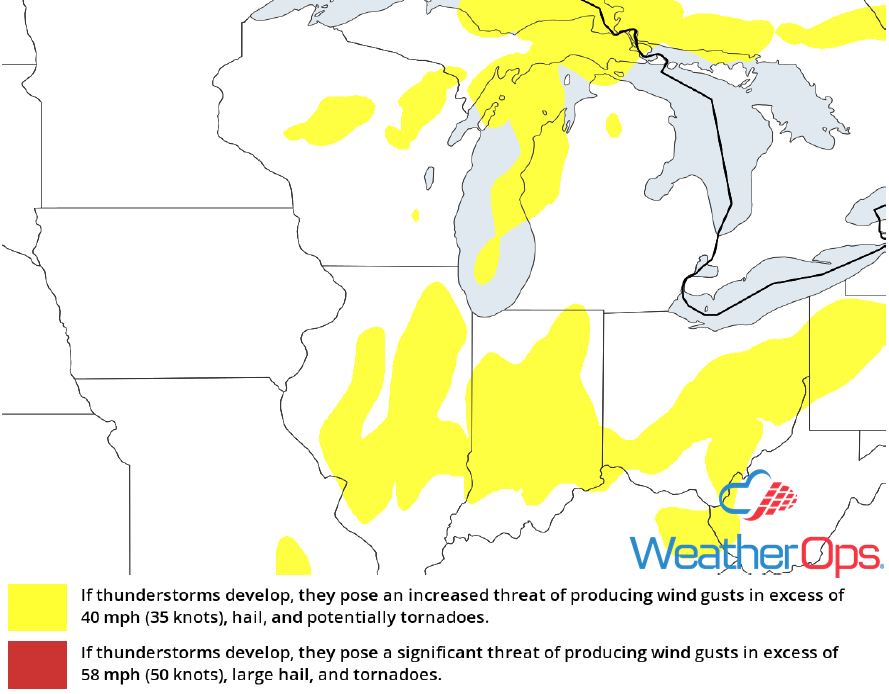 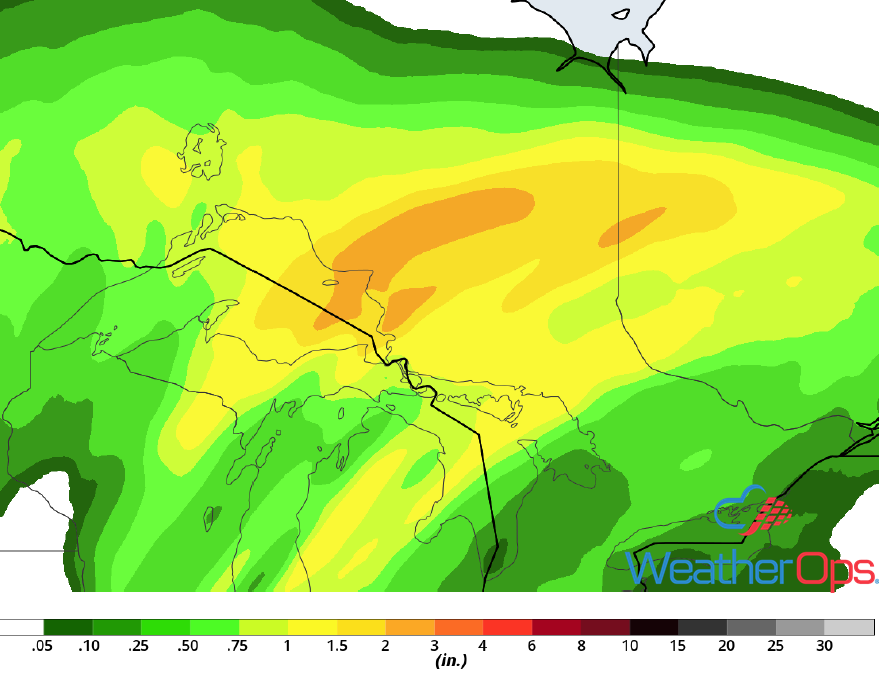 Continued Snow for Southwestern Wyoming on Wednesday
Snow will continue for portions of southwestern Wyoming through mid afternoon. Accumulations will range 2-4 inches with locally higher amounts in excess of 6 inches. Gusty winds could result in blowing snow and reduced visibilities. 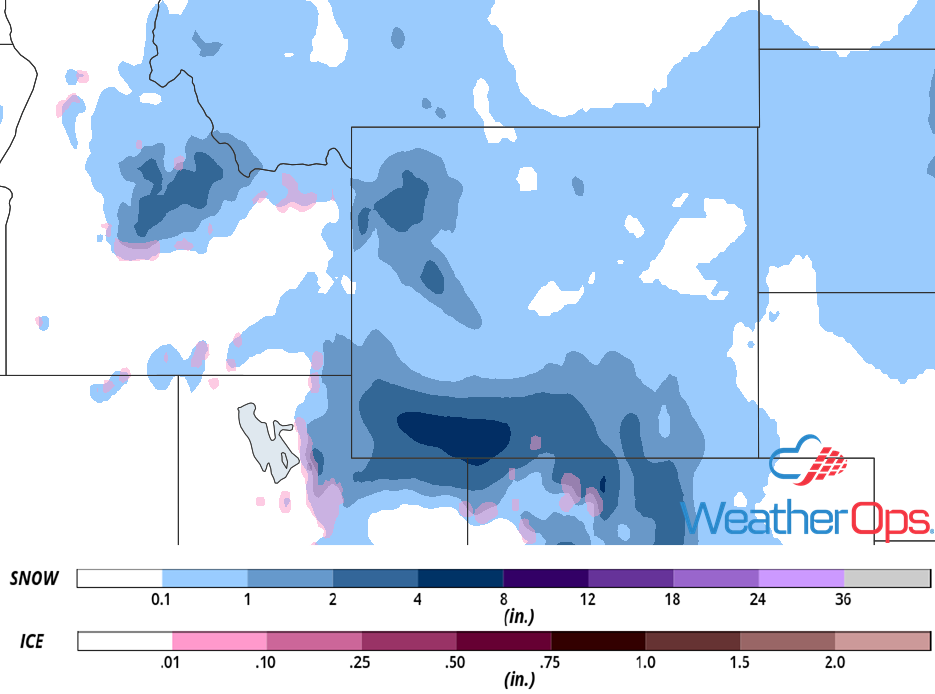 Thunderstorms Friday for Southwest Texas
The remnants of Sergio moving far inland combined with an increasing low level jet will allow for a low potential for thunderstorms across southwest Texas on Friday. While severe storms should be fairly isolated, any storms that develop could produce damaging winds and possibly an isolated tornado or two.

Tropical Update
Hurricane Michael (green oval) is 60 miles south-southwest of Panama City, Florida and is moving north-northeastward at 14 mph. A turn toward the northeast is expected this afternoon or tonight. Michael will increase in forward speed on Thursday. Landfall along the Florida Panhandle is expected early this afternoon as a category 4 hurricane. Maximum sustained winds are at 150 mph with higher gusts.

Hurricane Leslie (red oval) is 1130 miles southwest of the Azores and is moving south-southeastward at 7 mph. A slow turn toward the east-northeast is expected today followed by an increase in forward speed tomorrow through the early weekend. Maximum sustained winds are at 75 mph with higher gusts. Slow strengthening is expected during the next day or two, but weakening should begin by Friday.

Tropical Storm Nadine (blue oval) is 505 miles west-southwest of the southernmost Cabo Verde islands and moving northwestward at 7 mph. A turn toward the north-northwest is expected over the next couple of days followed by a turn toward the west-northwest. Maximum sustained winds are at 65 mph with higher gusts. Little change in strength is anticipated today, with weakening likely by tomorrow. Nadine is forecast to dissipate over the weekend.

A Look Ahead
Heavy rain is forecast over southwest Texas on Saturday as an area of low pressure develops. On Sunday, an upper level trough will move across portions of the Rockies, bringing a potential for snow to portions of Colorado and Wyoming. Light rain may continue Sunday across south Texas. By Monday, showers and thunderstorms will extend from the Mid-Mississippi Valley into south Texas ahead of a cold front. Light snow may develop across portions of the Northern Plains and Upper Midwest on Tuesday.