Thunderstorms may develop on Wednesday across portions of the Plains into the Upper Midwest. A few storms may also develop across the Northeast as a result of daytime heating on Wednesday. Tropical Storm Cindy will continue to impact the Gulf Coast today. Elevated conditions will continue across the Gulf of Mexico as a result of Tropical Storm Cindy. 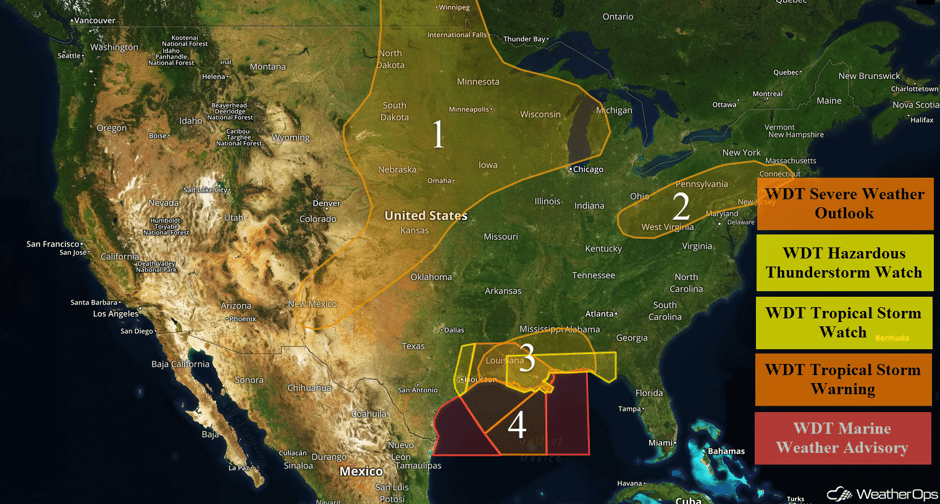 Thunderstorms from the Central and Northern Plains into the Upper Midwest on Wednesday
A broad area of the Plains and Midwest could see a threat for thunderstorms on Wednesday. Upslope flow will increase across the Central and Southern Plains. A cold front will also move into the Northern Plains this afternoon and tonight. Isolated winds and severe hail will be the primary threat with the stronger storms. The greatest area at risk for severe impacts will be across the Central Plains and Upper Midwest. Moderate to extreme instability is forecast to develop in the vicinity of a developing surface low. Large hail and severe winds will be the primary hazards, but a few tornadoes cannot be ruled out. Further south, a line of showers and thunderstorms may develop into the overnight hours from New Mexico into Southwest Kansas with a continued threat for marginally severe winds. 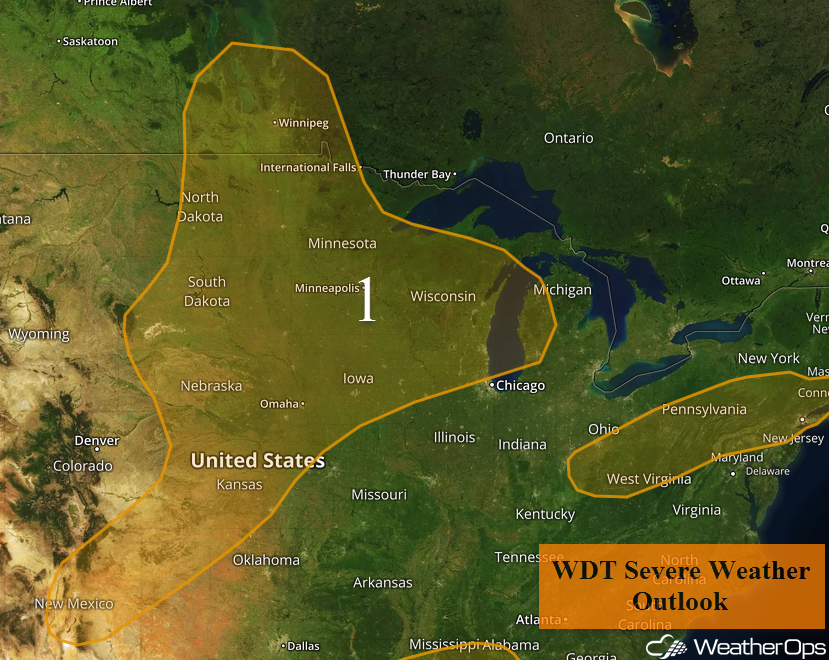 Tropical Storm Cindy Continues to Impact the Gulf Coast on Wednesday
Cindy is currently sitting just offshore of the Louisiana coast. Cindy's presence will bolster moisture content further inland throughout the day while providing favorable wind shear for rotating thunderstorms. Widespread shower and thunderstorm activity is forecast on Wednesday from Louisiana into Alabama. Any rotating thunderstorms within this activity will have a low to moderate chance of producing brief tornadoes. Rainfall totals of 3-6 inches with isolated higher amounts in excess of 8 inches will be possible and could lead to some flooding issues. Coastal storm surge of 1-3 feet is also expected. 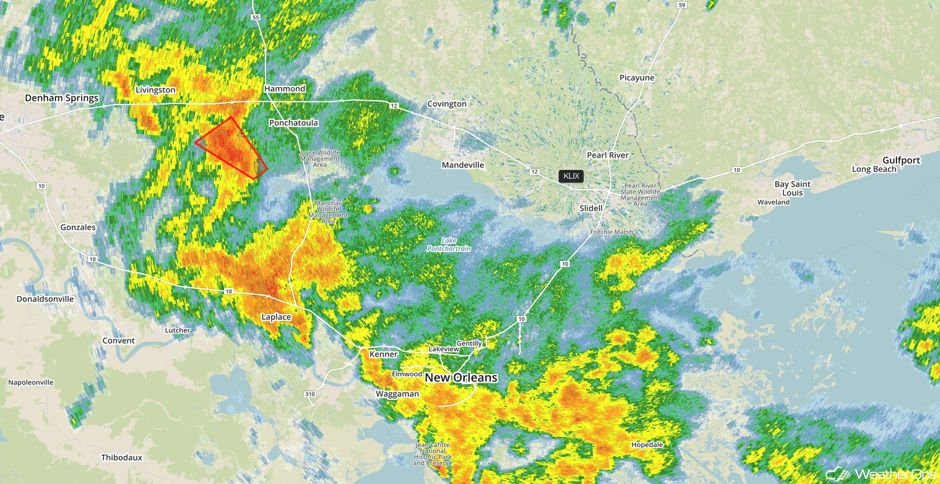 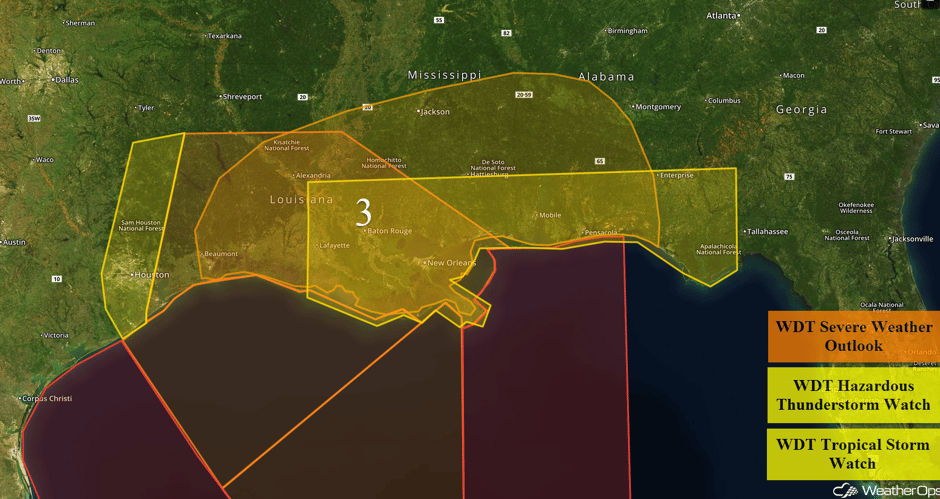 Elevated Conditions Continue Wednesday for the Gulf of Mexico
The center of Tropical Storm Cindy will continue to move northeastward and will have the potential to produce low end tropical storm conditions into the evening hours today. Winds of 30-45 knots with gusts in excess of 55 knots are expected. Swells of 10-18 feet (possibly approaching 20 feet in far western areas of Region 4 with thunderstorm squalls remaining a concern. There is also a low to moderate tornado threat. Tropical storm conditions should finally end by late evening. 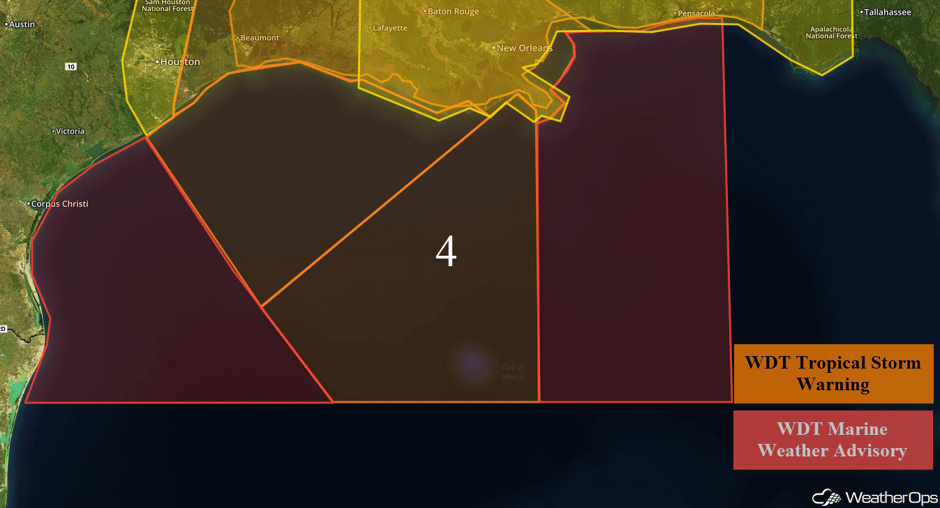 Thunderstorm Potential from the Central High Plains to Great Lakes on Thursday
A cold front will be moving through the region from Nebraska to the Great Lakes. Although some severe weather is expected to continue Thursday morning, more strong to severe thunderstorms are expected along the front once daytime heating increases instability across the area. Moreover, an upper level wave will be providing additional lift. Once storms develop, a few storms will become supercells with large hail, damaging winds, and isolated tornadoes possible. Storms that form lines will present more of a damaging wind risk. Several areas could get repeated rounds of heavy rainfall; rainfall amounts of 1-3 inches with locally heavier amounts in excess of 4 inches are expected.

To the southwest, a trough and dryline extending from western Kansas into the northern Texas Panhandle will be a focus for further thunderstorm development. Large hail and damaging winds will be the primary hazards with these storms.

Strong to Severe Thunderstorms Possible Thursday for the Lower Mississippi Valley
Tropical Storm Cindy should be moving inland in southeastern Texas and southwestern Louisiana on Thursday. Along with tropical storm force winds, there will be a continued threat for severe weather along and east of the storm's path. Moist unstable air forced northward by Cindy's circulation could allow for the development of strong to severe thunderstorms as far north as Kentucky. The primary threat will be damaging winds and continued heavy rainfall. Rainfall totals of 2-4 inches are expected with locally higher amounts in excess of 5 inches, mainly in eastern Texas into southwestern Louisiana. From southern Mississippi to the western Florida Panhandle and northward into Alabama, rainfall totals of 1-3 inches with locally higher amounts in excess of 4 inches are expected. 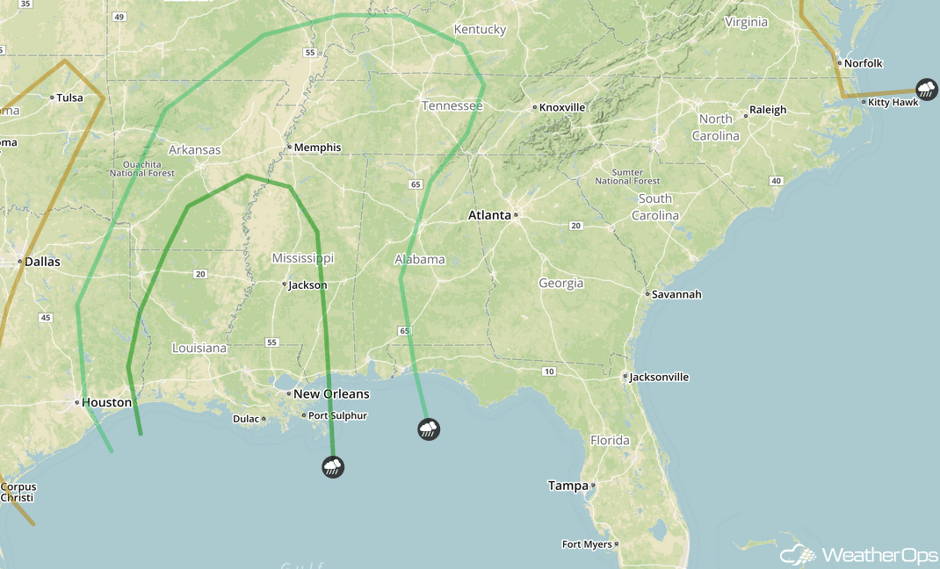 Thunderstorms for the Northeast on Friday
An approaching trough should provide enough lift along an approaching cold front for the development of isolated to widely scattered severe thunderstorms. Some of these storms could become supercells. Large hail and damaging winds will be the primary hazards, but an isolated tornado or two cannot be ruled out.

Potential for Thunderstorms Friday from the Ohio Valley to the Southern Plains
Showers and thunderstorms are expected to develop along a cold front entering the region. While widespread severe weather is not expected, some storms may produce damaging winds. 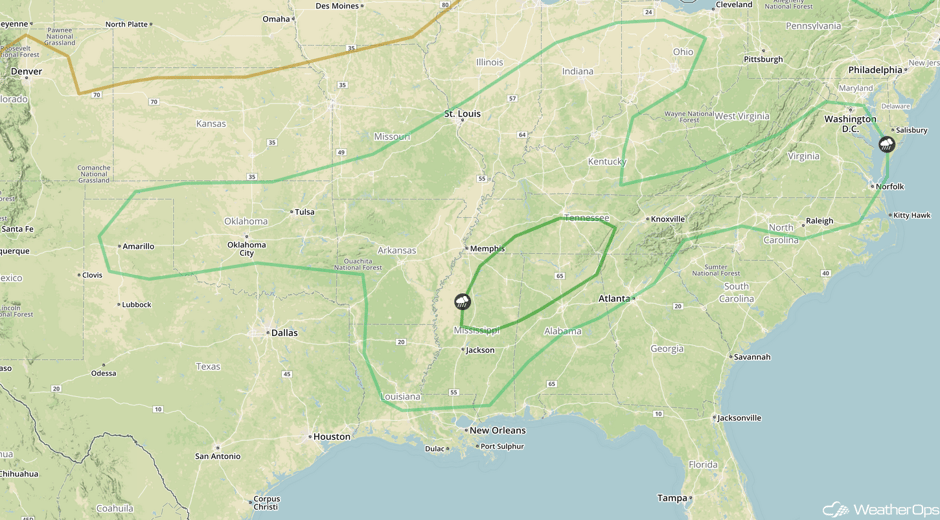 Risk for Thunderstorms across the Southern States on Friday
The low that used to be Tropical Storm Cindy should be in the Arklatex region by Friday morning, and should continue to generate heavy rainfall to the north and east where a warm front will be developing. Increased southerly flow caused by the remnant low will interact with an old frontal boundary across the region to allow for the development of widespread showers and thunderstorms. Some thunderstorms may be severe with damaging winds as the primary risk. An isolated tornado cannot be ruled out. Heavy rain will also be a concern with rainfall amounts of 2-4 inches with locally heavier amounts in excess of 5 inches possible. Rainfall could continue through Saturday.

Tropical Update
Tropical Storm Cindy is currently located 180 miles SE of Galveston, TX and is moving northwest at 10 mph. Winds are currently sustained at 45 mph. Cindy is expected to approach the coast of southwest Louisiana and southeast Texas today or tonight. Little change in intensity is expected before landfall.

A Look Ahead
Tropical Storm Cindy’s remnant low will continue to weaken, and should be in the lower Mississippi Valley on Saturday. Showers and thunderstorms will likely form along developing frontal boundaries to the southwest and northeast of the low.  Some of this weather could be locally severe, although the locations and timing are highly uncertain at this time. Increasing flow aloft could also provide the impetus for some severe storm formation. The primary threats with these storms would be damaging winds.

To the northwest, an area of rainfall could begin to develop in the western Plains. Strong easterly winds south of the high could provide an upslope component that will help in the development of showers and thunderstorms.