Severe thunderstorms are expected Wednesday across the Northern Plains and Upper Midwest along a stalled frontal boundary. Monsoonal rains are forecast to continue for the Intermountain West into the Southwest on Wednesday.

Severe Thunderstorms Expected for the Northern Plains and Upper Midwest on Wednesday
A complex of showers and thunderstorms is currently moving across portions of North Dakota. By late afternoon, marginal instability and strengthening winds aloft should allow for the development of isolated thunderstorms. Large hail and damaging winds will be the primary hazards with any storms that develop. From the Dakotas and Nebraska into the Great Lakes, thunderstorms will develop along a warm front. Any storms that develop in this region will have the potential for large hail, damaging winds, and isolated tornadoes. By late evening, thunderstorms will move into eastern portions of the region with large hail the primary hazard. 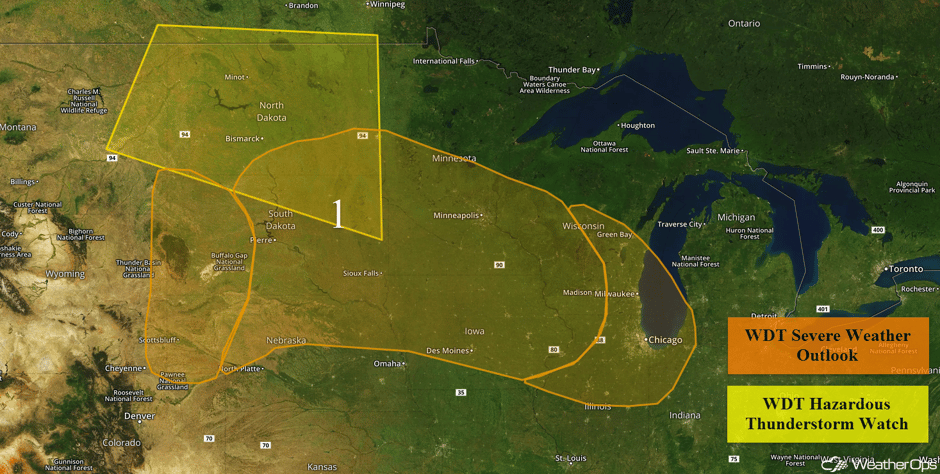 Thunderstorm Potential for Southern Arizona on Wednesday
Widely scattered thunderstorms are likely to develop over the higher terrain of southern Arizona early this afternoon. An upper level disturbance combined with adequate moisture at the surface will yield a low threat of damaging winds within some of the more organized storms that form. The primary threat will be between 1pm and 9pm local time. 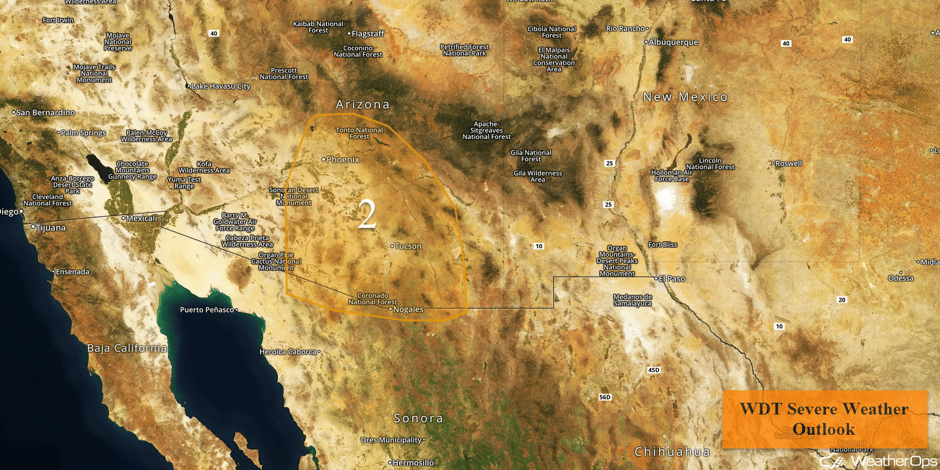 Continued Excessive Rainfall through Friday for the Intermountain West and Southwest
Monsoonal rains will slowly spread eastward across portions of the Intermountain West and Southwest through Friday. Rainfall amounts of 1-2 inches with locally higher amounts in excess of 3 inches are forecast. Daily rainfall amounts should be less than 0.75 inch. There may be an increased risk of flooding and runoff as well. 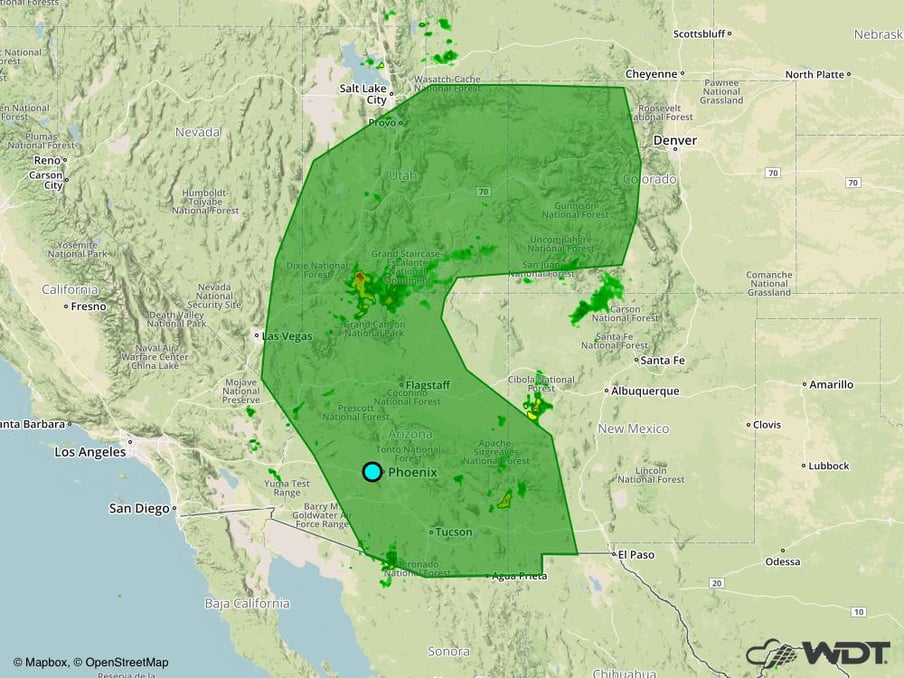 Risk for Thunderstorms Thursday across the Northern Plains
A weak trough aloft is forecast to move across the region with a warm front lifting northward. Along the front, instability is forecast to develop into the afternoon leading to strong to severe thunderstorms. Strong wind gusts and hail will be the primary hazards, as well as frequent lightning and heavy rainfall. 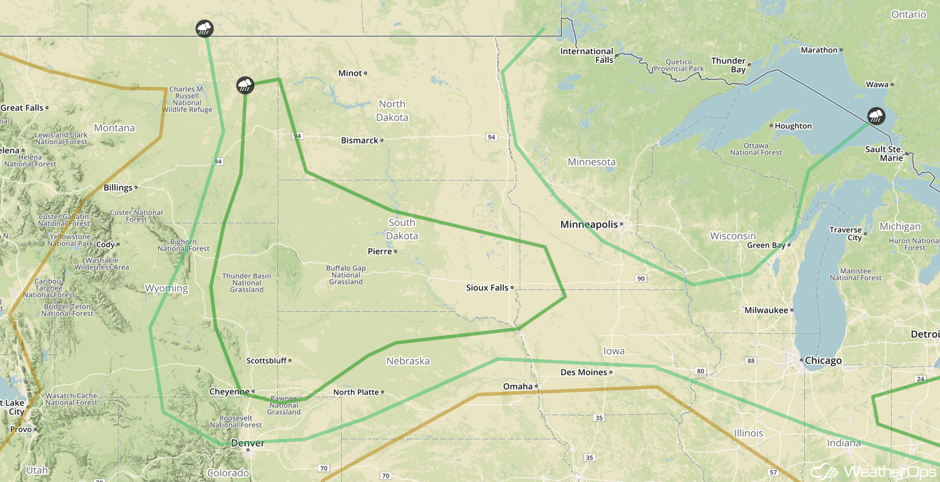 Potential for Thunderstorms from the Midwest to the Northeast on Thursday
Lingering precipitation from overnight thunderstorms are forecast throughout the region into the morning hours. As a result, there is some uncertainty in the overall coverage of activity into Thursday. However, some strong to severe thunderstorms will be possible. Ahead of an area of low pressure and cold front, daytime heating along with outflow boundaries in the region will lead to some lift for the development of strong to severe thunderstorms into the afternoon and evening. Strong wind gusts and hail along with frequent lightning and heavy rainfall are the main severe weather threats on Thursday. Thunderstorms may continue into the evening and overnight hours.

Thunderstorms for the Plains into the Midwest on Friday
Thunderstorm activity from the overnight hours will linger into the morning with heavy rain the primary hazard. Into the afternoon, daytime heating will allow instability to build ahead of an area of low pressure. With some upper level support, strong to severe thunderstorms capable of strong wind gusts, large hail, frequent lightning, and heavy rainfall may develop. 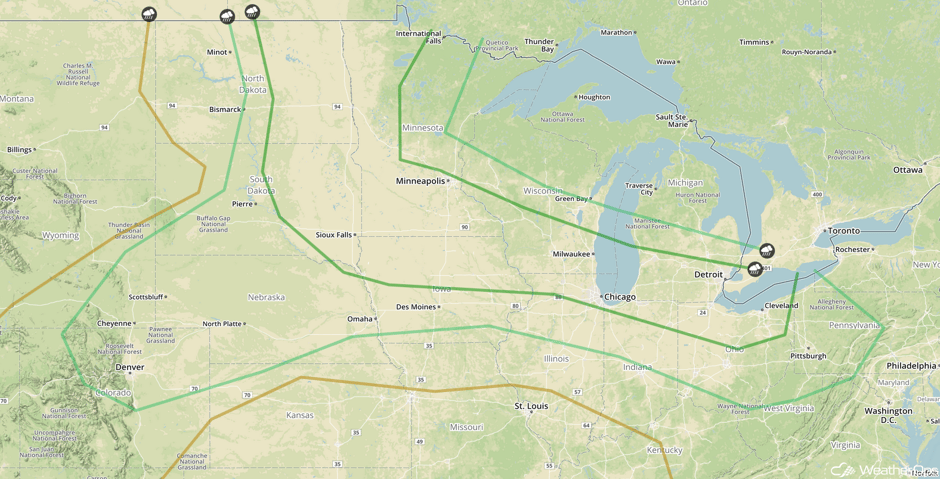 Tropical Update
An area of low pressure between the Cabo Verde Islands and the Lesser Antilles is producing a large area of disorganized showers and thunderstorms. Some development is possible over the next day or two while it moves toward the west-northwest or northwest at 10-15 mph. After that time, environmental conditions are forecast to become unfavorable for development.

A Look Ahead
Thunderstorms, some severe, are forecast across the Ohio Valley on Saturday as a cold front moves eastward. By Sunday, this activity will spread into the Appalachians.