Heavy to excessive rainfall will continue across California through Thursday as a series of low pressure systems move across the region. These systems will bring heavy snow to the Sierra Nevadas through Thursday. Snow is forecast through Saturday morning across the Rockies.

Excessive Rainfall across California through Thursday
Rain associated with an area of low pressure will continue into Wednesday morning. During the afternoon, a second area of low pressure and cold front are expected to push onshore with the risk for heavy to excessive rainfall and flooding continuing. By late Thursday evening, rain is expected to finally end across the region with only lingering showers expected. Rainfall accumulations of 1.50-2.50 inches are forecast with locally higher amounts in excess of 4 inches. Flash flooding and flooding, along with mudslides, will be possible due to the rainfall over the past few days, especially in regions previously impacted by wildfires. 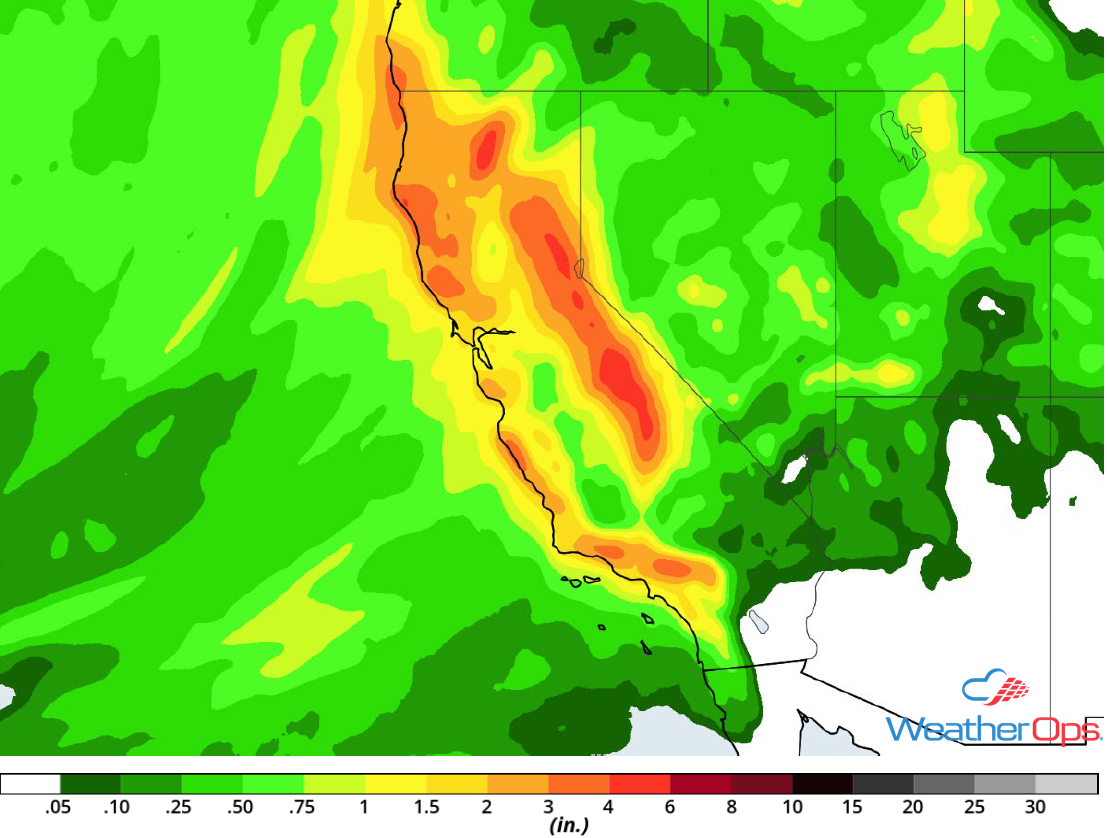 Continued Snow through Thursday across the Sierra Nevadas
A broad area of low pressure, combined with ample amounts of moisture from the Pacific, is forecast to move across California. This will lead to continued snowfall across the Sierra Nevadas. Blizzard conditions will occur as winds 35-40 mph with gusts in excess of 55 mph are expected in the higher elevations. Power outages and tree damage are likely in some areas with very difficult driving conditions. Total snowfall accumulations of 18-24 inches are expected in the valleys. In the higher elevations, 2-5 feet are forecast. This will lead to a potential for avalanches. 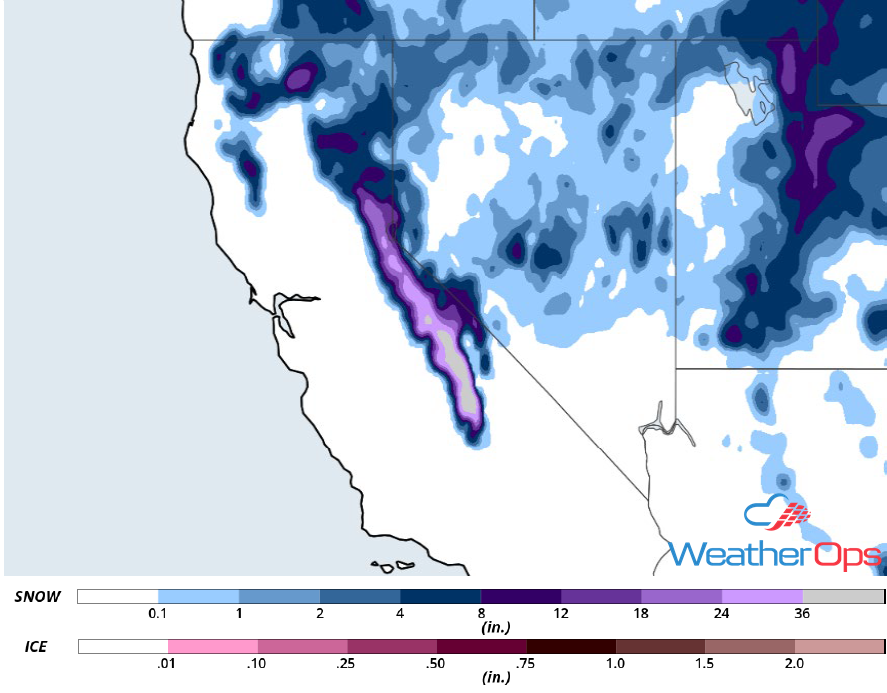 Snow for the Rockies through Saturday Morning
Two rounds of winter weather are expected Wednesday through early Saturday morning. The initial round of snowfall is forecast on Wednesday with light snow likely Wednesday night into Thursday morning. During the day on Thursday, temperatures will rise, leading to a rain/snow mix while snowfall continues in the higher elevations. A break in the precipitation will come Thursday night into Friday. The second round will begin Friday afternoon. Late Friday night into early Saturday morning, precipitation will change over to snow with light accumulations in the lower elevations. Accumulations of 2-6 inches are forecast in the valleys. In the higher elevations, 6-12 inches of snow are forecast. 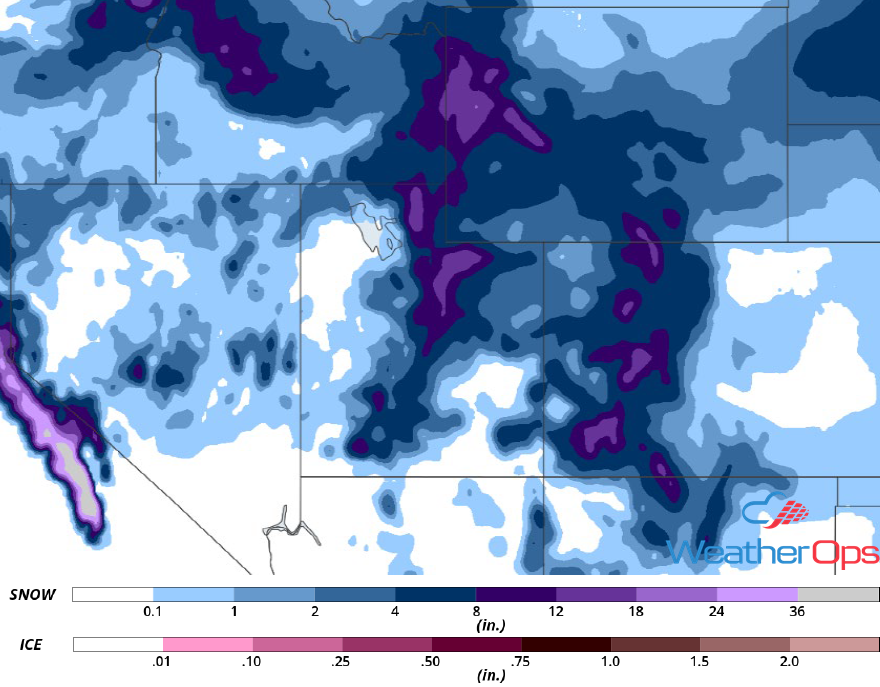 Potential for Snow Friday across the Northern Plains
An area of low pressure is forecast to develop across Nebraska Thursday night into Friday. To the north of the low, precipitation is forecast to move across the area. With temperatures well below freezing, moderate snow is expected across South Dakota into southwestern Minnesota and northwestern Iowa. Accumulations will range 5-7 inches with locally higher amounts in excess of 8 inches. While winds will not be particularly strong, wind chills could be as low as -15°F. 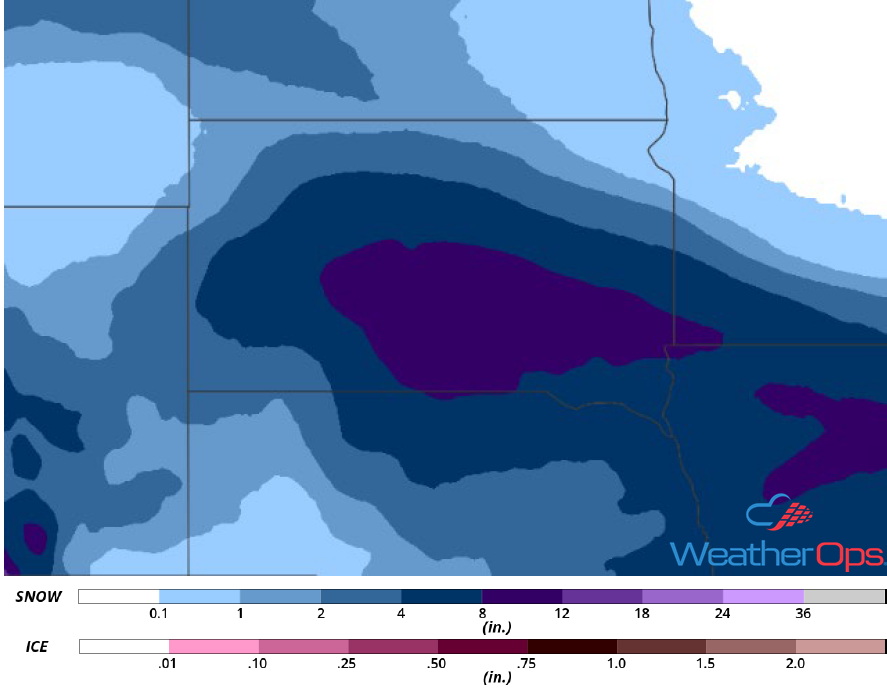 Snow Accumulation for Thursday and Friday

Snow from the Central Plains into the Midwest Friday and Saturday
An area of low pressure is expected to develop south of the region Friday night into Saturday and move eastward through Oklahoma into Arkansas, Tennessee, and Kentucky. Temperatures will be below freezing across Kansas, Missouri, and portions of the Midwest. With temperatures below freezing and precipitation to the north of the warm front, moderate to heavy snowfall may develop. Snow accumulations of 8-10 inches with locally higher amounts are expected within the heaviest bands. Along the front, a wintry mix may develop. There remains some uncertainty in the location of the low and the heaviest snowfall. 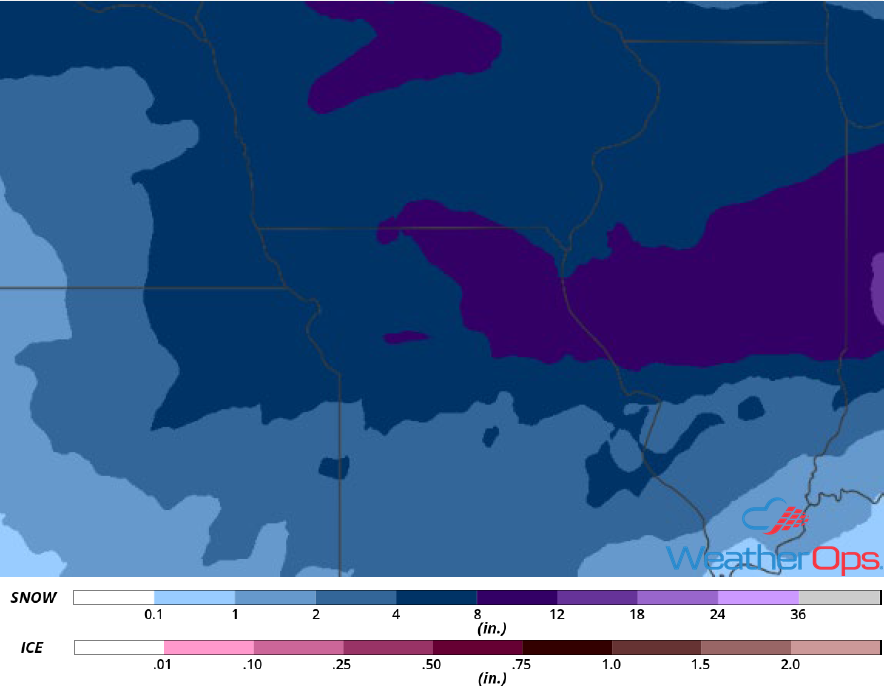 Snowfall Accumulation for Friday and Saturday

Thunderstorms Friday across Texas
A cold front is forecast to progress eastward across Texas and far southern Oklahoma throughout the day on Friday with warm, moist air moving northward from the Gulf of Mexico. Showers are forecast to develop initially with some instability building aloft. This will lead to the potential for high based thunderstorms. Large hail will be the primary hazard, but some strong wind gusts cannot be ruled out. 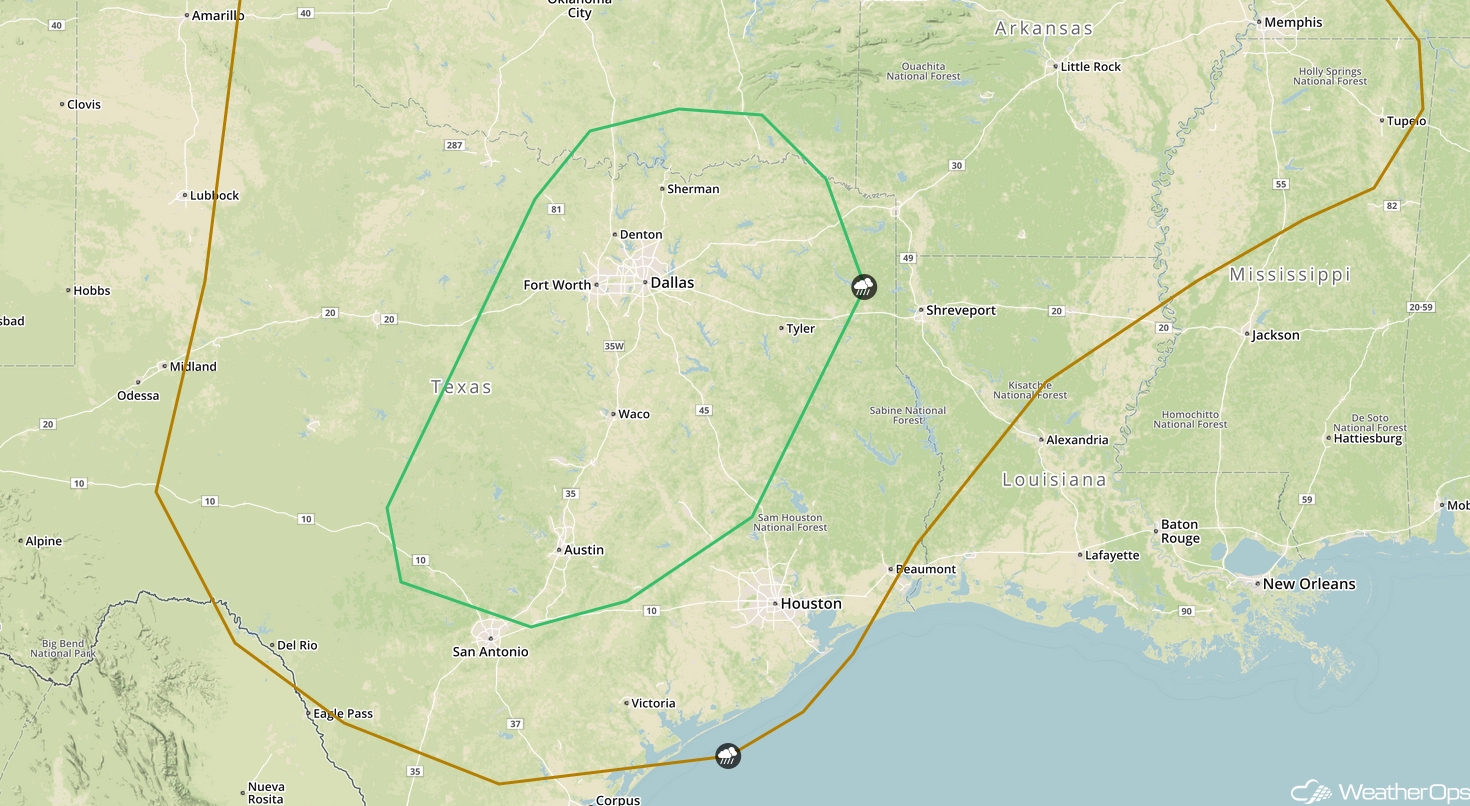 A Look Ahead
Showers and thunderstorms will move into the Southeast on Saturday as an area of low pressure continues to move eastward. On Sunday, snow will extend from the Appalachians into New England. An area of low pressure may bring snow to portions of the Northern Rockies and Plains on Monday. Snow is forecast across the Midwest and Great Lakes on Tuesday.