Thunderstorms from Texas into the Ohio Valley on Wednesday
A stalled front lies across the central US, extending from an area of low pressure over northwest Texas, across southern Oklahoma, and northeastward over the Ohio Valley. Warm moist air is being brought northward and southerly winds are increasing ahead of an upper level trough. Storms that developed overnight should become stronger today as disturbances move across the region. Additional storms will develop this afternoon along the front from Arkansas northeastward during the day. As the low moves eastward, the potential will shift from north central Texas into Arkansas. Damaging winds will be the primary hazard, but an isolated tornado or two cannot be ruled out. 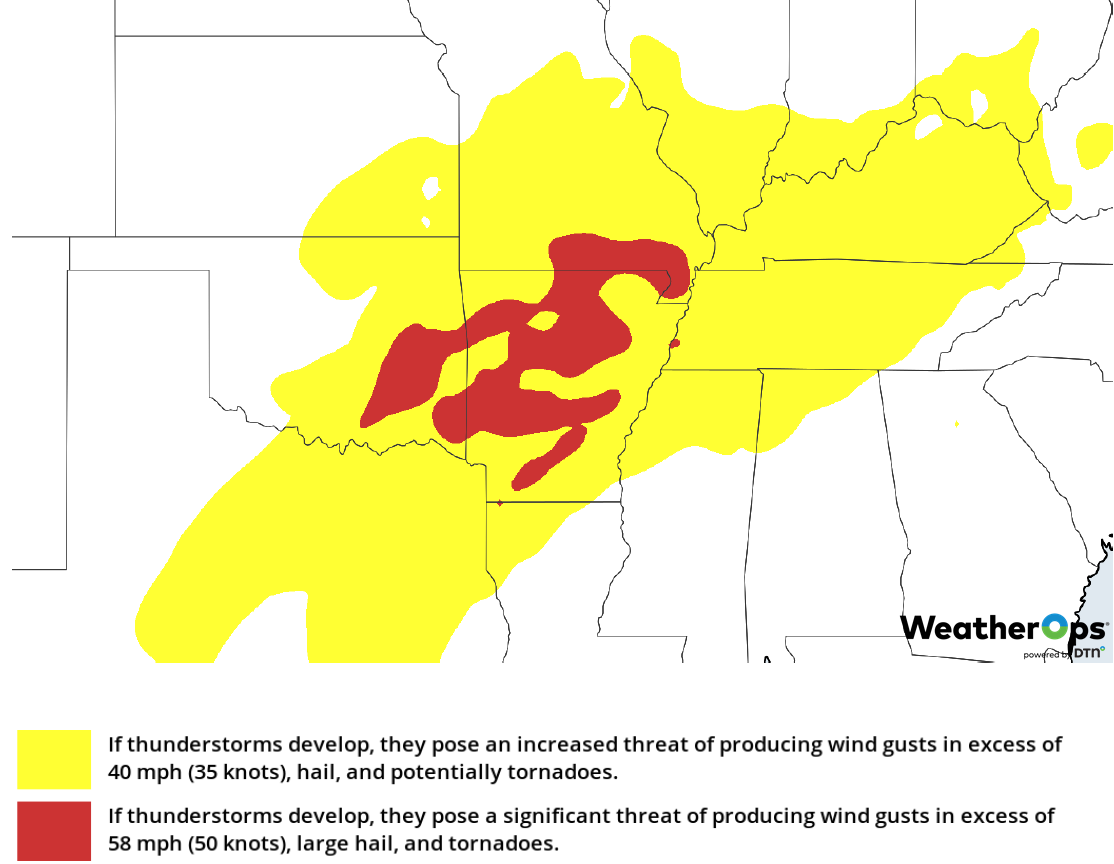 Freezing Rain from the Plains into New England through Thursday
Southwesterly flow aloft ahead of a slow moving area of low pressure over the western US is producing a wintry mix from the Central Plains across the Great Lakes. Precipitation will move into New England later today and into Thursday. Freezing rain began Tuesday night across the Upper Midwest; freezing rain accumulations up to 0.40 inch and about an inch of sleet are forecast across portions of Illinois and Michigan. Precipitation will move eastward, producing freezing rain accumulations ranging 0.10-0.20 inch from eastern Michigan into New England. Travel conditions could be hazardous. 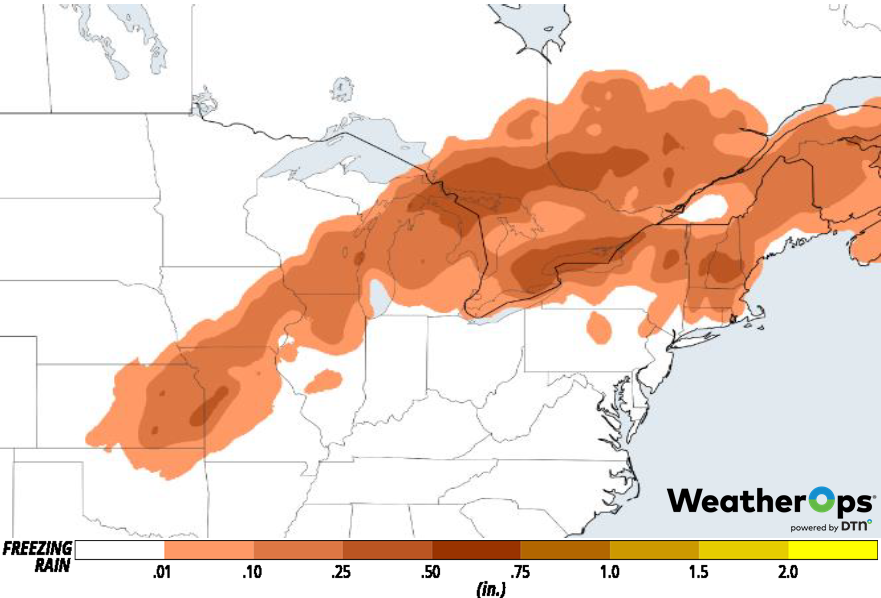 Dense Fog along the Gulf Coast through Early Thursday Morning
Areas of dense fog have developed along portions of the Gulf Coast. Light onshore winds will continue to move warm moist air toward the coast, allowing fog to continue through Thursday morning. Visibilities will be less than a quarter mile at times.

Snow through Friday from the Rockies into the Great Lakes
A strong area of low pressure is forecast to develop in the Central Plains on Wednesday and move toward the Great Lakes. Snow is expected to develop to the north and west of the track. Accumulations of 4-7 inches are forecast across portions of Nebraska Wednesday and Thursday. Snow will track northeastward as the low intensifies. Across Minnesota and northern Wisconsin, snowfall amounts will range 8-14 inches through Friday. Accumulations of 2-4 inches with locally higher amounts in excess of 6 inches are expected in the Dakotas. Along with the snow, gusty north winds will allow for reduced visibilities due to blowing snow and wind chills as low as -20°F Thursday night. 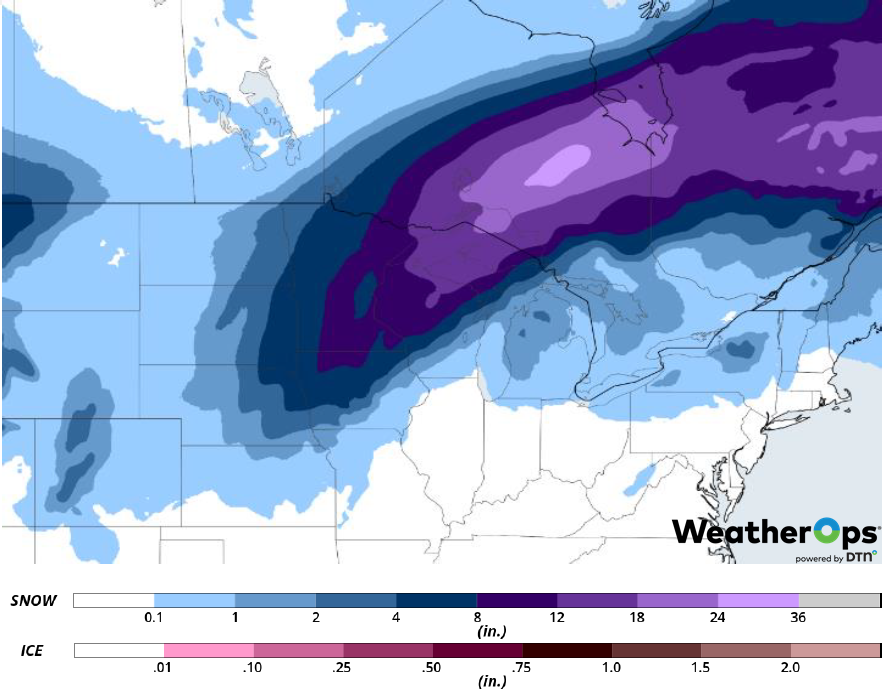 Potential for Thunderstorms from the Arklatex into the Ohio Valley on Thursday
As an area of low pressure develops in the Plains and moves northeastward, it will continue to push the associated cold front eastward. The front should move across the Mid-Mississippi Valley during the day, producing severe thunderstorms from the Arklatex region into the Ohio Valley. The main risk will be in the morning. Damaging winds and an isolated tornado or two will be the primary hazards with these storms. 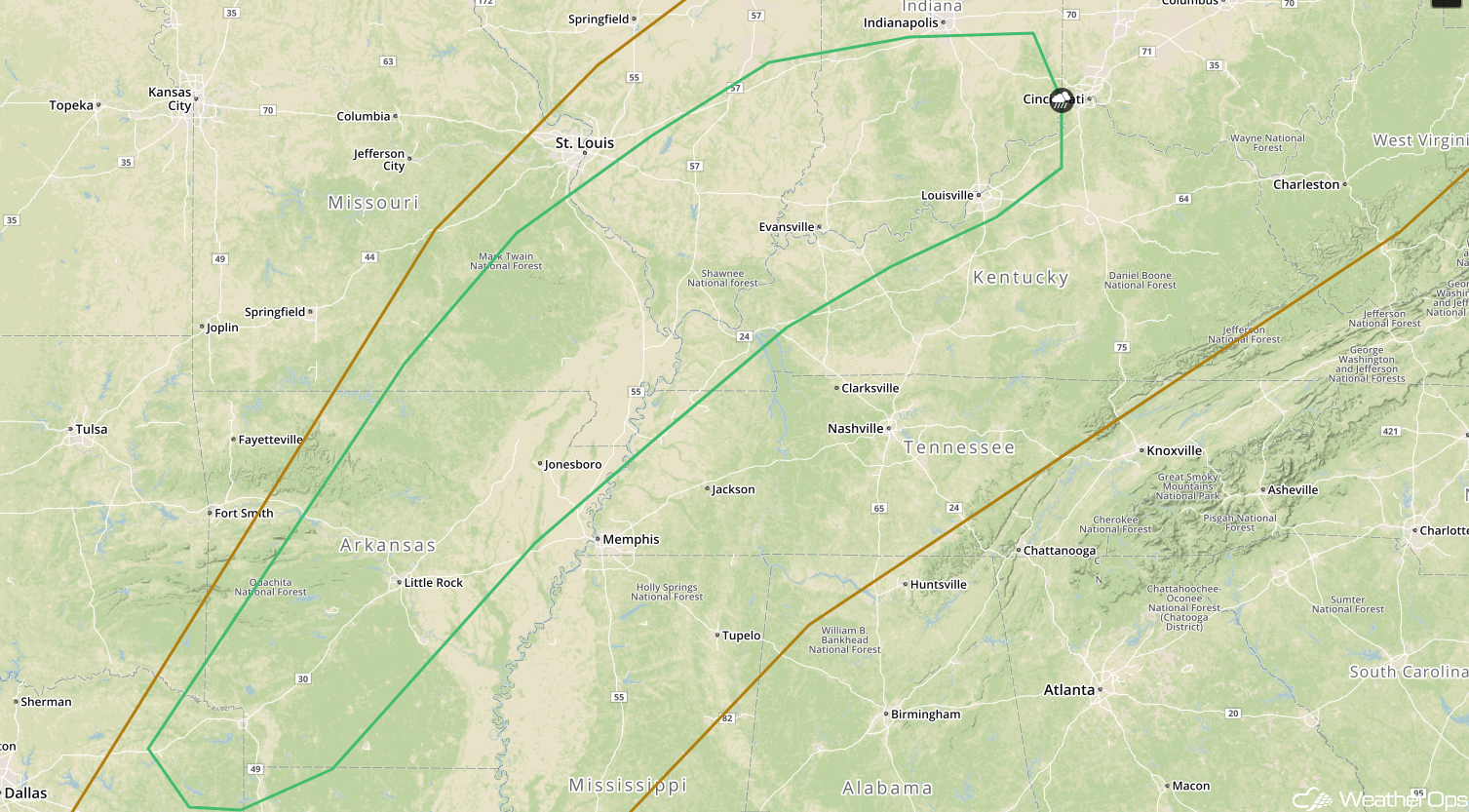 A Look Ahead
An area of low pressure will bring snow to the Pacific Northwest on Saturday. Snow is expected across the Plains on Saturday with freezing rain extending from the Missouri Valley into the Mid Mississippi Valley.  On Sunday, this activity will move into the Great Lakes and Midwest. Showers and thunderstorms may extend from Texas into the Lower Mississippi Valley on Monday. A wintry mix may develop Tuesday across the Plains and Midwest.