An upper level trough will bring a potential for thunderstorms across the Northern Plains Tuesday and Wednesday. Rain will continue along the Texas coast through Wednesday, posing a risk for excessive rainfall and flash flooding. Hurricane Florence is expected to move between Bermuda and the Bahamas through Wednesday before approaching the Carolina coast on Thursday.

Thunderstorms across the Northern Plains through Wednesday
An upper level trough and associated surface low moving out of the Rockies will provide a favorable environment for strong thunderstorms this evening and tomorrow evening, Storms will likely develop in the late afternoon along a cold front and move northeastward overnight. Strong winds and small hail will be the primary hazards. A few storms may become supercellular as storms initially develop. 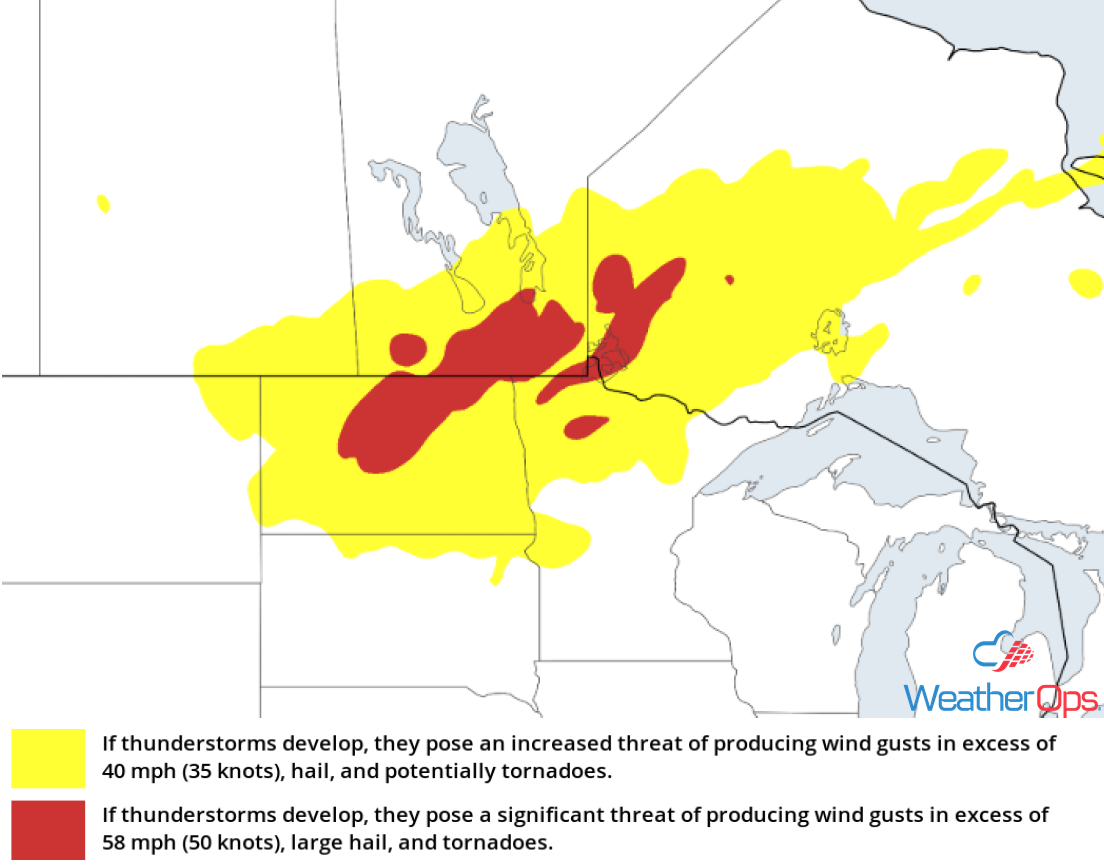 Thunderstorm Risk for Tuesday and Wednesday

Excessive Rainfall through Wednesday along the Texas Coast
Scattered showers will continue today and tomorrow as tropical moisture moves northward. There will be a risk for flash flooding with the stronger storms. Two day rainfall totals will range 2-4 inches with locally higher amounts. 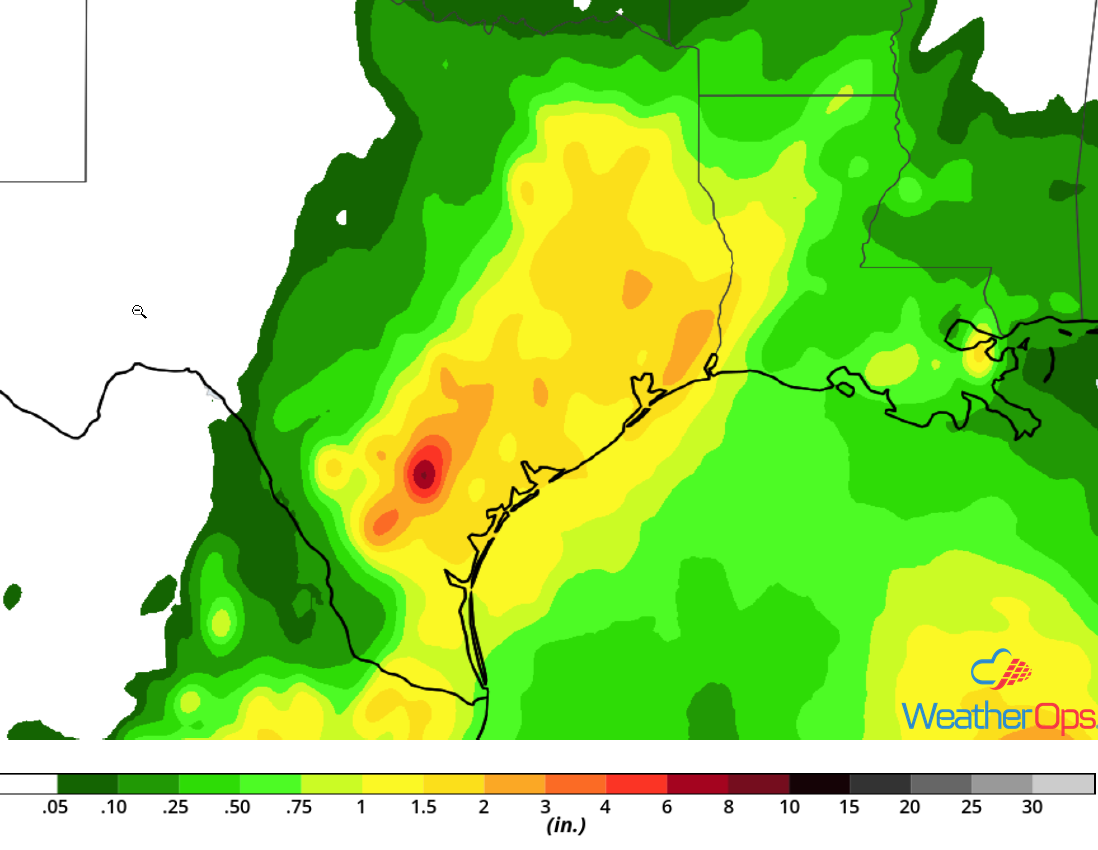 Potential for Thunderstorms across North Carolina and the Mid Atlantic on Thursday
Ahead of Hurricane Florence's landfall, favorable wind shear and instability could lead to scattered thunderstorms; a few tornadoes and/or waterspouts will be possible across North Carolina into Virginia. The location of these storms will likely follow wherever the right front quadrant of Florence is, since that is where the greatest wind shear will be present. These storms will likely occur Thursday night into early Friday morning. 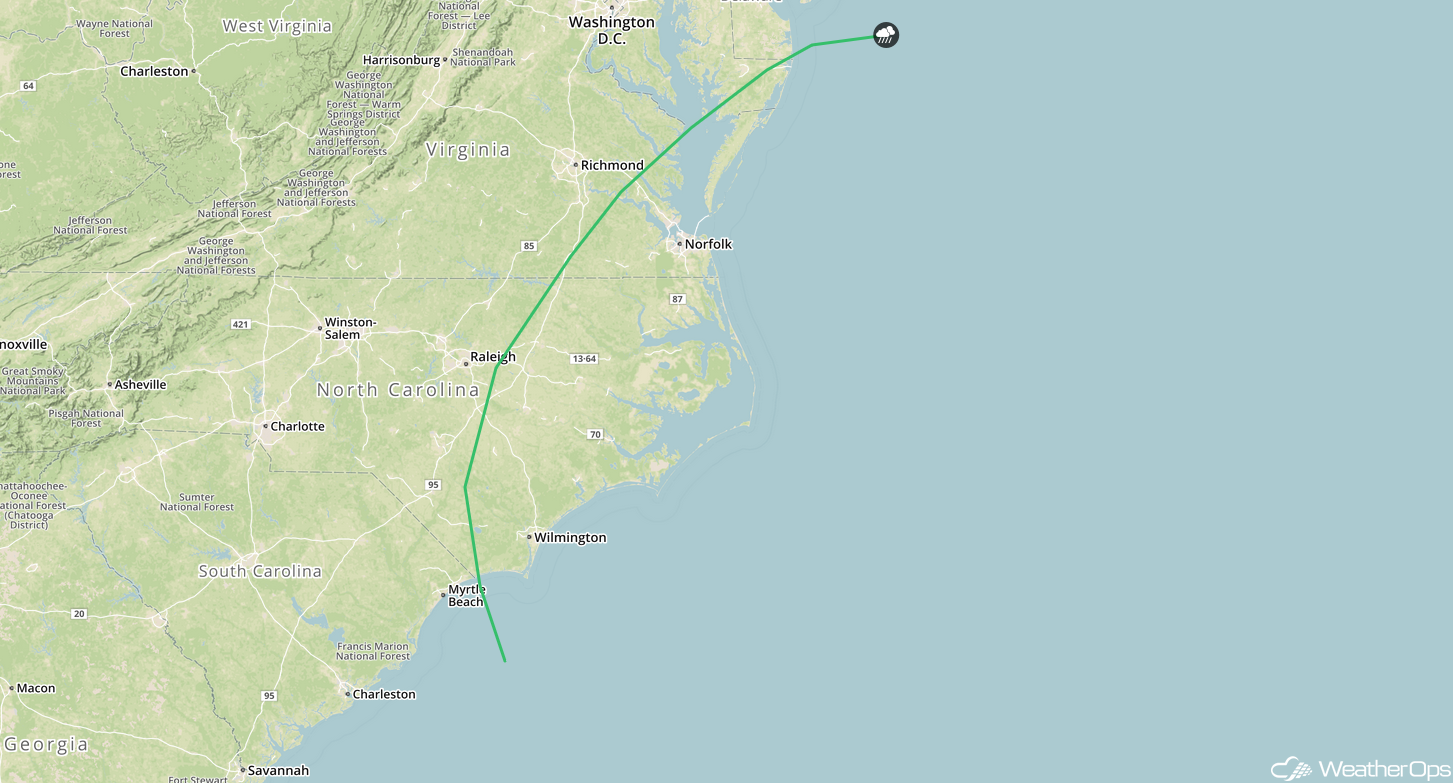 Excessive Rainfall Thursday for North Carolina and the Mid Atlantic
Torrential rainfall associated with Hurricane Florence is expected to begin late Thursday as the storm makes landfall very early Friday morning. A stationary front stretching across the southeastern US will cause the storm to stall and bring catastrophic flooding to portions of North Carolina and Virginia. Rainfall amounts will range 2-10 inches with locally higher amounts. 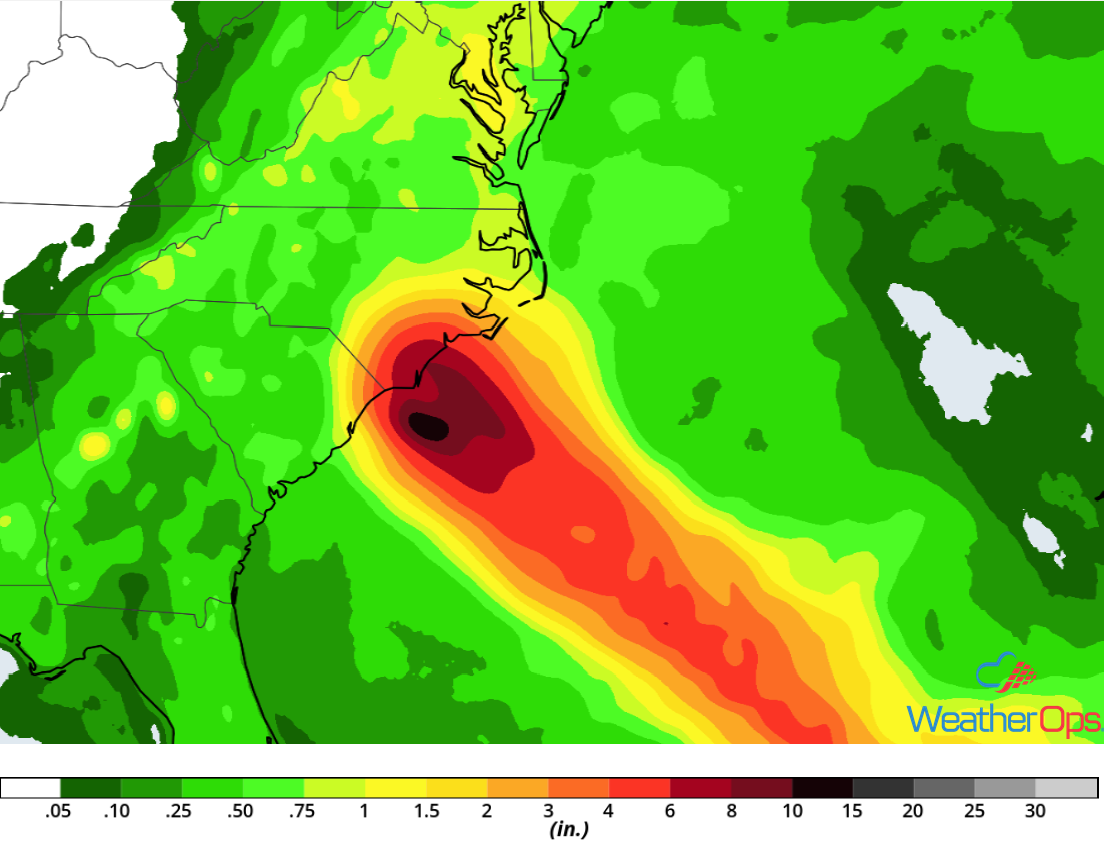 Risk for Excessive Rainfall along the Texas Coast Thursday
Continued tropical moisture will bring heavy rain showers along a frontal boundary. Rainfall amounts will range 1-2 inches. Areas that have already received heavy rainfall will have the potential for flash flooding. 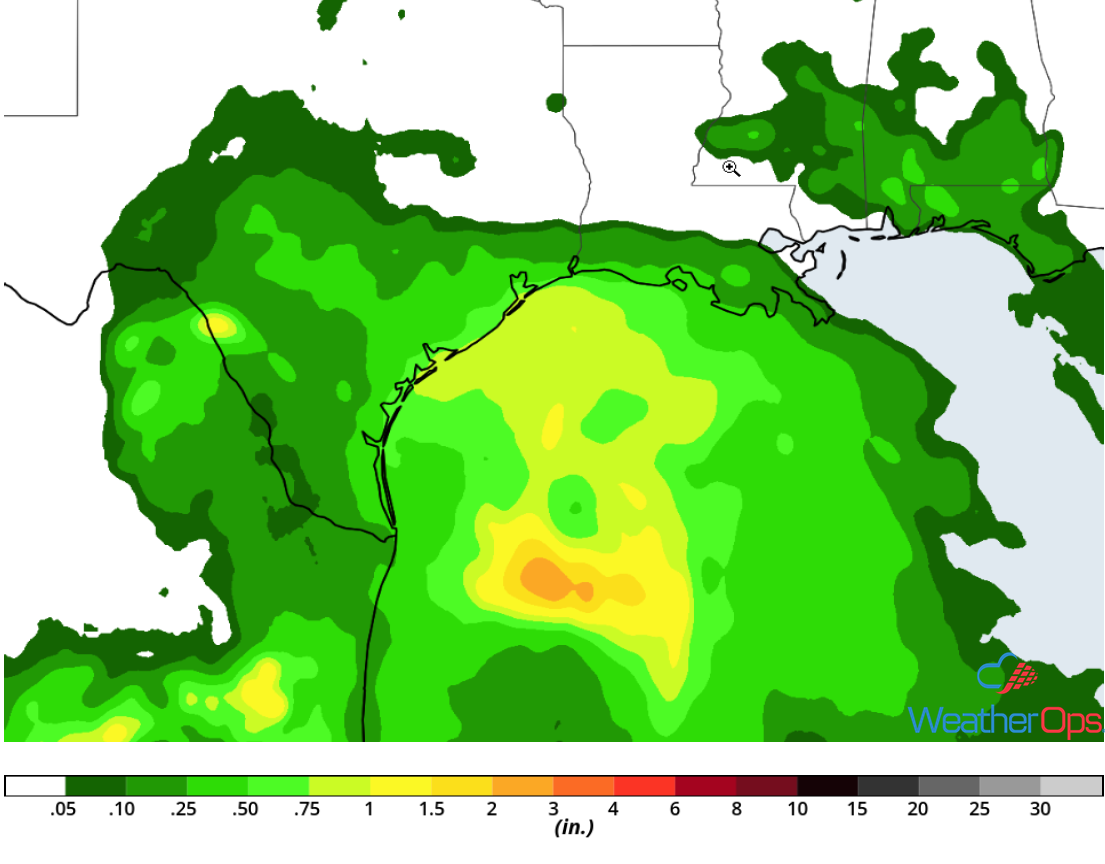 Tropical Update
Hurricane Florence (green oval) is 905 miles east-southeast of Cape Fear, North Carolina and is moving west-northwestward at 16 mph. A west-northwestward to northwestward motion with an increase in forward speed is expected over the next couple of days. On the current forecast track, the center of Florence will move over the southwestern Atlantic between Bermuda and the Bahamas through Wednesday.  Maximum sustained winds are at 130 mph.  Florence is expected to strengthen slowly over the next day or two. While some weakening is expected on Thursday, Florence is still expected to remain a major hurricane through landfall.

Hurricane Helene (blue oval) is 670 miles west of the Cabo Verde Islands and moving westward at 12 mph. This motion is expected to continue through today with a turn toward the north-northwest and north thereafter. Gradual weakening is expected to begin tonight and Helene should become a tropical storm on Thursday.

A large area of disturbed weather over the extreme northwestern Caribbean Sea and the southeastern Gulf of Mexico (orange oval) is associated with an area of low pressure interacting with an upper level trough. Although there are signs of organization, there is not a surface circulation. Little development is anticipated today, but upper level winds are forecast to become more favorable and a tropical depression could develop Thursday or Friday while the disturbance moves across the western Gulf of Mexico. Regardless of development, heavy rainfall and gusty winds are likely across western Cuba and the Yucatan Peninsuia today.

A Look Ahead
Excessive rainfall will continue from Friday through Monday across the Carolinas in association with Florence. Four day rainfall totals of 16-20 inches with locally higher amounts in excess of 24 inches are expected, leading to catastrophic flooding. Elsewhere, heavy rain will continue across southern Texas Friday through the weekend. Thunderstorms may develop across the Northern Plains and Upper Midwest on Monday ahead of a cold front.