Potential Tropical Cyclone Three Approaching the North Central Gulf Coast on Tuesday
Potential Tropical Cyclone Three is continuing to move northwestward through the Gulf of Mexico. It will have a potential to spread low-end tropical storm force winds and heavy rainfall into the region. The strongest conditions will likely occur on Thursday. Storm surge of 1-3 feet and rainfall totals of 3-6 inches with locally higher amounts in excess of 8 inches are expected. There will also be a low tornado threat. 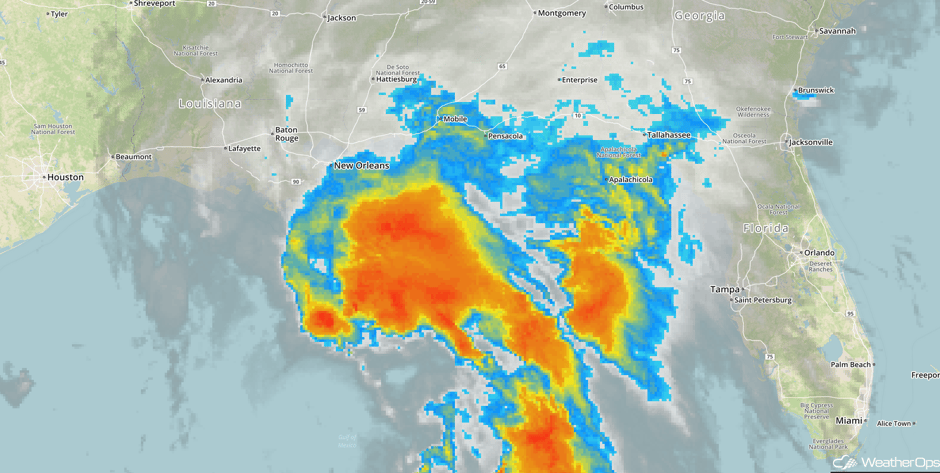 Elevated Conditions Expected for Portions of the Gulf of Mexico through Thursday
Potential Tropical Cyclone Three will spread a large area of near gale to gale force winds across much of Region 4 with gusts in excess of 40 knots. In addition, seas of 8-13 feet are expected Tuesday and into Wednesday before decreasing on Thursday. A few waterspouts can be expected as well.

Strong to Severe Thunderstorms Possible Wednesday for the Central Plains and Upper Midwest
Instability is expected to increase across the Central Plains on Wednesday. This will be a result of cooler air aloft, daytime heating, and plentiful moisture at the surface. A cold front should move into the region from the west in the afternoon hours and, and push eastward overnight. Storms should begin to develop along and ahead of the front during the afternoon. Some storms may be isolated, allowing them to become supercells. Large hail, damaging winds, and isolated tornadoes will all be potential hazards with these storms. The threat will spread eastward overnight into the Upper Mississippi Valley as the front moves eastward. 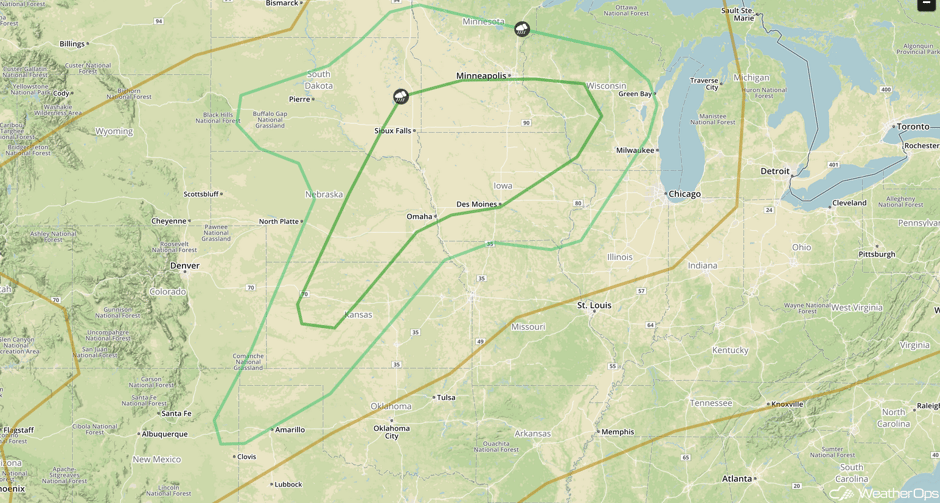 Risk for Excessive Rainfall from the Upper Mississippi Valley to Great Lakes on Wednesday
The area of low pressure over the Gulf of Mexico will continue to spread heavy rain over the northern Gulf Coast on Wednesday. Rainfall amounts could range 3-6 inches from Wednesday into Thursday morning, with locally heavier amounts in excess of 7 inches. Given the rain falling today, flooding is likely near the coast and just inland. 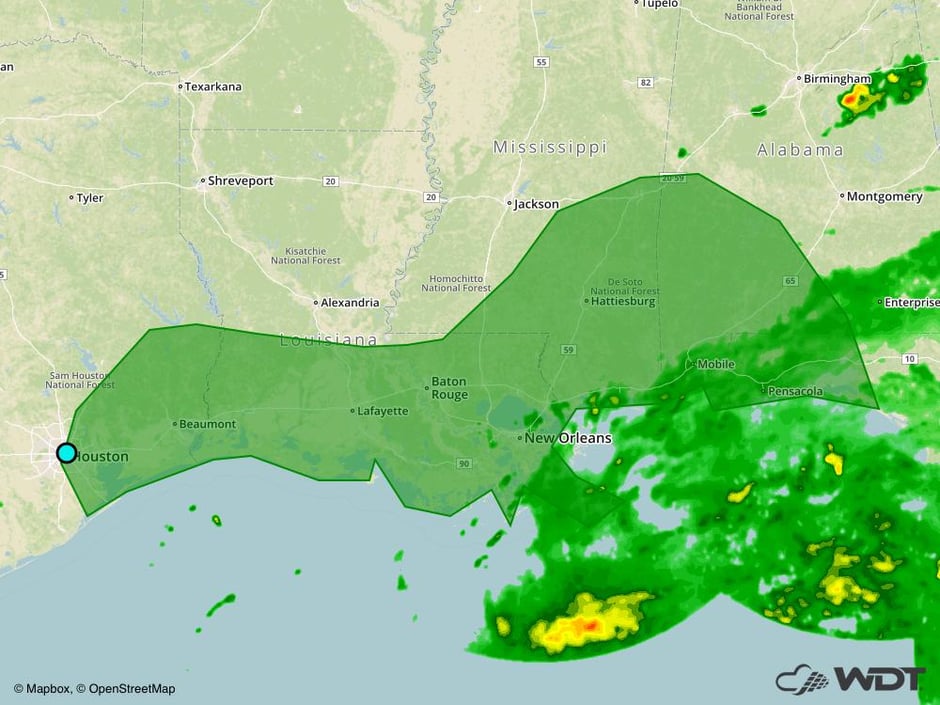 Risk for Excessive Rainfall from the Upper Mississippi Valley to Great Lakes on Thursday
Severe weather that developed in the Northern Plains on Wednesday ahead of a cold front will be moving into the Great Lakes Thursday. Showers and thunderstorms are expected along the front. Several areas could get repeated rounds of rainfall, resulting in rainfall amounts of 1-3 inches with locally heavier amounts in excess of 4 inches. 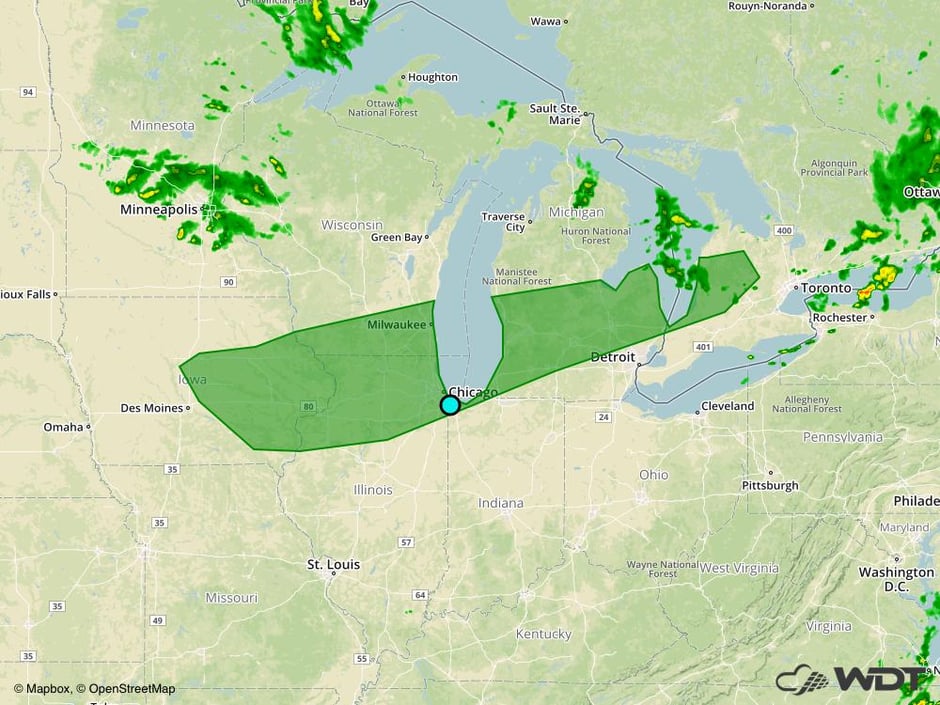 Excessive Rainfall Thursday for the Gulf Coast
Further to the south of the low over the Gulf that has been bringing heavy rain to the central Gulf states may be on a path that will bring it inland over the southeastern Texas coast on Thursday. Although details are highly uncertain, this system may bring tropical storm force winds ashore. Elevated surf can be expected along coastal areas, along with heavy to torrential rainfall. Low-end tropical storm force winds and coastal flooding will be possible along portions of the Gulf Coast, mainly for southeast Texas and southern Louisiana. Heavy rainfall and inland flooding may also occur from the western Florida Panhandle to southeast Texas, with storm total rainfall amounts of 4-8 inches, locally 14+, possible for many locations in these regions. All residents in the region should pay close attention to the path of this low and follow the latest forecasts to get the most accurate information possible on expected rainfall amounts. 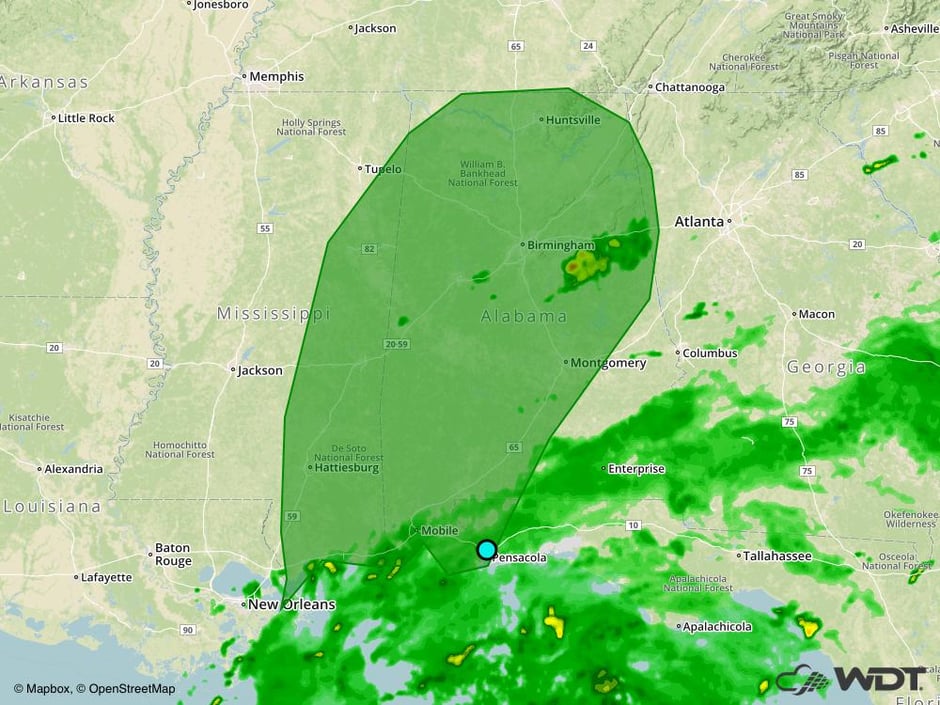 Tropical Update
Tropical Storm Bret (green oval) is located 315 miles east of Curacao and is moving west-northwestward at 21 mph. Maximum sustained winds are at 45 mph. Bret will continue to move across the southeastern Caribbean Sea before dissipating on Thursday.

Potential Tropical Cyclone Three (red oval) is currently 355 miles southeast of Galveston, TX with sustained winds at 40 mph and higher gusts. Movement is toward the northwest at 17 mph and this motion is expected to continue through Wednesday night. It is expected to be near the Louisiana coast Wednesday night and inland over eastern Texas and western Louisiana on Thursday.

A Look Ahead
A cold front moving through the Northeast Friday may allow for a few isolated showers and thunderstorms, but no severe weather is expected. The low moving inland from the Gulf of Mexico should continue to bring heavy rainfall to the Arklatex region on Friday, but the system should be weakening rapidly. By Saturday, rain will move into the Lower Mississippi Valley. Across the Northern Plains, showers and thunderstorms may develop on Saturday. As a cold front moves across the Plains on Sunday, thunderstorms may develop across the Central Plains. On Monday, rain will extend from central Texas to the northeast ahead of the front.