Severe thunderstorms and excessive rainfall are expected Tuesday across the Northern Plains and Upper Midwest as an upper level disturbance moves across the region. A front across the Great Lakes and Northeast will be the focus for thunderstorm development on Tuesday.

Severe Thunderstorms Expected across the Northern Plains into the Northeast on Tuesday
Isolated thunderstorms are expected during the morning hours. While these storms will mainly be below severe limits, the stronger storms may produce gusty winds and hail. These storms are forecast to weaken by the late morning or early afternoon. Daytime heating and plentiful moisture across the region will destabilize the atmosphere, allowing for the redevelopment of thunderstorms. An area of low pressure will move into the region, allowing for stronger storms during the afternoon. These storms will rapidly intensify, producing large hail, damaging winds, and tornadoes. A transition to more of a damaging wind threat will occur after sunset and push east way. Further east, storms will weaken after sunset.

Risk for Thunderstorms Tuesday across Portions of the High Plains
Isolated thunderstorms may develop across the region today. Strong mid level winds and favorable wind shear will create a favorable environment for the development of strong to severe thunderstorms. Gusty winds and hail will be the primary hazards.

Thunderstorms for Northern Maine on Tuesday
A cold front moving out of Canada and into northern New England will promote isolated thunderstorm development, primarily during the evening. Favorable wind shear may allow for the development of a few strong to severe thunderstorms capable of gusty winds and hail.

Major Cities in Region: Caribou, ME 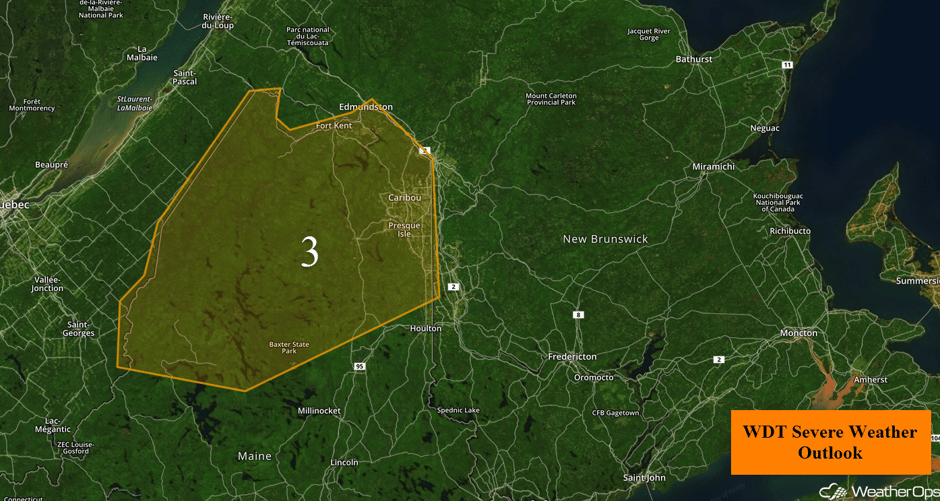 Potential for Thunderstorms across the Great Lakes and High Plains on Wednesday
By Wednesday, the eastward moving upper level disturbance and associated surface low will bring the threat for strong to severe thunderstorms across portions of the Great Lakes. Southerly flow just ahead of the low will bring ample moisture into the region; combined with daytime heating, instability will build. In addition, modest wind shear will allow for the development of clusters of thunderstorms. Some of these storms are forecast to be strong to severe with large hail and damaging winds being the primary hazards, but an isolated tornado or two cannot be ruled out.

Further west across the Central and High Plains, a cold front will be the focus for showers and thunderstorms during the afternoon. While instability and shear will be weaker, upslope flow will allow for the development of thunderstorms capable of producing hail and damaging winds.

Strong to Severe Thunderstorms Thursday from the Central Plains into the Northeast
Strong to severe thunderstorms may develop along a stalled boundary from the High Plains into the Northeast. To the south of this front, southerly flow will pump warm moist air northward across the region. During the early morning hours, rain and thunderstorms will be ongoing. However, activity will increase in coverage and intensity during the afternoon as instability builds. Some storms will become strong to severe with hail and damaging winds the primary hazards.

A Look Ahead
Scattered showers and thunderstorms may develop Friday from the Midwest eastward into the Northeast along a stalled frontal boundary. This front will slowly track southward on Saturday, bringing a chance for showers and thunderstorms from the Tennessee Valley to the Mid Atlantic. The remnants of Tropical Depression Four will enter the Gulf of Mexico on Saturday, bringing a chance of showers to the eastern Gulf States. This activity will continue into Sunday.