Tropical storm conditions and continued widespread, devastating flooding is expected from east Texas to the Central Gulf Coast on Tuesday. Excessive rainfall is expected along the coastal areas of North Carolina as Potential Tropical Cyclone Ten continues to move northward. 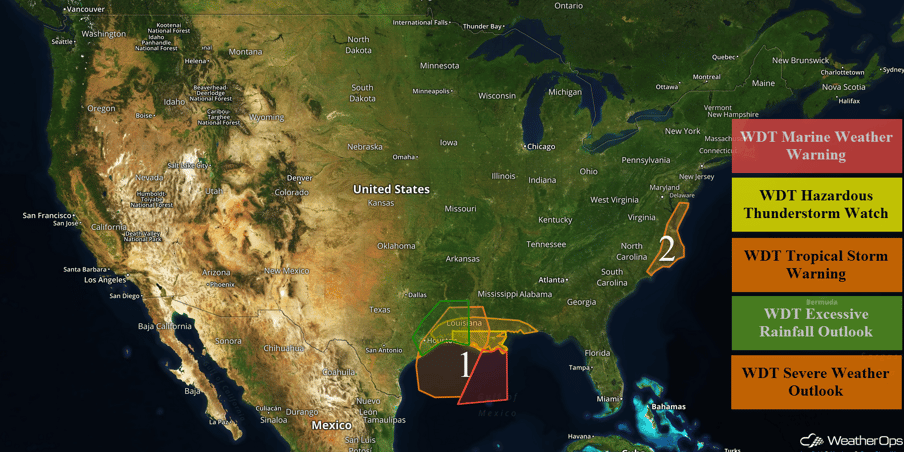 Strong feeder bands associated with Tropical Storm Harvey continue to move northward into coastal Louisiana and Mississippi. This thunderstorm activity will continue through the early evening. With instability and wind shear present east and northeast of Harvey's center, there will be a risk for isolated waterspouts and tornadoes. Heavy rain is expected to continue across the region with an additional 10-15 inches of rain across portions of eastern Texas. Rain may not begin to move out of eastern Texas until Wednesday evening. Across western Louisiana, rainfall accumulations of 6-12 inches are expected with locally higher amounts. Heavy rainfall will continue across Louisiana through Thursday evening. 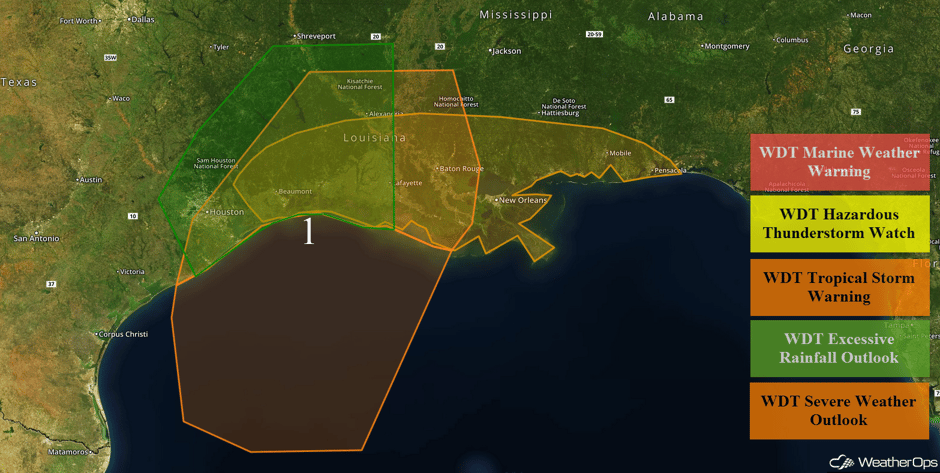 Excessive Rainfall and Tropical Storm Conditions Tuesday for the Coastal Areas of North Carolina to Southern Delaware
Potential Tropical Cyclone Ten is forecast to accelerate to the northeast over the next few days with the potential for the system to become a tropical storm. Tropical storm like conditions are forecast into the overnight hours on Tuesday and the early morning hours on Wednesday. Winds will be 35-40 mph with gusts in excess of 50 mph. Rainfall amounts of 5-7 inches with locally heavier amounts in excess of 9 inches are forecast. This heavy rainfall will lead to flooding and flash flooding. 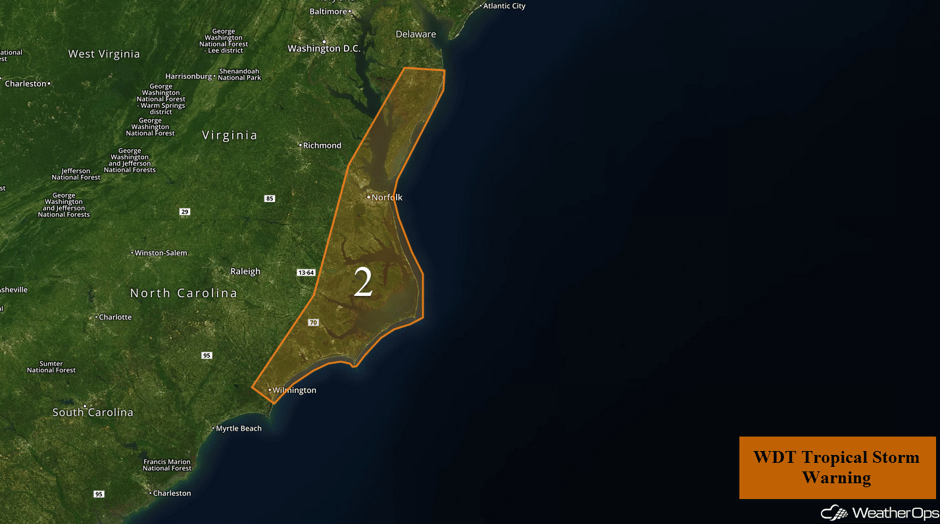 Excessive Rainfall from East Texas into the Mississippi Valley Wednesday and Thursday
As the center of Tropical Storm Harvey moves northward into east Texas and western Louisiana, copious rainfall will continue throughout much of eastern Texas and the Mississippi Valley. Two day rainfall totals may exceed two feet of rain in some areas. Isolated flooding will be an issue for portions of Mississippi, Alabama, and the Florida Panhandle. Additionally, a few tornadoes cannot be ruled out east and northeast of the center of Harvey. 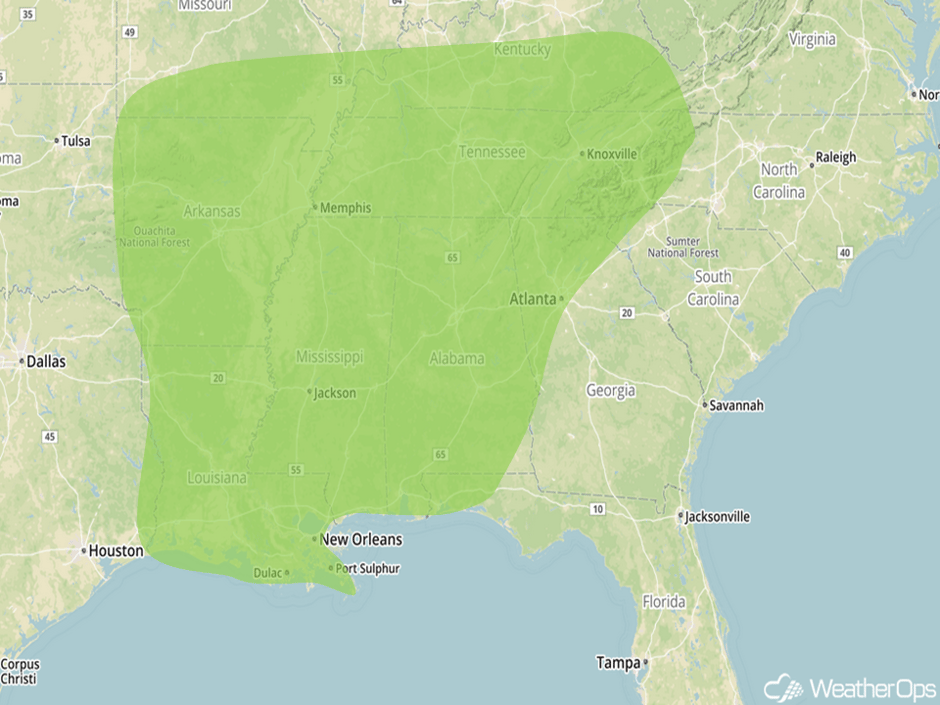 Thunderstorms Thursday across the Western High Plains
A developing area of low pressure in the lee of the Rockies and daytime heating may allow for the development of thunderstorms during the afternoon and early evening. Strong wind gusts and large hail will be the primary hazards with these storms. 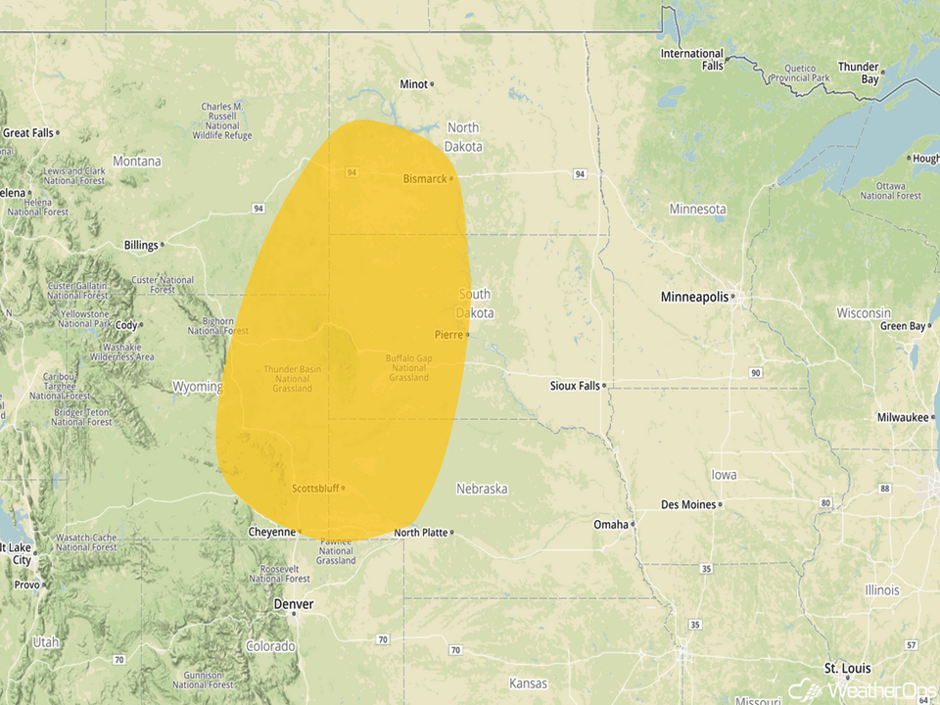 Tropical Update
The center of Tropical Storm Harvey (green oval) is moving toward the north-northeast at 5 mph. This track is forecast to continue today and tomorrow. On the forecast track, the center of Harvey is expected to be just offshore of the middle and upper Texas coasts through tonight before moving inland over the northwestern Gulf coast early Wednesday. Maximum sustained winds remain near 45 mph with higher gusts. No significant change in strength is expected before the center moves inland. A gradual weakening should begin thereafter.

Potential Tropical Cyclone Ten (red oval) is currently located 30 miles south-southeast of Jacksonville, North Carolina and is moving toward the northeast at 17 mph. It is expected to accelerate toward the northeast and east-northeast during the next couple of days. This disturbance is forecast to move near the coast of North Carolina today and then move away from the coast tonight. Maximum sustained winds are near 40 mph with higher gusts. Little change in strength is forecast today and the potential for the system to become a tropical cyclone will decrease. Regardless of whether or not this system becomes a tropical cyclone, tropical storm force winds and heavy rain are expected over portions of North Carolina today. The disturbance is forecast to strengthen at sea and become an extratropical low over the northwestern Atlantic by Wednesday evening.

Showers and thunderstorms associated with an area of low pressure near the Cabo Verde Islands (blue oval) have become better organized since yesterday. Environmental conditions are conducive for development, and a tropical depression could develop in 2-3 days over the eastern Atlantic. The system is forecast to move generally west-northwest at 15-20 mph over the tropical Atlantic over the next several days. Heavy rain is possible over portions of the Cabo Verde Islands through Wednesday.

A Look Ahead
By Friday, the remnants of Harvey will spread into the Ohio Valley with heavy rainfall extending from Pittsburgh and Cincinnati southwestward to the Central Gulf Coast. Widespread rainfall amounts of 2-4 inches with locally higher amounts in excess of 6 inches are forecast, especially across Kentucky and southern portions of Illinois, Indiana, and Ohio. Across the Northern Plains, a few strong to severe thunderstorms may develop across the Dakotas and Minnesota. Gusty winds and large hail will be the primary hazards.

Into Saturday, heavy rainfall will spread into the Northeast and Mid Atlantic. Rainfall amounts of 1-3 inches with locally higher amounts in excess of 4 inches are forecast. A few thunderstorms may develop across Minnesota into the Great Lakes with gusty winds and large hail the primary hazards with these storms.