Thunderstorms from the Northeast to the Southern Plains Tuesday
A cold front currently stretching southwestward from Quebec to the Missouri River Valley will continue to track east to southeastward throughout the day on Tuesday. Ongoing early morning thunderstorm activity will continue to track east to southeastward just ahead of the front. With ample low level moisture ahead of the front, combined with daytime heating, modest to strong instability will begin to build ahead of the front from portions of the Northeast to the Southern Plains. This instability, combined with increasing wind shear and lift from the cold front, will allow for further strengthening of this morning's thunderstorm activity. Additional thunderstorm activity is forecast this afternoon with some of these storms becoming strong to severe in nature. Damaging winds will be the primary hazard with these storms, however, a few tornadoes and isolated instances of hail cannot be ruled out especially across upstate New York. 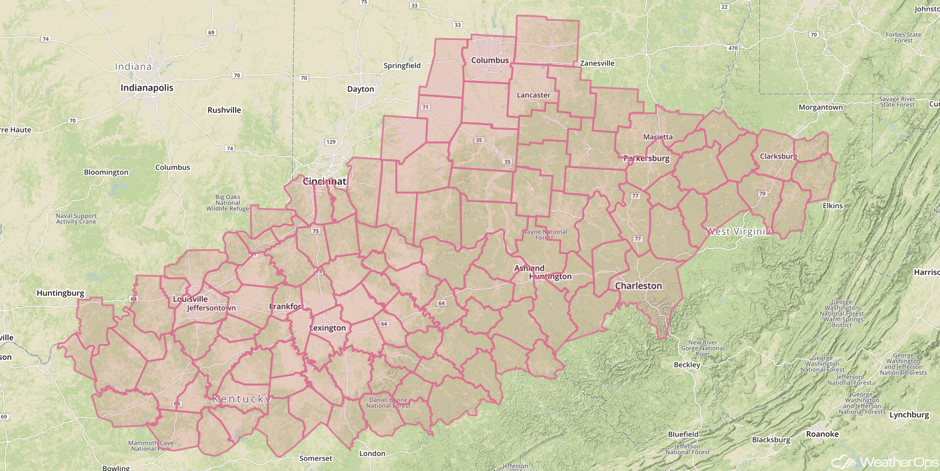 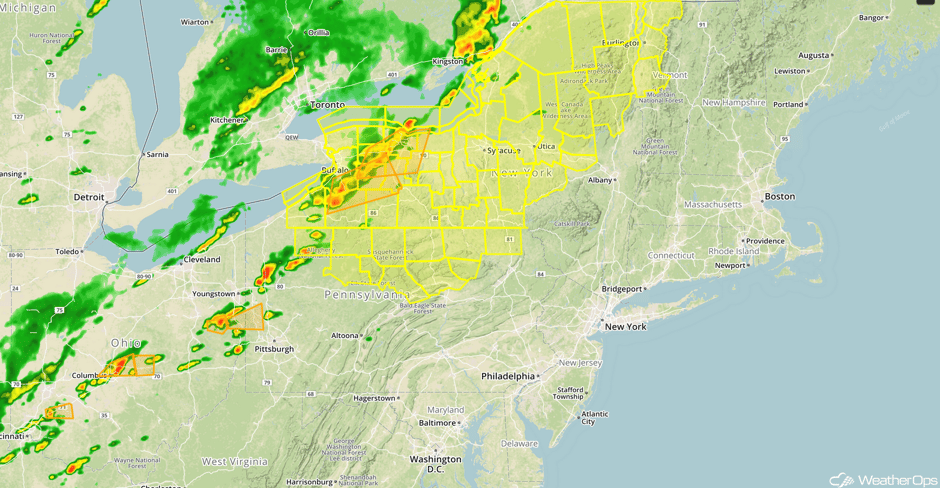 Thunderstorm Potential Wednesday for the Southern Mid-Atlantic
As a cold front approaches the East Coast, a few strong to severe thunderstorms may develop across the southern Mid Atlantic during the afternoon on Wednesday. Damaging winds will be the primary hazard with these storms through the evening before moving off the coast. In addition, heavy rainfall amounts of 1-1.5 inches are expected.

Excessive Rainfall for the El Paso Region on Wednesday
Monsoonal moisture should produce shower and thunderstorm chances on Wednesday with a potential for locally heavy rainfall. Rainfall amounts of 1-1.5 inches are expected. 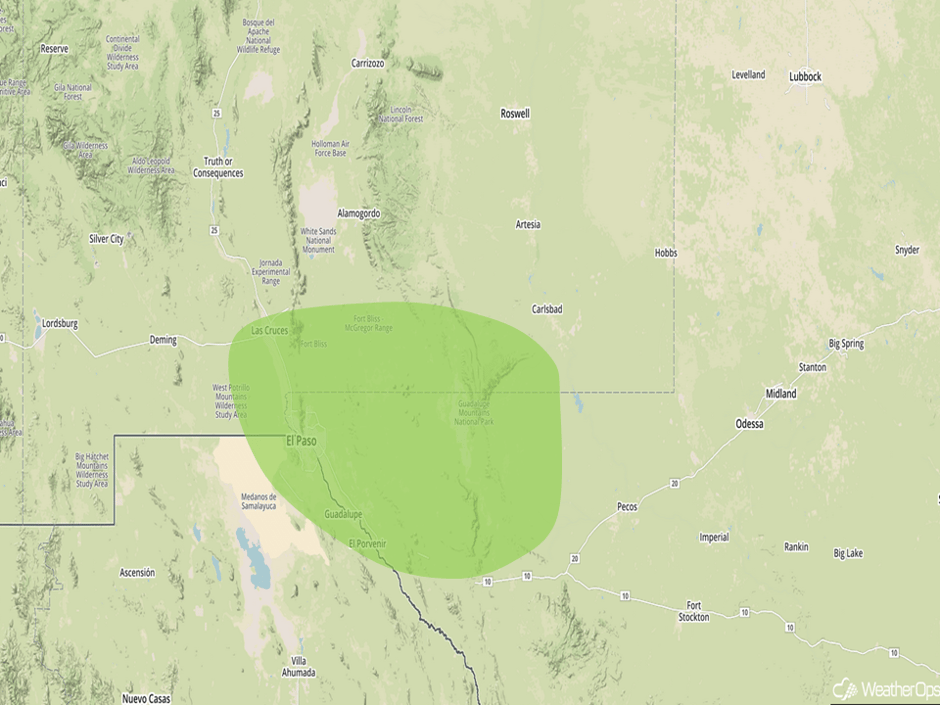 Potential for Thunderstorms Thursday for the North Central High Plains
An area of low pressure and stalled front should be sufficient for the development of strong to severe thunderstorms on Thursday. While storms should be isolated to scattered, gusty winds and hail will be the primary hazards with these storms. 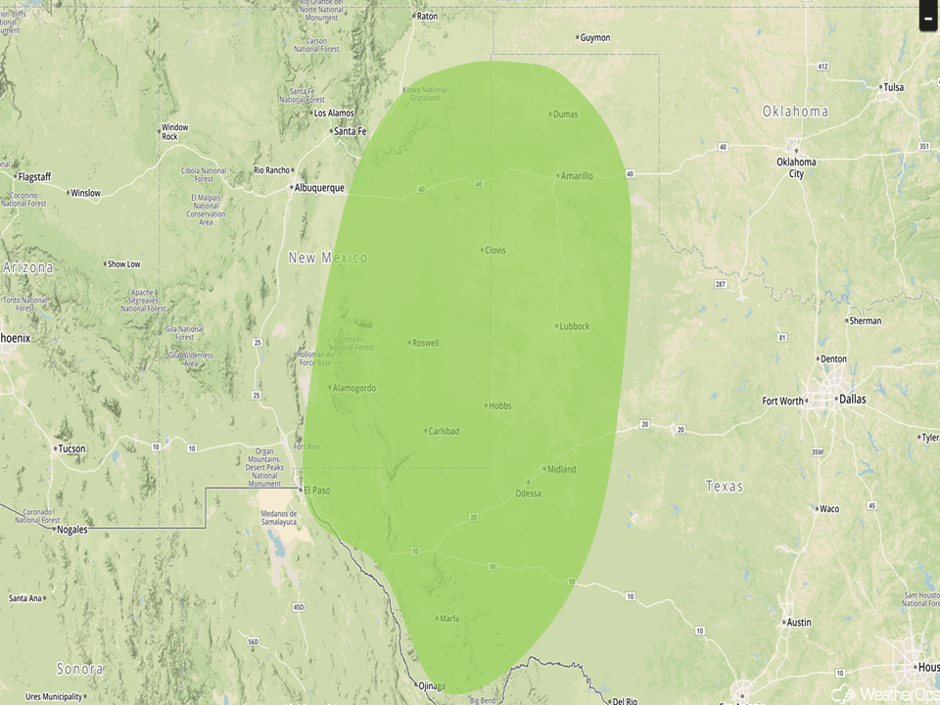 Excessive Rainfall Thursday for the Corpus Christi Region
A tropical system is forecast to begin approaching the Texas coastline on Thursday. The current track for this system, the remnants of what was Tropical Storm Harvey will re-strengthen into a tropical storm or possibly even a hurricane before making landfall near Corpus Christi. This would bring heavy rainfall for the region late Thursday with some moderate to heavy rainfall totals exceeding 1.50 inches. 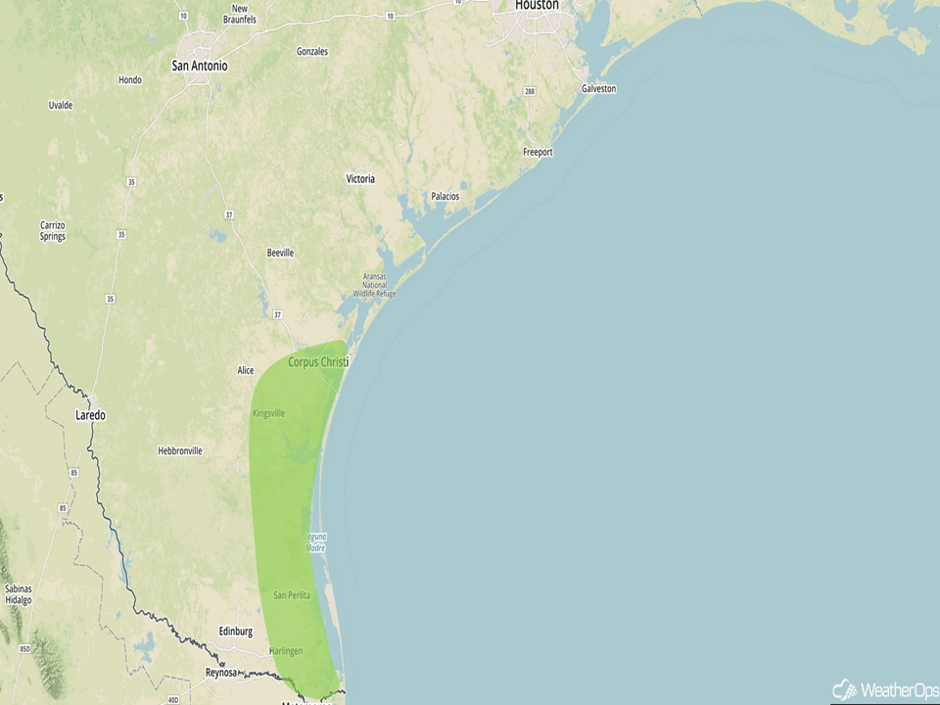 Tropical Update
Disorganized showers and thunderstorms over the Yucatan Peninsula and adjacent waters are associated with the remnants of Tropical Storm Harvey (green oval). Environmental conditions are expected to be conducive for development as the system moves across the Bay of Campeche tonight. A tropical depression is expected to develop over the southwestern Gulf of Mexico Wednesday or Thursday. Regardless of development, locally heavy rainfall and gusty winds are expected to spread westward across Belize and the Yucatan Peninsula during the next day or so.

Shower and thunderstorm activity associated with a broad trough of low pressure (blue oval) near the northwestern Bahamas remains limited. Any development of this system during the next few days should be slow to occur while it moves west-northwestward, and then turns northwestward or northward near Florida. Environmental conditions could become more conducive for development by the weekend as the system moves over the western Atlantic.

A Look Ahead
The remnants of tropical storm Harvey, currently a tropical wave moving across the Yucatan Peninsula, are forecast to re-strengthen in the Bay of Campeche and lift into the Gulf of Mexico late this week through the weekend. Per the WDT forecast track, Harvey will likely reach strong tropical storm status or possibly even hurricane status by Friday before making landfall near Corpus Christi. The system will then linger around the Texas coastline and move slowly eastward through the weekend and into next week. Precipitation totals through Monday are forecast to range between 4-8 inches, with localized amounts exceeding 10 inches possible.