Snow through Saturday for the Rockies
Significant snowfall is forecast over the next several days across the higher elevations of the Rockies. Snowfall totals will range 9-12 inches with locally higher amounts in excess of 18 inches. In addition, gusty winds in excess of 35 mph may produce blowing snow and reduced visibility. Some roads may become impassable, so use extreme caution if travel is necessary.

Continued Snow for the Sierra Nevadas Thursday
Snow will continue across the Sierra Nevadas through Thursday evening as an area of low pressure moves through the region. Snowfall totals will range 4-8 inches with locally higher amounts in excess of 10 inches for the lower elevations. In the higher elevations, 1-3 feet of snow is expected. Winds gusting in excess of 40 mph in the lower elevations and 60 mph in the higher elevations will cause blowing snow, limiting visibilities to less than a mile at times.

Thunderstorms Thursday for Central California
Thunderstorms may develop across central California as the area of low pressure described above continues to track eastward. Weak instability and terrain will allow for the development of thunderstorms, some of which may be supercells capable of producing weak tornadoes. 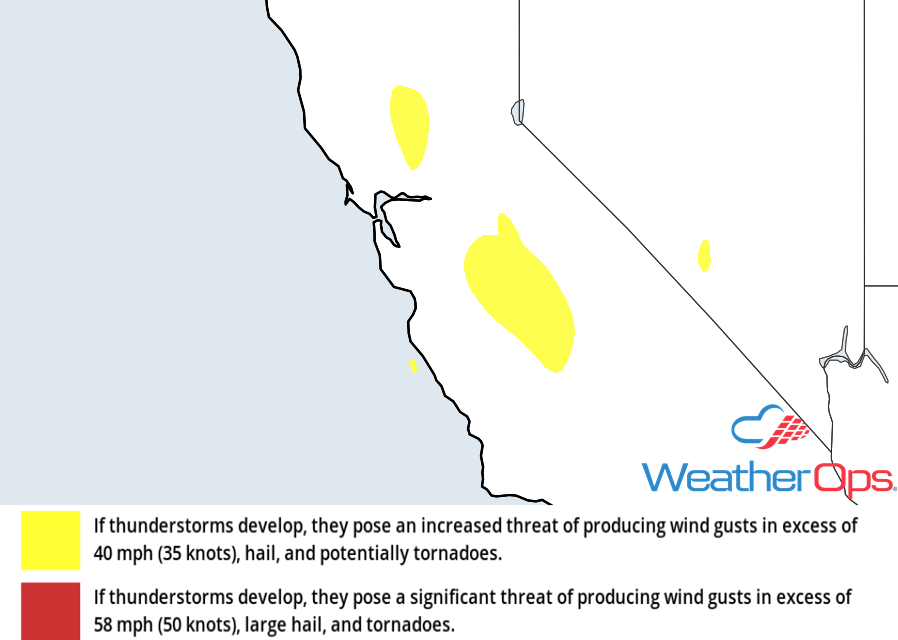 Excessive Rainfall for California on Thursday
The area of low pressure moving across California will continue to bring heavy to excessive rainfall to the state. Rainfall totals will range 1-2 inches with locally higher amounts in excess of 3 inches. Given recent rainfall, there will be a potential for flash flooding and mudslides, especially in the higher elevations and areas recently affected by wildfires.

Snow Friday through Sunday from the North Central Plains through the Great Lakes
A powerful winter storm is expected to develop and make its way across the Central US beginning Friday, bringing the chance for significant snowfall and gusty winds. Accumulations could exceed a foot across portions of Nebraska and South Dakota through Sunday. Combined with winds in excess of 30 mph, blowing snow could reduce visibility and result in large snow drifts. In addition, there may be some freezing rain; accumulations may exceed 0.10 inch across Nebraska and Iowa. 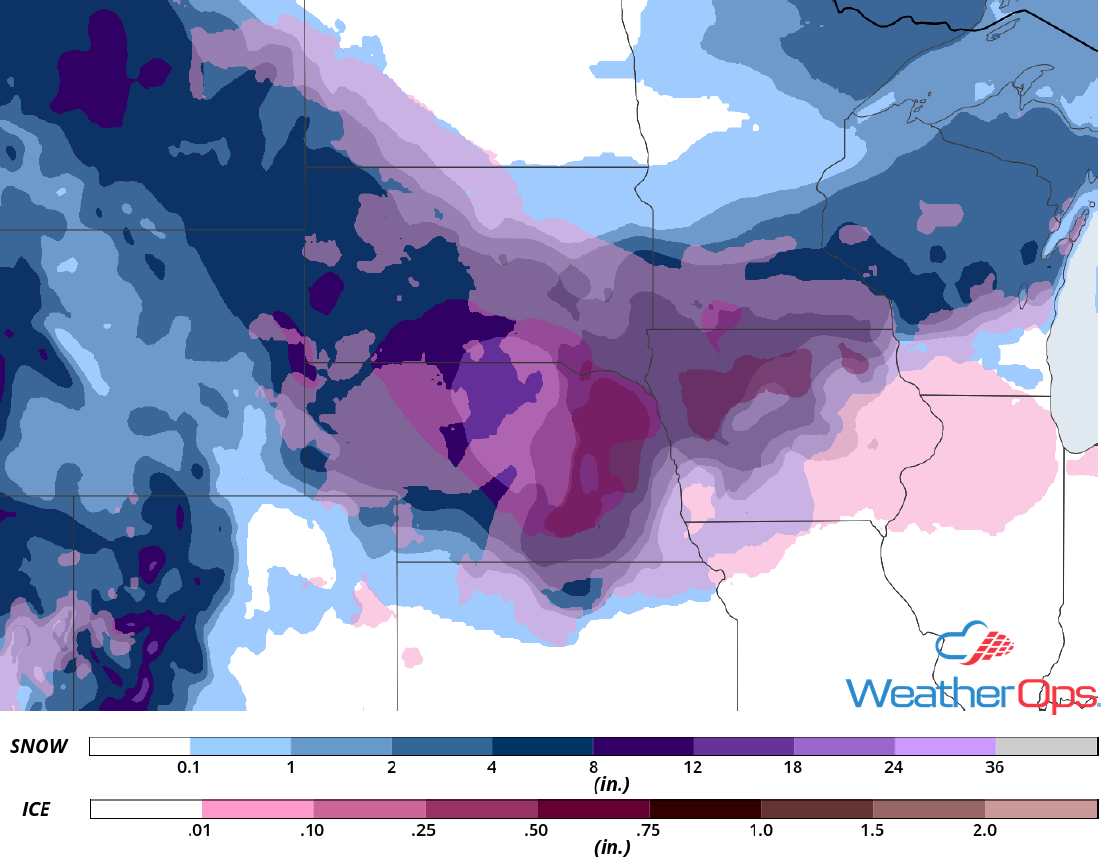 Thunderstorms from the Southern Plains through the Lower Mississippi Valley Friday
An upper level disturbance currently located over California will move eastward, allowing a strong area of low pressure to develop. Ample moisture is expected to stream northward from the Gulf of Mexico, causing instability to build. Thunderstorms are expected to develop along the frontal boundaries associated with the area of low pressure. As thunderstorms develop, large hail, damaging winds, and tornadoes will all be potential hazards from the evening into the overnight hours.

Potential for Thunderstorms Saturday from the Gulf Coast to the Ohio Valley
As the area of low pressure described above continues to move eastward, showers and thunderstorms are expected to be ongoing along and ahead of the front. Daytime heating and plentiful moisture will destabilize the atmosphere, allowing these storms to intensify as the day progresses. Further north across the Ohio Valley, scattered thunderstorms may develop along the warm front. These storms will likely be more scattered in nature with severe winds being the primary hazard, but isolated instances of large hail and a few tornadoes cannot be ruled out, especially in the evening. 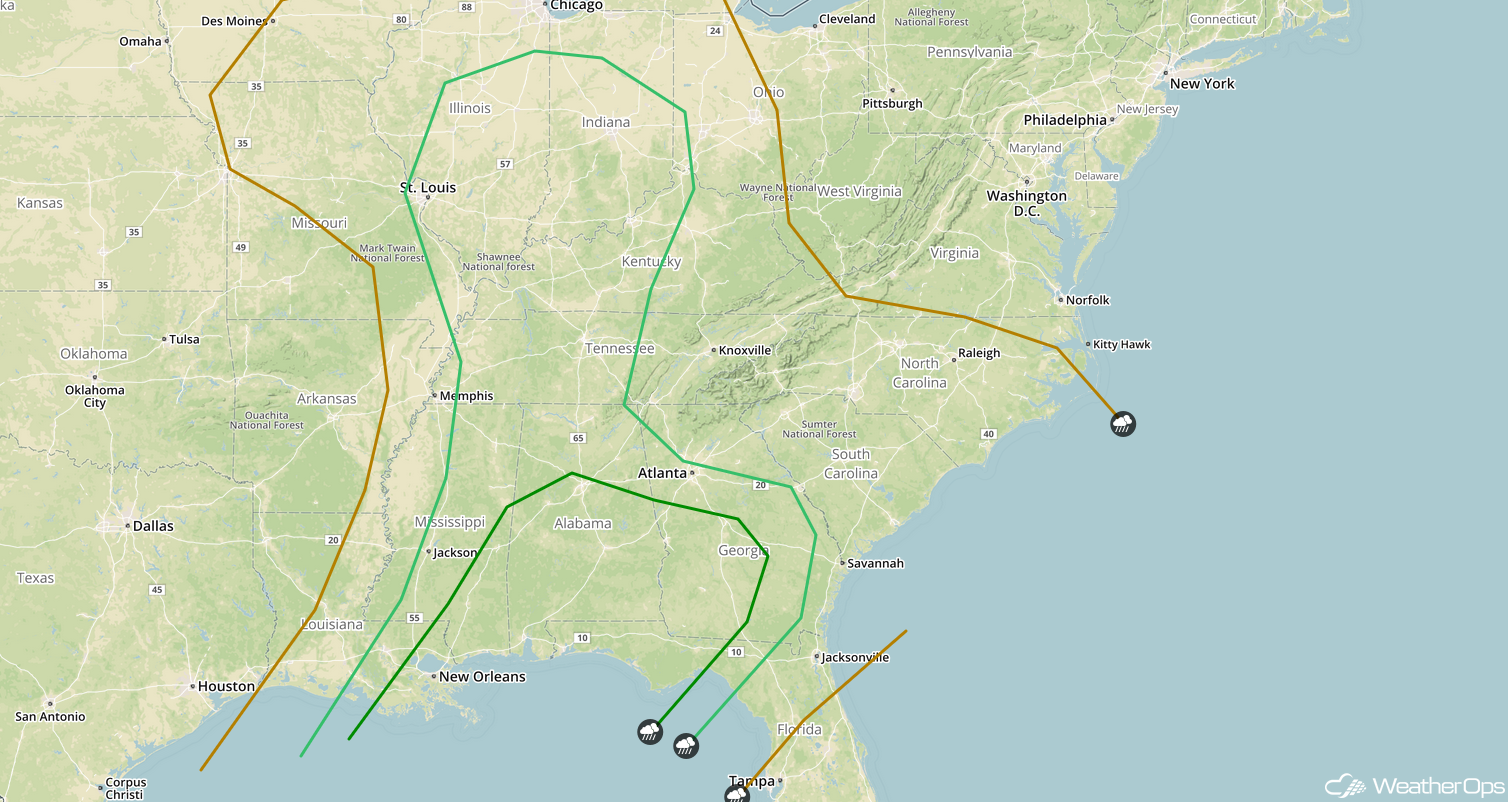 A Look Ahead
Showers and thunderstorms may develop across the Mid Atlantic and Northeast on Sunday as an area of low pressure moves eastward. Light snow may continue across portions of the Plains on Monday. Into Tuesday, light snow is forecast to develop across the Ohio Valley. Snow is forecast across portions of southern Oregon and northern California on Wednesday as a weak trough approaches.