Thunderstorms are forecast across the Southeast on Thursday ahead of a cold front. Some of this activity will have the potential to produce excessive rainfall. Showers and thunderstorms may develop across portions of New York and Pennsylvania as a cold front moves through the region. Snow is expected across portions of the Rockies as an upper level disturbance moves eastward. Elevated winds and seas will continue for the Gulf of Mexico through Friday night ahead of a cold front.

Thunderstorms across the Southeast on Thursday
A cold front that is progressing across the region is expected to continue to move eastward throughout the day. Most of the instability associated with this line is located near the coast, allowing thunderstorms to continue across Mississippi and Alabama. These storms will be capable of producing severe to damaging winds, large hail, and a few tornadoes. This line is expected to weaken by the afternoon, but a few isolated severe wind gusts may still occur across Florida and southern Georgia. 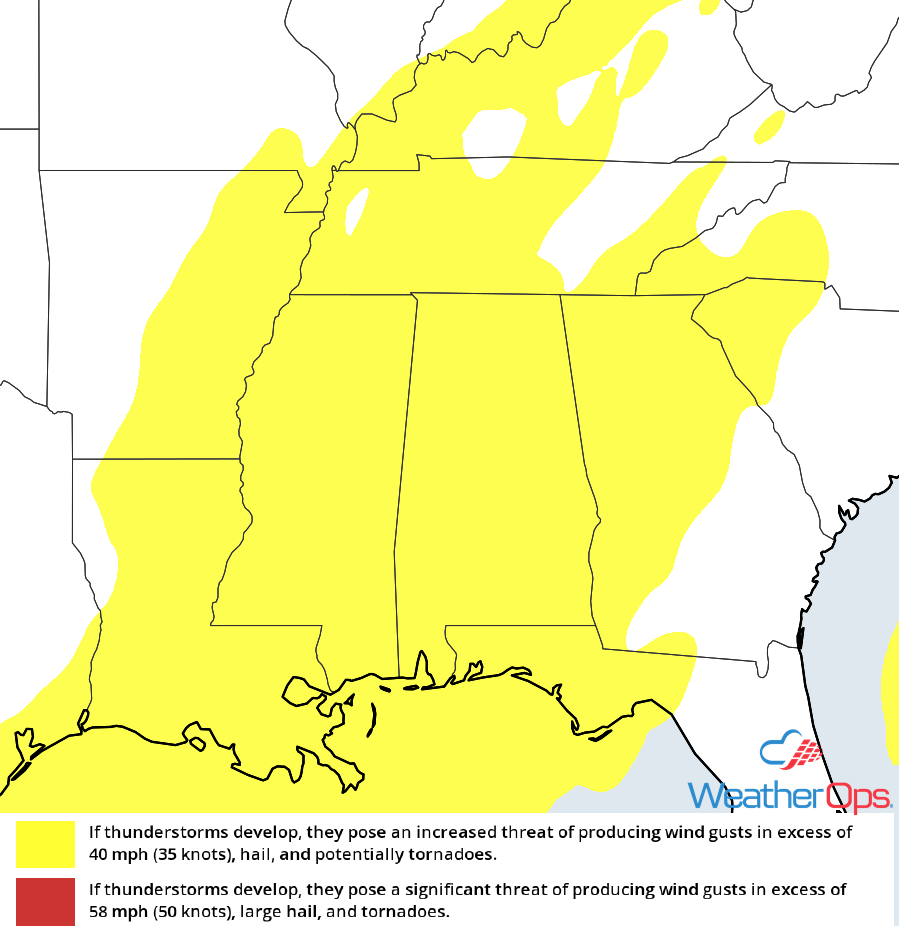 Excessive Rainfall Thursday from the Gulf Coast to the Lower Great Lakes
Ample moisture will move northward ahead of a cold front, bringing the potential for excessive rainfall to the region. Rainfall amounts will range 1-3 inches with locally higher amounts in excess of 4 inches are expected. This could lead to flash flooding, especially in areas that received heavy rain yesterday. 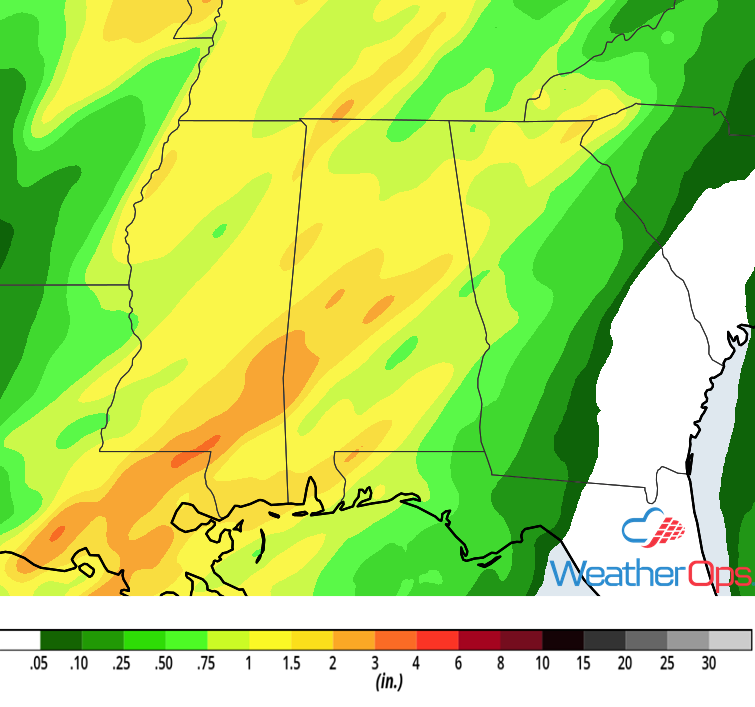 Risk for Thunderstorms across New York and Pennsylvania on Thursday
A cold front is continuing to move through the Northeast today. As daytime heating increases, instability will build. This will allow for the development of thunderstorms, some of which could become strong to severe. While instability will be somewhat weak, gusty to severe winds will be the primary hazards with these storms. Activity will weaken shortly after sunset when daytime heating is lost. 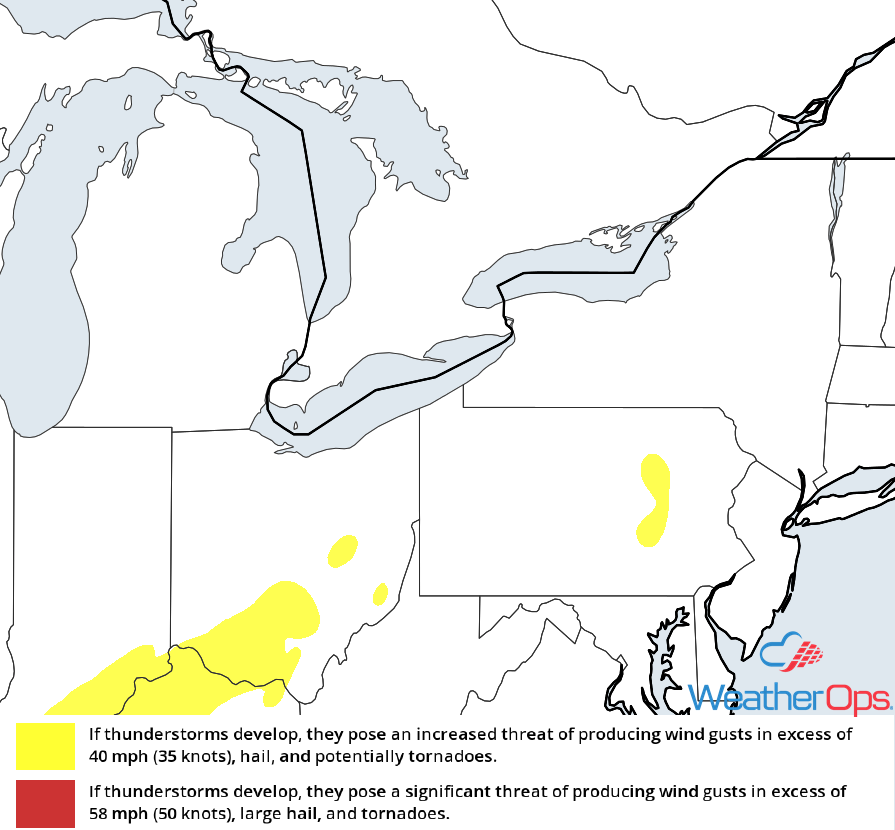 Snow through Saturday for The Rockies
An upper level disturbance will bring heavy snow to the Rockies through Friday. Widespread snowfall amounts of 2-4 inches with locally higher amounts in excess of 6 inches are forecast. In the higher elevations, snowfall totals will range 8-12 inches. Freezing rain could create a light glaze of ice, creating hazardous travel conditions in some areas. 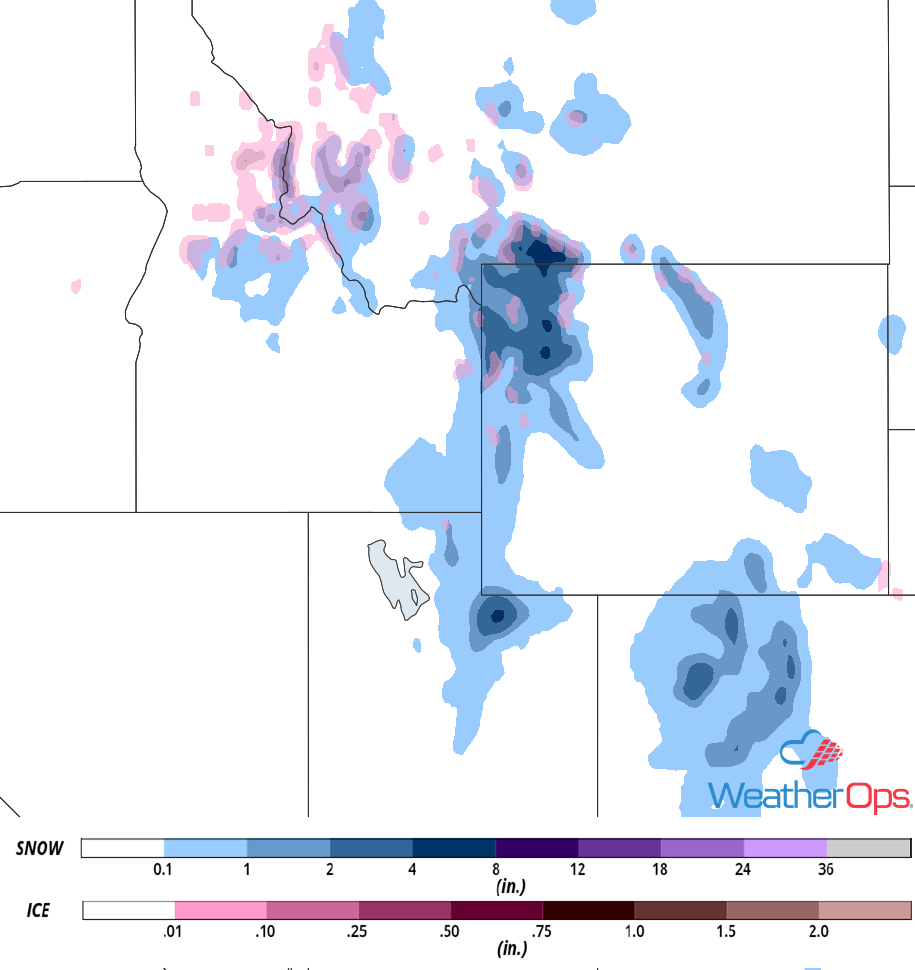 Elevated Winds and Seas for the Gulf of Mexico through Friday Night
Elevated winds and seas will continue through Friday evening as a cold front continues to move eastward. Winds will be northwesterly to northerly at 25-35 knots with gusts in excess of 40 knots. Seas will range 7-10 feet. In addition, strong to severe thunderstorms will continue along and ahead of the front. Winds in excess of 50 knots, heavy rain, frequent lightning, and waterspouts will all be potential hazards with these storms. 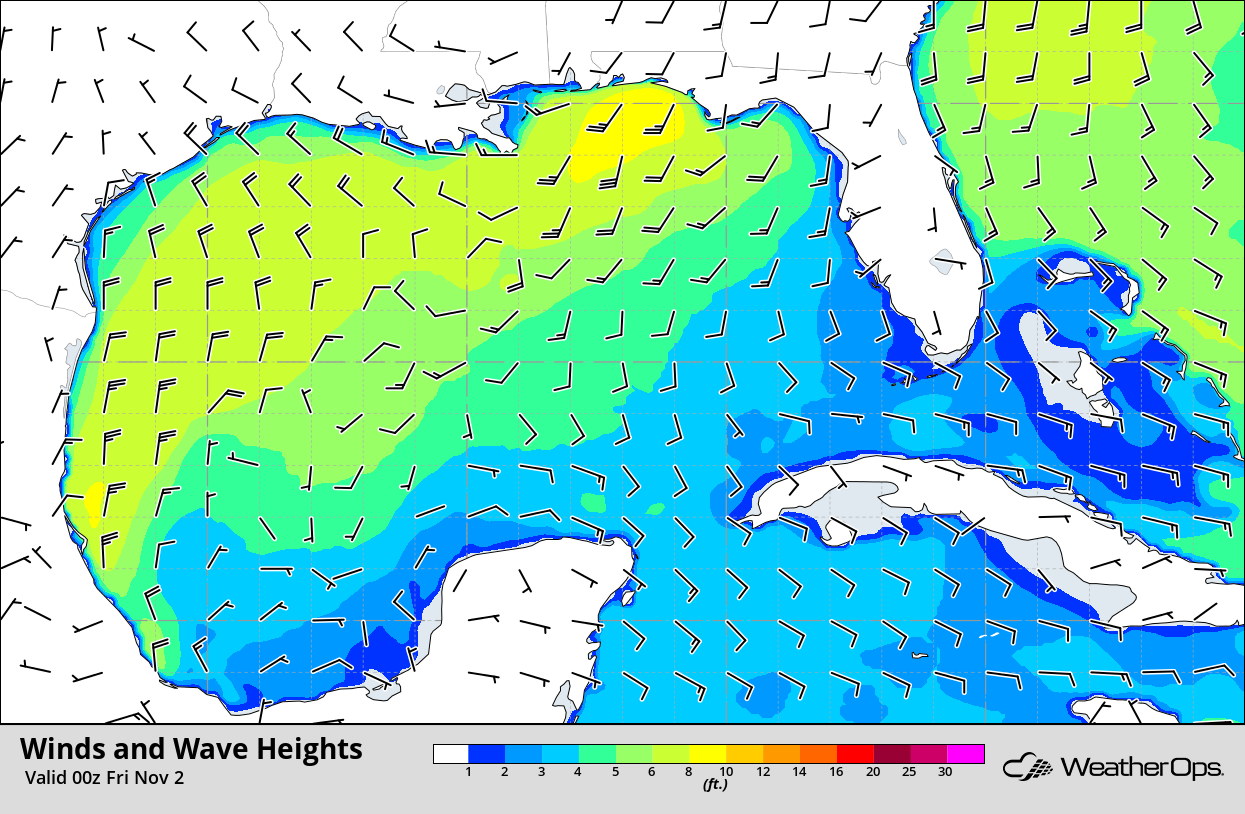 Thunderstorms for the East Coast on Friday
The cold front progressing across the Southeast today will continue to move eastward tomorrow. Showers and thunderstorms will likely be ongoing during the morning hours. Instability should be sufficient for a low risk for severe winds, but an isolated tornado or two cannot be ruled out. The risk should end by late evening or overnight as the front moves offshore. 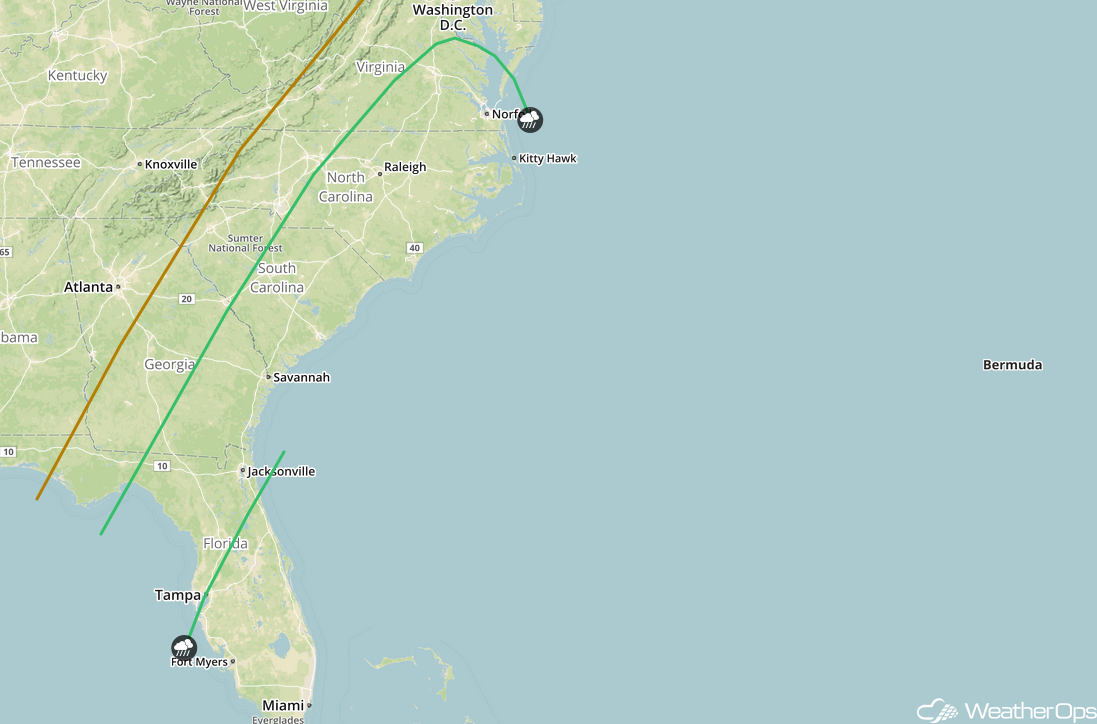 Excessive Rainfall Friday across the Northeast
As the cold front described above continues to move eastward, ample moisture will be in place for the potential for heavy rainfall. Rainfall amounts of 2-4 inches with locally higher amounts in excess of 5 inches are expected. 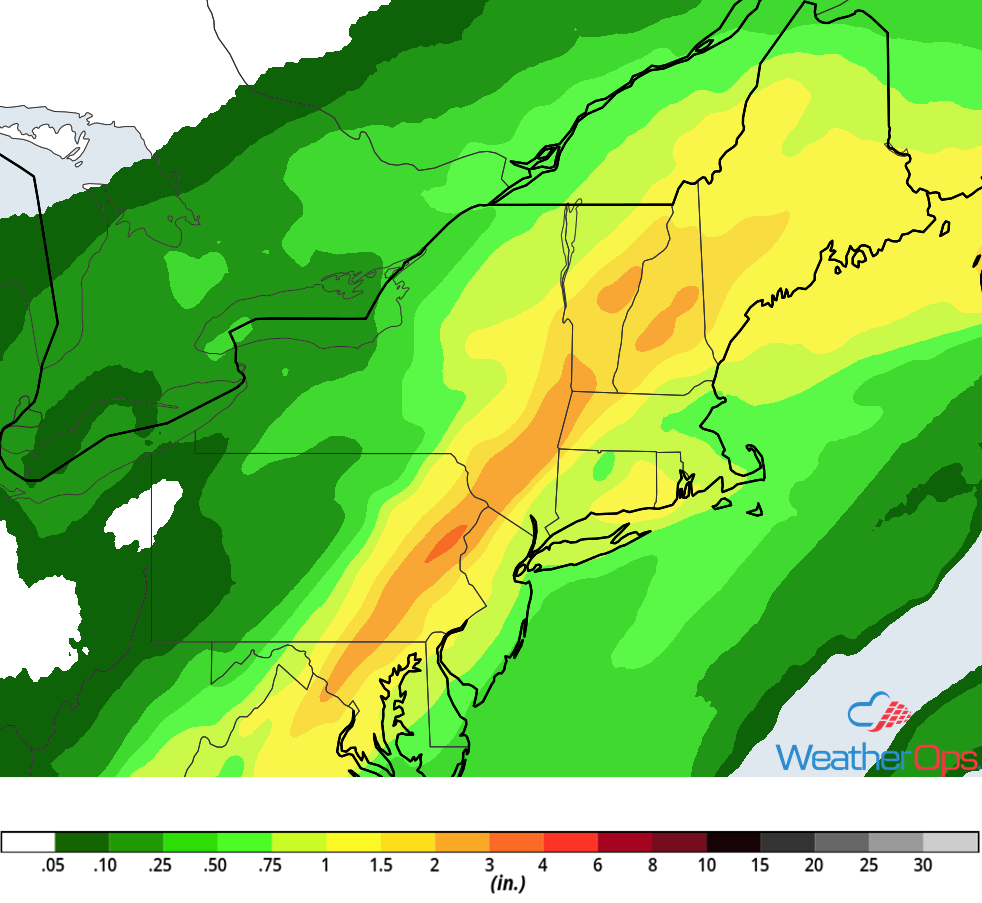 Risk for Excessive Rainfall across Maine on Saturday
A cold front will move across the Northeast on Saturday. Southerly flow will bring moisture into the region, allowing for an additional 1-2 inches with locally higher amounts in excess of 3 inches. This will allow for localized flash flooding.

Major Cities in Region: Portland, ME, Bangor, ME, Presque Isle, ME 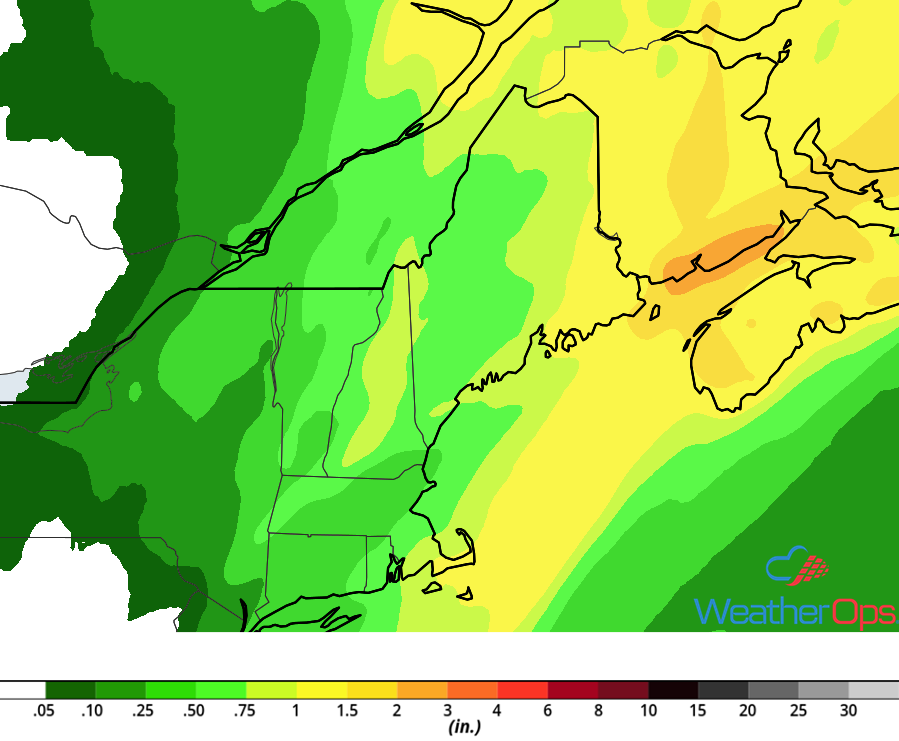 A Look Ahead
Showers and thunderstorms will extend from the Plains into the Great Lakes on Sunday as an area of low pressure moves eastward. This activity will extend from the Great Lakes into the Ohio Valley on Monday. Snow may develop across portions of the Rockies. Thunderstorms will extend along much of the East Coast on Tuesday as a cold front moves eastward. Another round of snow may develop across the Rockies on Wednesday.