National Weather Summary for Thursday, May 4, 2017

Thunderstorms will continue across the Southeast ahead of a cold front on Thursday. An upper level system moving into the Pacific Northwest will bring the potential for thunderstorms to the region. Heavy rain will continue for portions of the Midwest as an area of low pressure moves eastward. 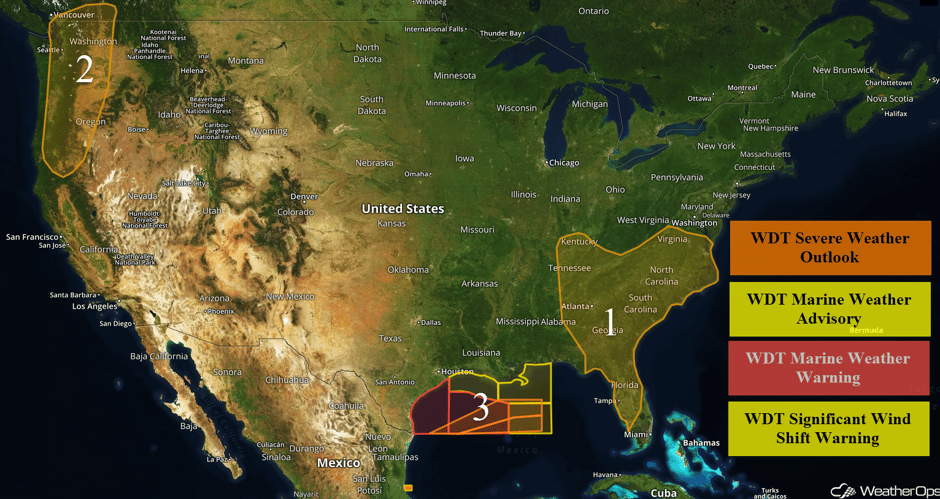 Strong to Severe Thunderstorms Possible Thursday across the Southeast
A few isolated severe storms will be possible today ahead of an intensifying surface low over Kentucky and Tennessee along with a cold front that extends southward into the Gulf of Mexico. In fact, a few severe storm warnings have already been issued for portions of the Florida panhandle this morning. An ongoing line of showers and a few embedded thunderstorms are steadily progressing eastward across Georgia and northern Florida. Primary forecast uncertainty involving today's severe weather potential will be whether early morning showers and cloud cover prevent further daytime heating and atmospheric destabilization, thus inhibiting the potential for more severe storms later this afternoon. However, there is enough confidence that at least adequate instability along with increasing wind shear with the approach of an upper air disturbance later today will allow for a risk of a few severe storms capable of producing damaging winds. An isolated tornado is not out of the question if enough clearing and daytime heating can occur over portions of Georgia and the Carolinas. The threat of at least damaging winds may spread as far north as portions of Virginia late this afternoon through this evening. A marginal threat of a strong storm may also persist across the Carolinas through the overnight hours.

Update 12:31am EDT: Tornado Warning in South Central Georgia. Strong shear has been indicated by the RadarScope Azimuthal Shear Product. 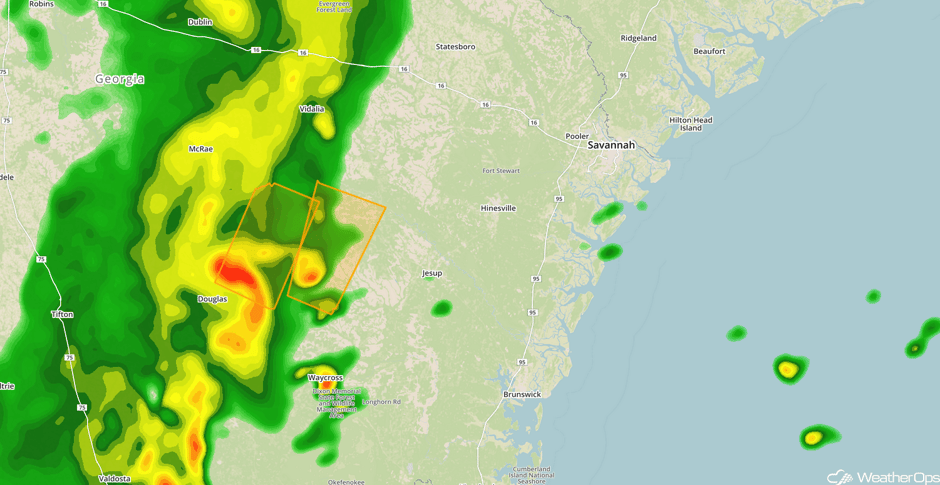 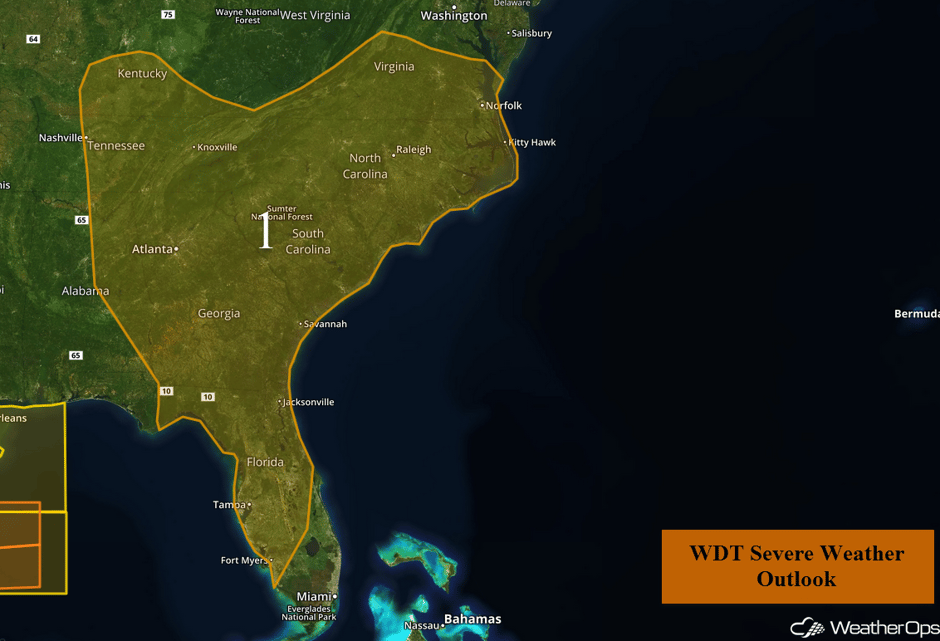 Thunderstorms for the Pacific Northwest on Thursday
A potent upper level disturbance is approaching the Pacific Northwest coast. Additionally, moisture will surge into the region this afternoon and evening. The combination of copious low level moisture and significant atmospheric lifting provided by the approaching disturbance should allow for the formation of showers and even a few isolated thunderstorms across western portions of Washington and Oregon by the early to mid afternoon hours. One or two strong storms will pose the risk of producing large hail in excess of 1" in diameter and damaging winds in excess of 50mph. A broken line of isolated strong storms will steadily advance eastward across central and eastern portions of Washington and Oregon late this afternoon into the overnight hours. 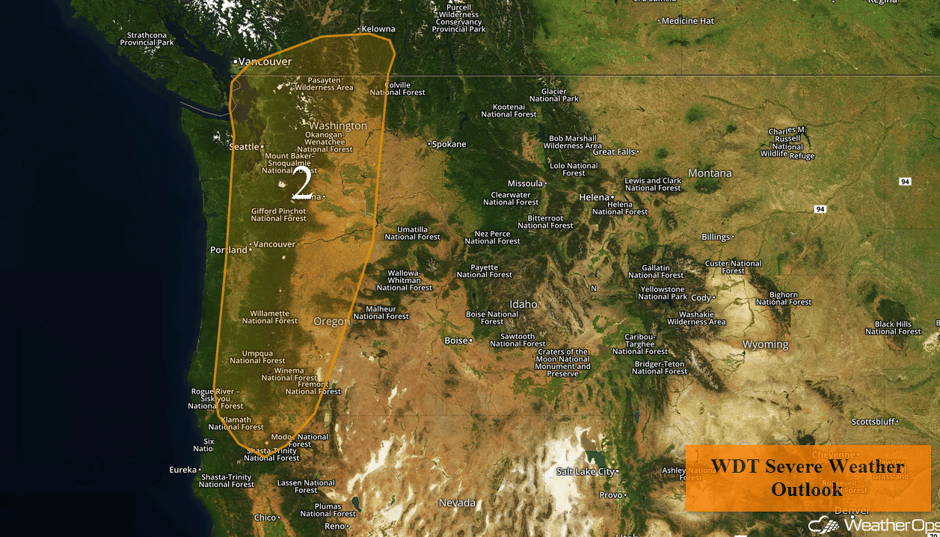 Elevated Conditions for the Gulf of Mexico through Friday
A moderate to strong cold front will continue to push across the region through early Friday, bringing elevated winds and seas, as well as thunderstorms. Southerly winds will become northerly at 25-35 knots with gusts in excess of 40 knots. Seas are likely to build to 9-12 feet in the wake of the front. Ahead of the front, isolated thunderstorms may develop; some of the stronger storms will be capable of winds in excess of 50 knots. Winds should subside Friday morning.

Excessive Rainfall Thursday Across the Midwest
Heavy to excessive rainfall is forecast throughout much of the day, to the north and west of low bringing strong to severe thunderstorms to the Southeast. Total rainfall accumulations of 2-3 inches with isolated higher amounts in excess of 4 inches are expected.

Major Cities in Region: Indianapolis, IN 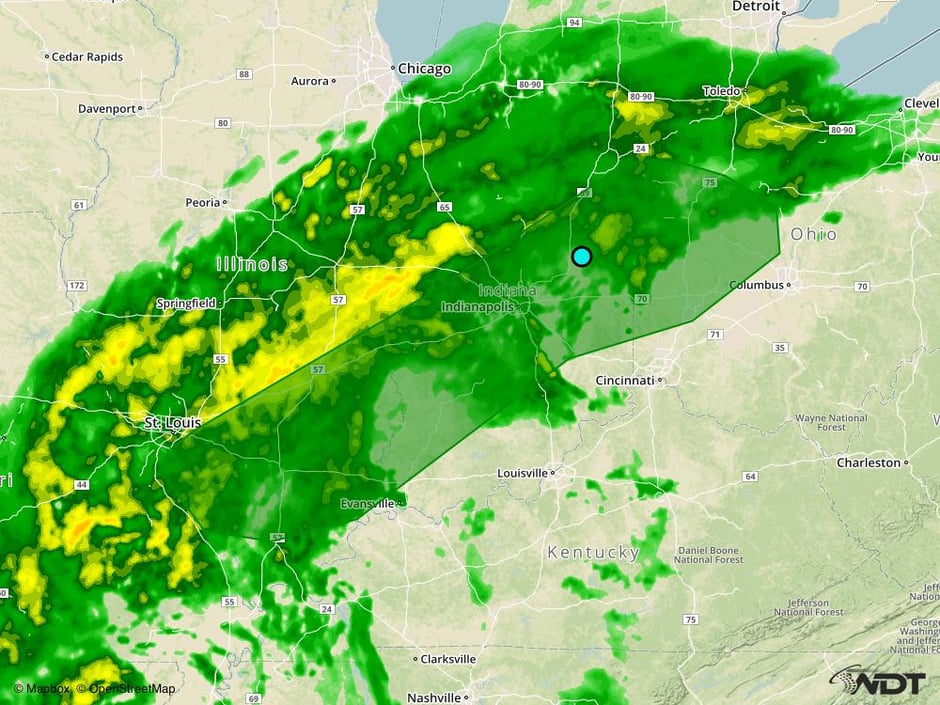 Thunderstorm Potential for the Northeast on Friday
Moisture across the region will allow for the development of thunderstorms ahead of a cold front. Some storms will be capable of producing gusty winds and small hail, along with frequent lightning and heavy rainfall.

Thunderstorms along the Atlantic Coast on Friday
The storm system moving through the Southeast will continue to track to the northeast throughout the day on Friday. During the morning hours, a line of thunderstorms is forecast to progress to the east and northeast across portions of the Atlantic Coast. With this line of storms, some may be strong to severe with severe wind gusts the primary hazard. 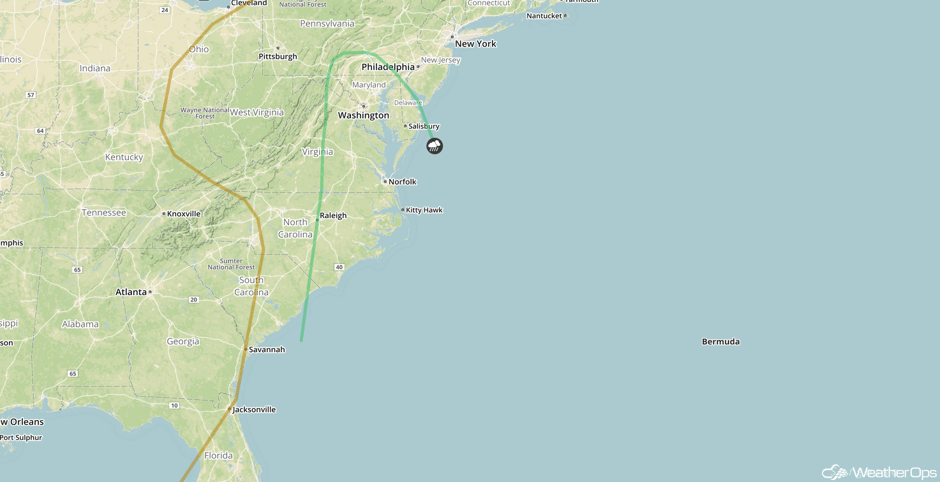 Risk for Thunderstorms Saturday across Montana
As a cold front continues to progress eastward across the Northern Rockies on Saturday, southeasterly winds are forecast at the surface. With these southeasterly winds, upslope flow will allow for lift along the Rockies. Increasing moisture and upper level support will allow for the development of strong to severe thunderstorms. Strong winds and large hail will be the primary hazards, along with frequent lightning and heavy rainfall. 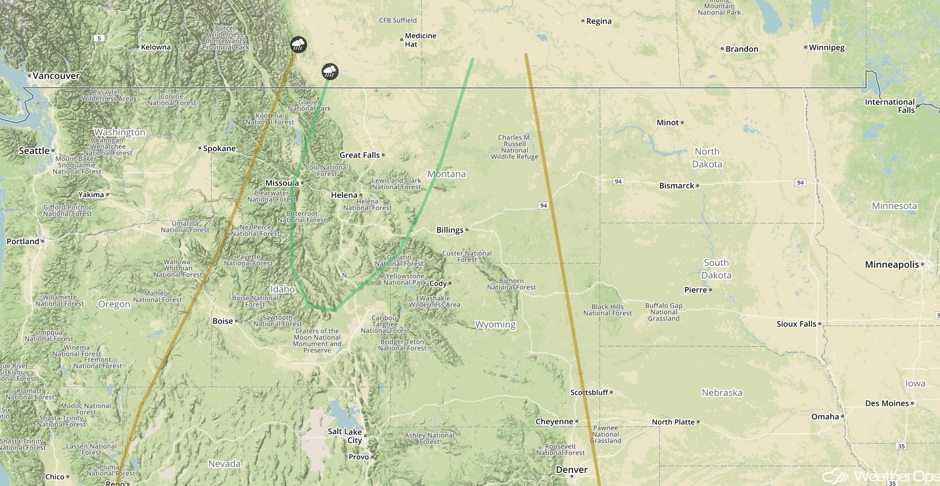 A Look Ahead
Fairly quiet conditions will continue for much of the weekend and into early next week. By Wednesday, moisture will surge into Texas. With a dryline extending southward from an area of low pressure, there is a risk for the development of thunderstorms across portions of Texas.