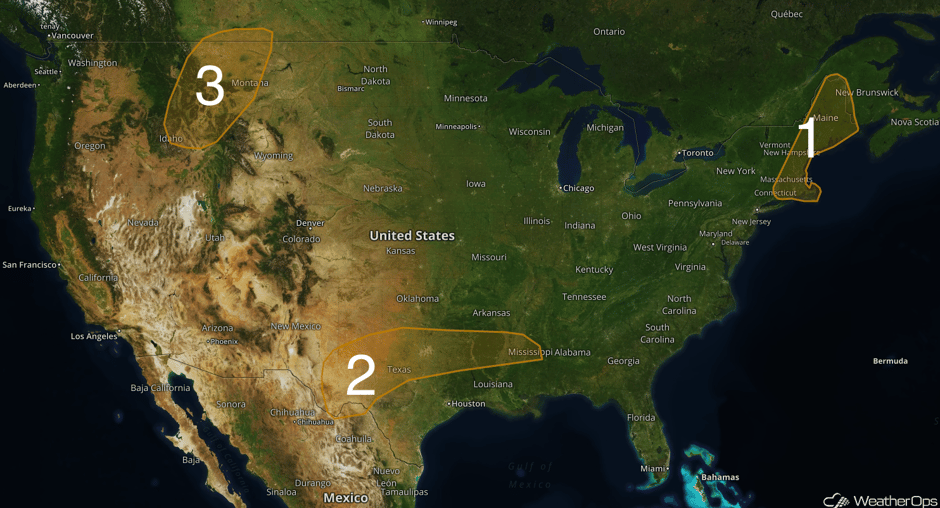 Thunderstorms Possible for New England Thursday
A weak surface trough advancing eastward across New England will be positioned from western Maine southward into New Hampshire, Massachusetts, and Connecticut by midday. Low level moisture and instability will be maximized along, and immediately ahead of the trough during the early to mid afternoon hours. A broken line of isolated, strong to severe storms capable of producing wind gusts in excess of 40-50mph is expected to develop in this area. By the early evening hours, the threat is expected to have shifted into eastern Maine and the Cape Cod area. Storm chances will lower dramatically overnight. 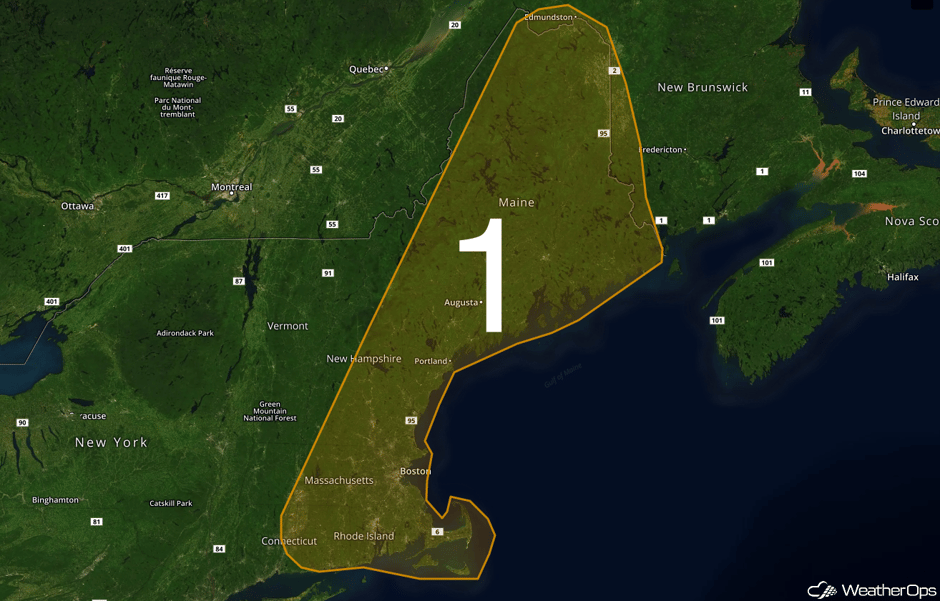 Thunderstorm Potential Thursday from North Texas to Lower Mississippi Valley
Widely scattered showers and thunderstorms are ongoing from roughly Abilene eastward along I-20 into Dallas and Shreveport. This activity is generally non-severe although pockets of heavy rain and moderate to frequent lightning do exist. A few stronger storms may develop later this afternoon as the atmosphere becomes slightly more unstable. The greatest threat area will remain across northeast Texas extending into the lower Mississippi Valley due to a weak upper level impulse draped from west to east across the region. Strong wind gusts in excess of 40-50mph will be the main hazard with a marginal, secondary risk of large hail. Storm coverage is likely to decrease substantially after sunset. Some redevelopment is likely across west Texas late tonight as another upper level impulse arrives from New Mexico. 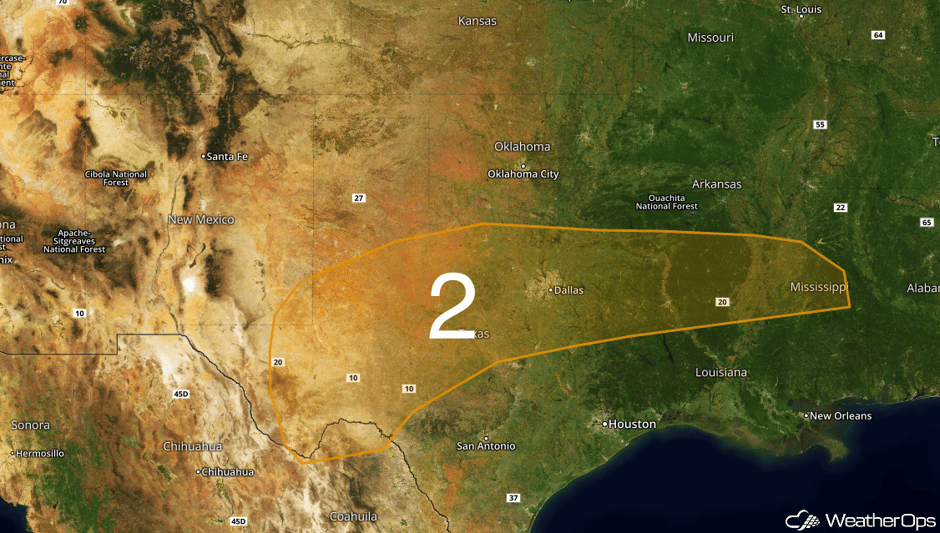 Risk for Thunderstorms Thursday across the Northern Rockies
A very marginal threat of strong storms capable of generating wind gusts in excess of 40-50mph will exist this afternoon. An upper level disturbance will pass over adequate dewpoints and instability at the surface. Storms capable of producing such winds will be very spotty. 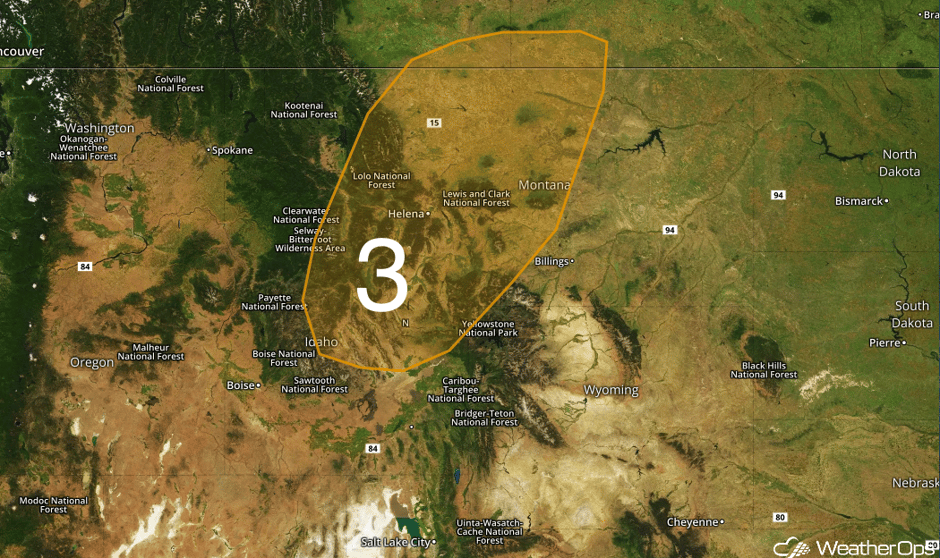 Strong to Severe Thunderstorms Friday from Northern Plains into the Midwest
There will be a chance for severe thunderstorms across the Northern Plains into the Midwest on Friday. A low pressure area will deepen across the far Northern Pains, with associated warm and cold fronts to extend through the Midwest and High Plains, respectively. Thunderstorms will begin to form during the afternoon hours, with activity to be more widespread along the warm front, and isolated to scattered ahead of the cold front. Primary hazards will be large hail and damaging wind gusts. 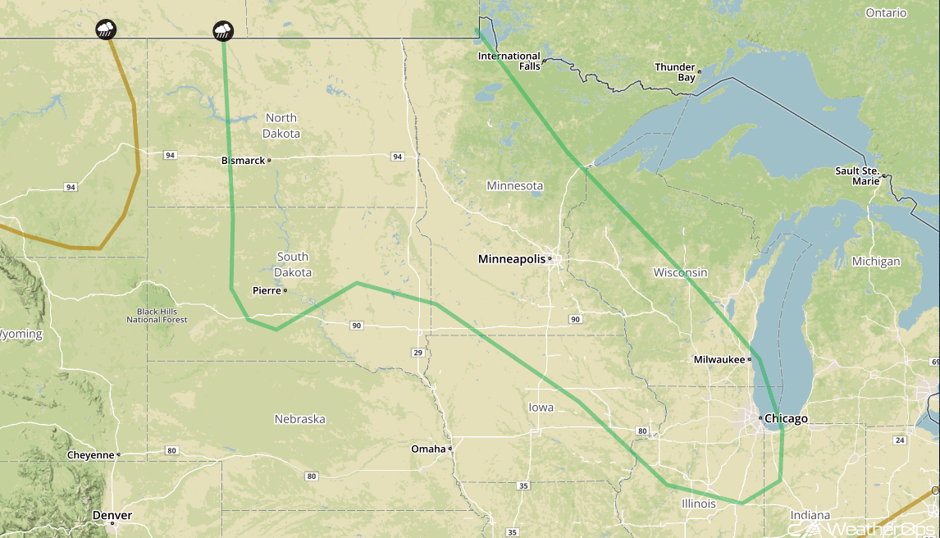 Thunderstorms from the Great Lakes to Southern Plains on Saturday
A low pressure area will continue to track through the Northern Plains on Saturday, with the severe weather threat to slightly shift east into the Great Lakes/Mississippi Valley and portions of the Southern Plains. Moisture will be abundant across the region, and showers and thunderstorms will likely be ongoing for much of the morning, afternoon, and early evening. Activity will likely be scattered in nature, with some storms becoming strong or severe. Primary hazards will be isolated large hail and strong wind gusts into the early evening. 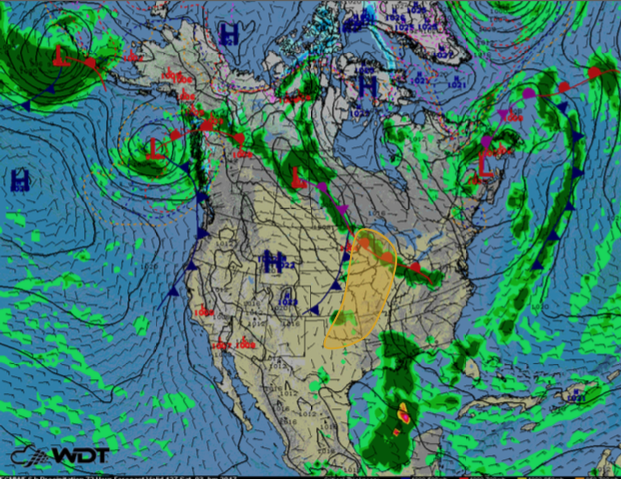 A Look Ahead
There will be a risk for thunderstorms on Sunday from the Mid Atlantic into the Mississippi Valley during the afternoon and evening. Large hail and damaging winds will be the primary hazards with any storm that develops.