Snow for the Southern Plains and Midwest on Monday
A strong cold front will continue to push eastward bringing cold air to the region. A disturbance is making its way across the region, producing moderate to heavy snowfall across the Texas Panhandle, South and Central Kansas, as well as Western and Central Oklahoma. Snow accumulations of 1-3 inches are expected across Central and Eastern Oklahoma as well as Central Missouri. Across Illinois, Indiana, and portions of Michigan, up to two inches are forecast. Gusty winds could result in blowing snow and reduced visibilities. 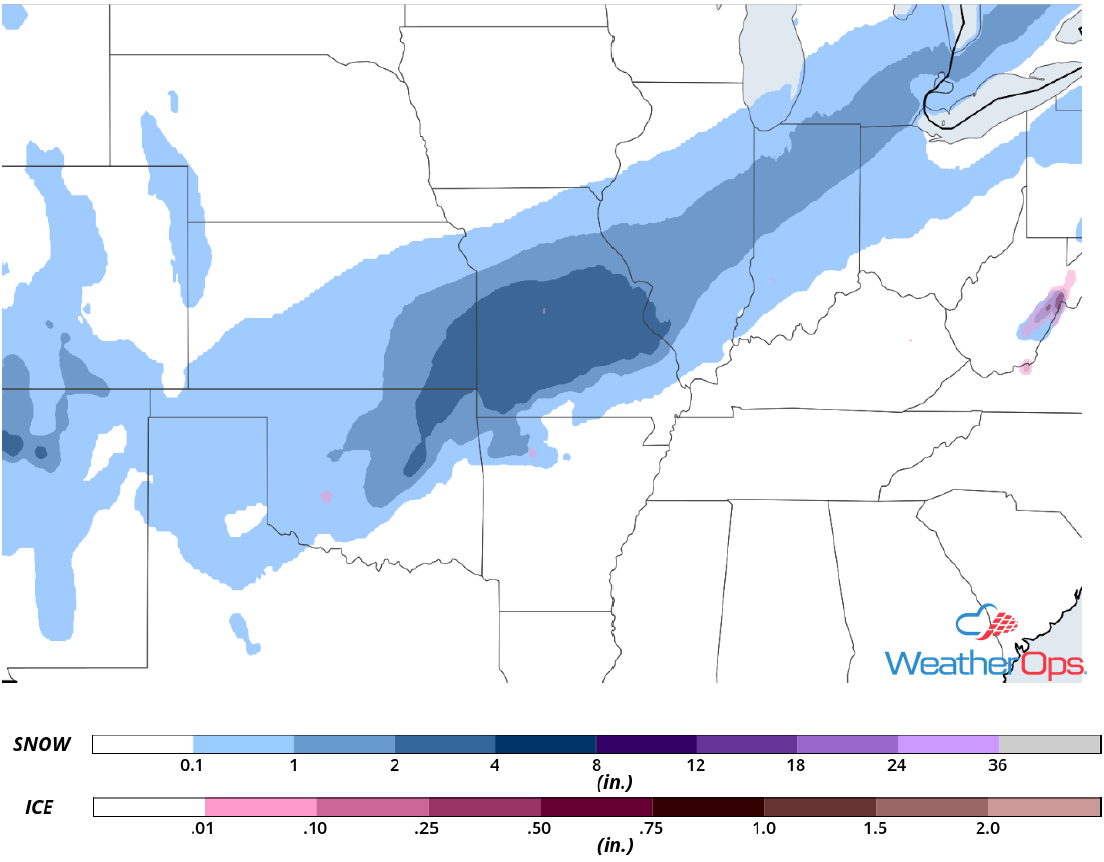 Thunderstorms Monday across the Southeast
Thunderstorms will continue through the day ahead of a cold front. Ample moisture has destabilized the atmosphere. As the day progresses, daytime heating will allow instability to build and a line of thunderstorms is expected to develop along the cold front later today. Gusty winds will be the primary hazard, but an isolated tornado cannot be ruled out. 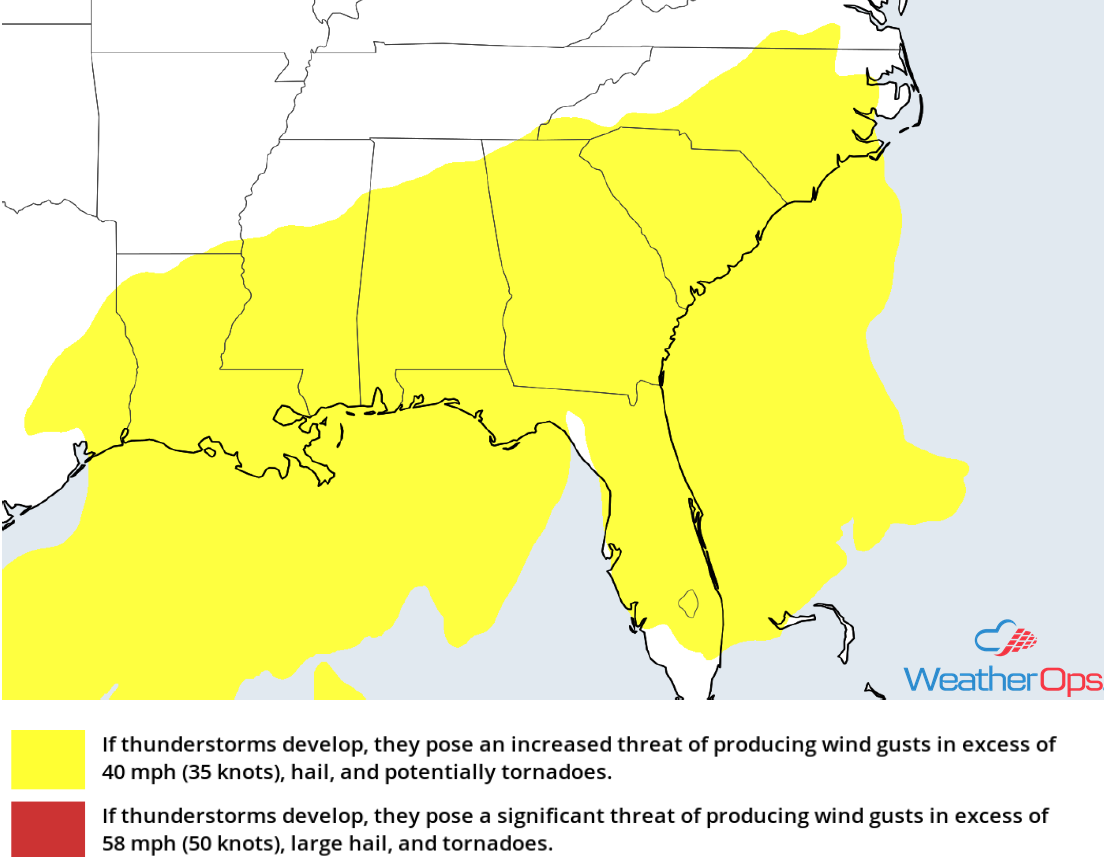 Excessive Rainfall for the Southeast Monday
In addition to the thunderstorm potential described above, there will be a potential for excessive rainfall across portions of the Southeast. Rainfall amounts will range 1-3 inches, with locally higher amounts in excess of 4 inches, resulting in flooding and flash flooding. 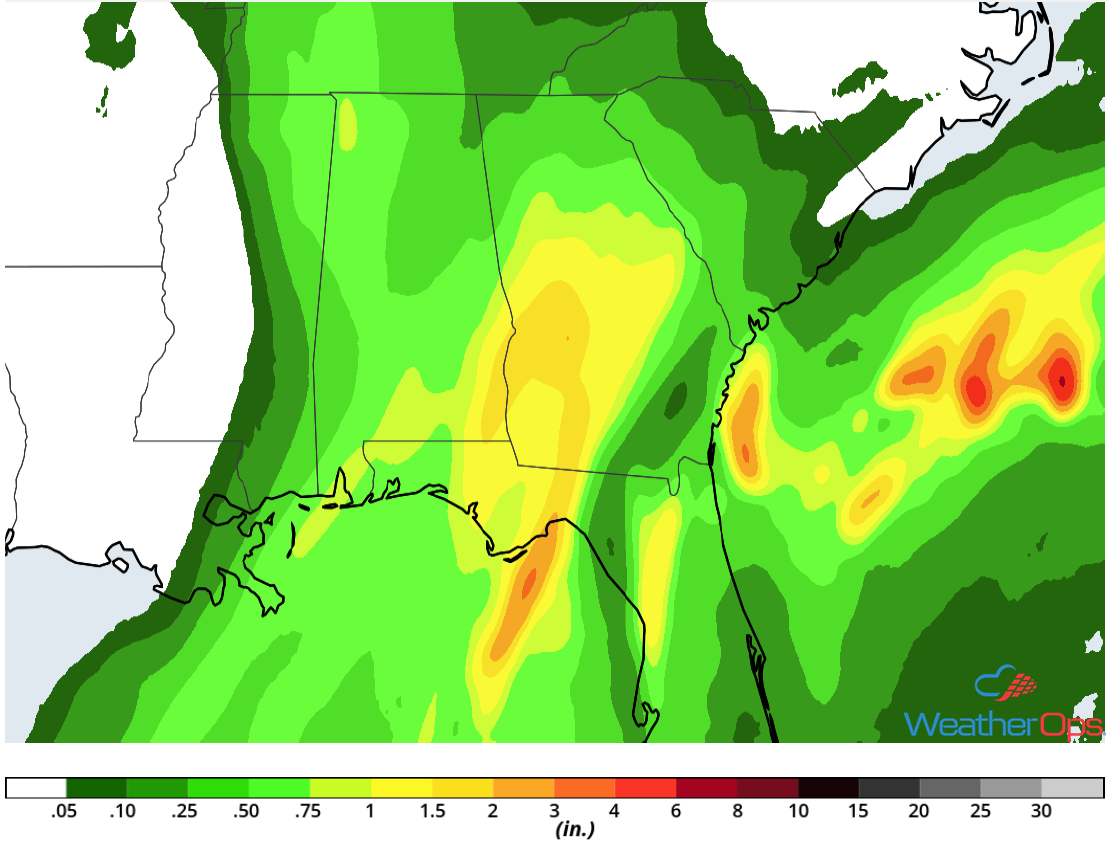 Elevated Winds and Seas through Thursday Morning for the Gulf of Mexico
A cold front will begin tracking across the Gulf of Mexico around midday today. Ahead of the front, winds will be west-southwesterly to west-northwesterly at 15-20 knots. Behind the front, winds will be north-northwesterly to northerly at 25-35 knots with gusts in excess of 40 knots. In addition, thunderstorms will continue along and ahead of the cold front. Waterspouts, wind gusts in excess of 40 knots, heavy rain, and frequent lightning will be the primary hazards with these storms, Seas will range 9-12 feet near the shore and 12-17 feet in the deeper waters. Across the central Gulf of Mexico, seas of 10-15 feet are expected. Elevated winds and seas will continue through early Thursday morning. 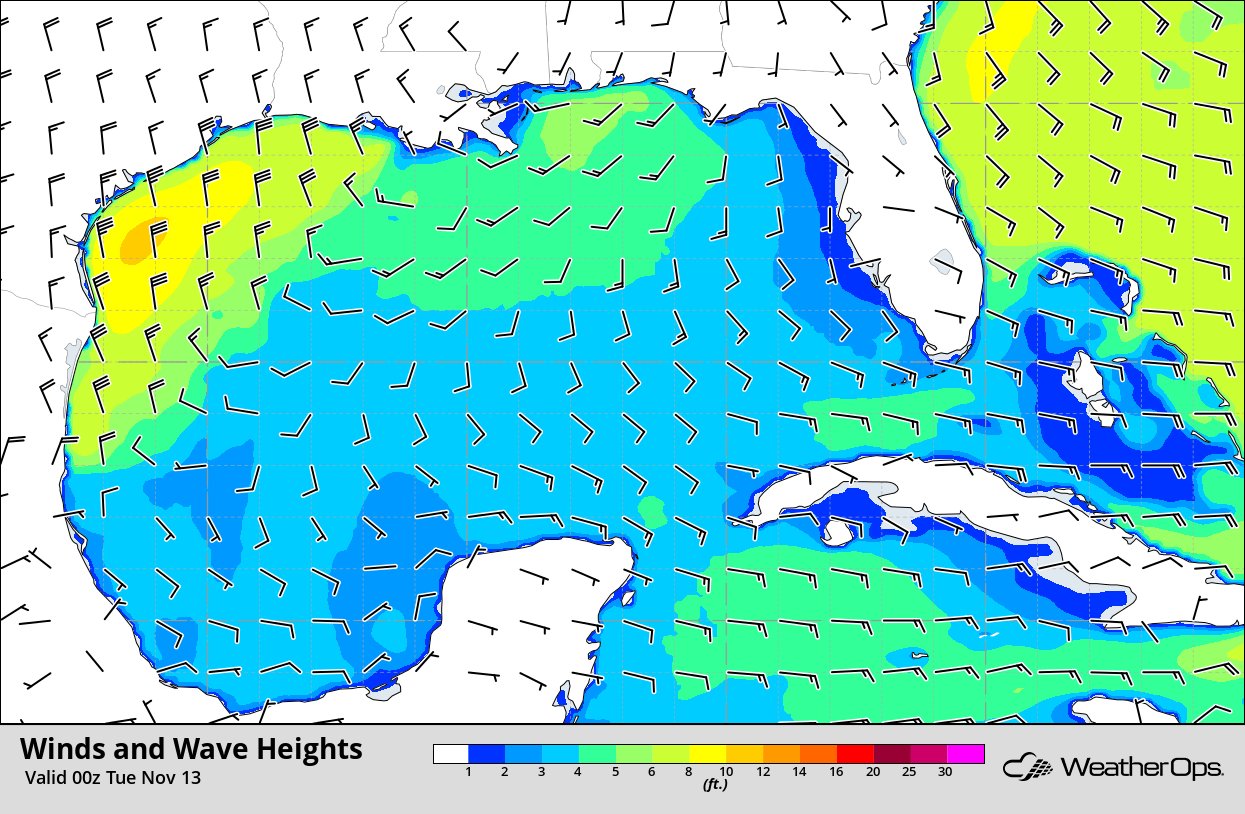 Potential for Snow across the Northeast Tuesday
A strong area of low pressure is expected to move northward across the region Tuesday into early Wednesday morning. Snowfall totals will range 1-3 inches from Upstate New York into Maine. Warmer air will be present across the region, which could allow for freezing rain along the southern periphery of the low, but most areas will see just a glaze of ice. Gusty winds could lead to blowing or drifting snow, making roads slick and hazardous. Use extreme caution while driving, particularly on the Tuesday evening commute. 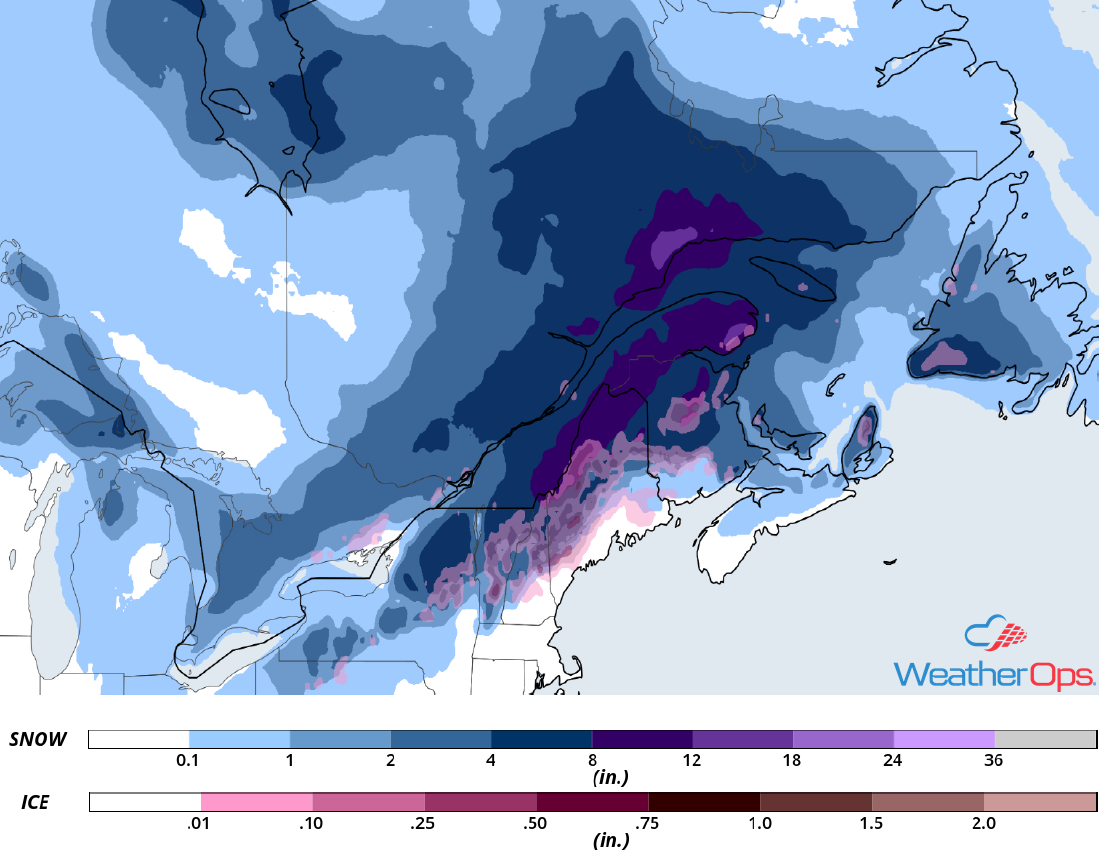 Excessive Rainfall for Georgia on Wednesday
An area of low pressure is expected to produce showers and thunderstorms across the region on Wednesday. Ample moisture is expected across the region, which should allow this activity to produce moderate to heavy rainfall. Widespread rainfall totals of 2-3 inches are expected with locally heavier amounts in excess of 4 inches are expected. Rainfall from Monday and Tuesday will saturate the ground, leading to a risk for increased flooding and flash flooding. 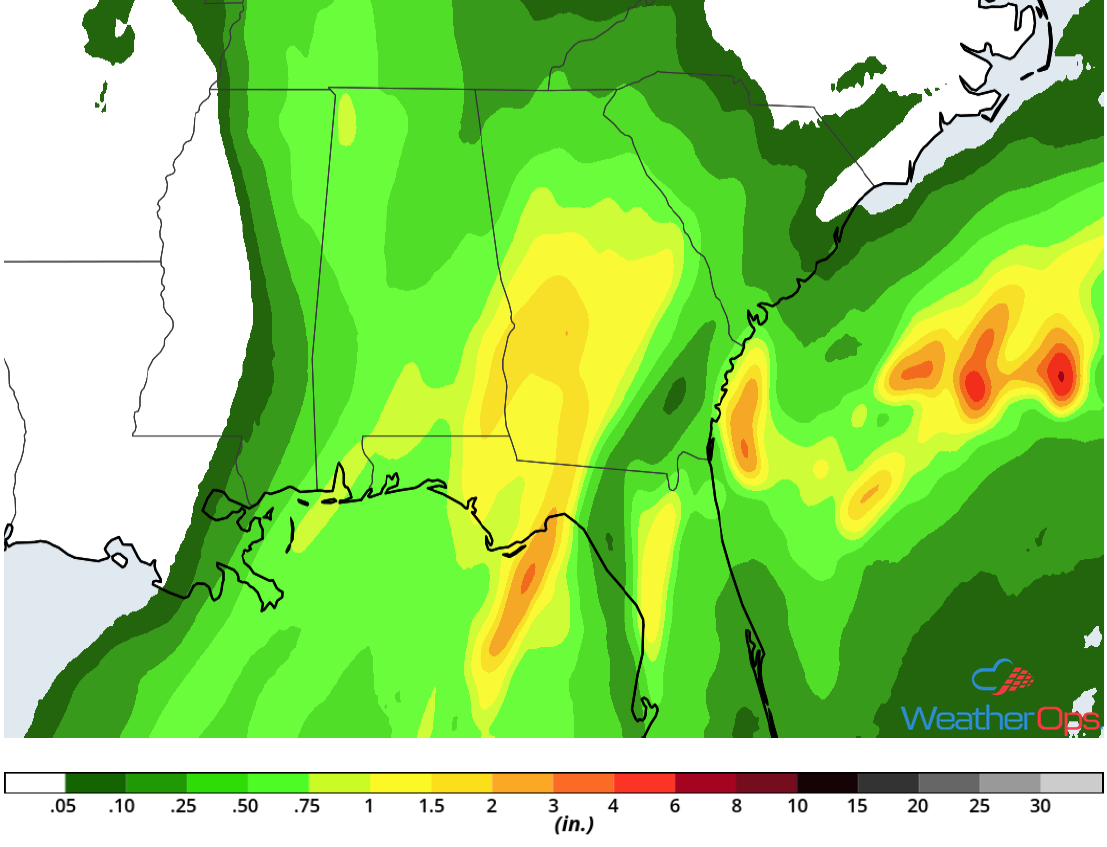 Tropical Update
A tropical wave about 200 miles east of the Leeward Islands is producing a large area of showers and thunderstorms over the western tropical Atlantic. Shower and thunderstorm activity has increased and conditions are expected to become more favorable for the development of a tropical depression or storm over the next day or two. This disturbance is forecast to move westward to west-northwestward for the next few days, passing near or north of the Leeward Islands, Puerto Rico, Hispaniola, and the southeastern Bahamas. 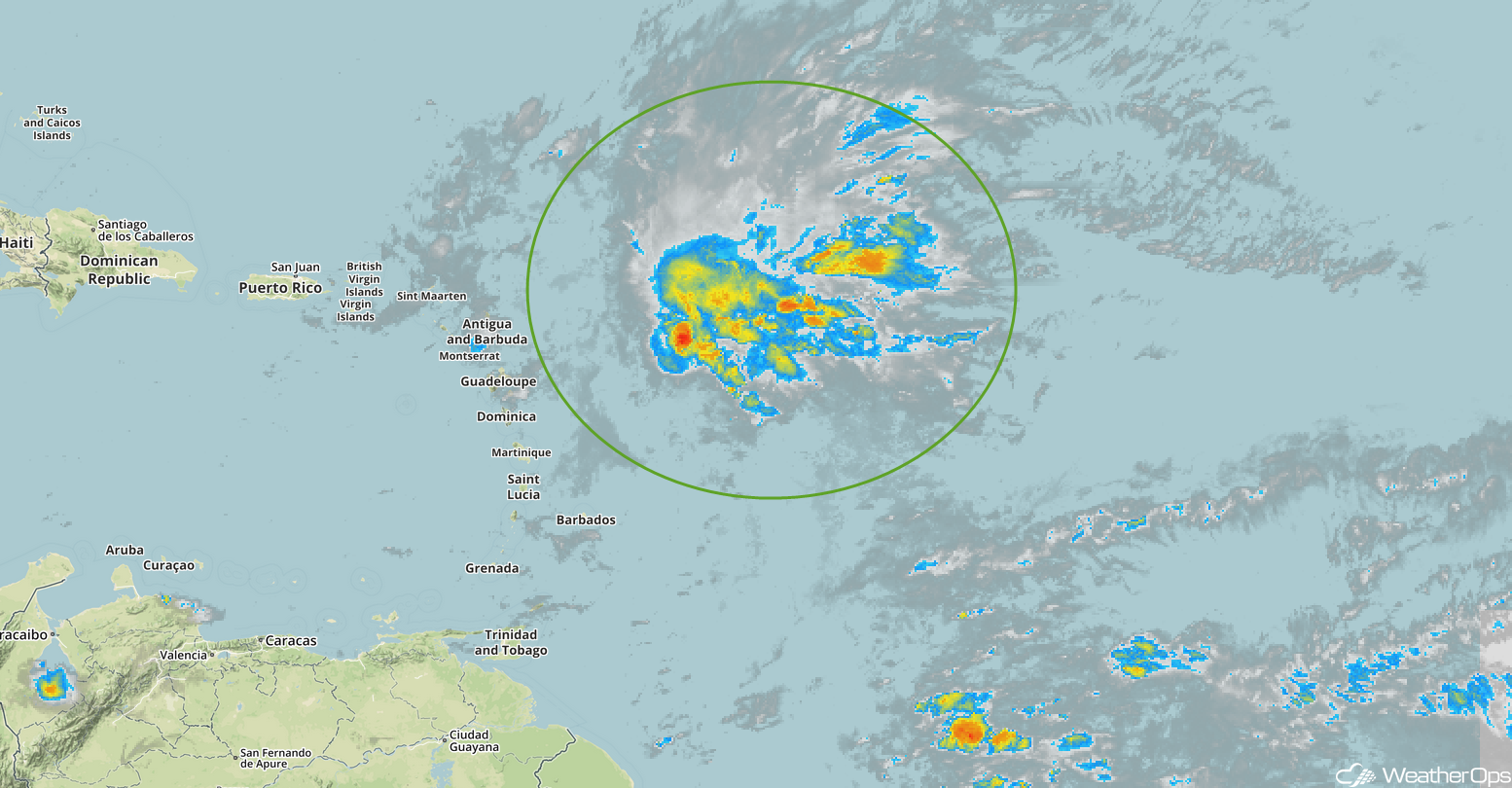 A Look Ahead
Snow may develop across the Ohio Valley on Thursday as an area of low pressure moves eastward. Further east, freezing rain is forecast over portions over the Mid Atlantic and the Northeast. By Friday, the freezing rain will transition to snow and spread northward across the Northeast and New England. Going into the weekend, snow is forecast from the Central Rockies into the Midwest on Saturday. Light snow and freezing rain may develop Sunday across portions of Texas and Oklahoma.