A potent Nor'easter will cause plentiful snowfall to overspread the Northeast late Monday through Wednesday night. Strong thunderstorms are possible this afternoon in Florida. Thunderstorm activity is developing in the central Gulf Coast.

An upper low is quickly approaching the Midwest region this evening. Increasing light to moderate snow is forecast to develop during the morning hours on Monday and linger into Tuesday evening. Snowfall accumulations will remain largely on the lighter side with totals ranging from 1 to perhaps 3 inches.  Locally higher amounts of 4+ inches will be possible, especially across northeast Ohio where lake effect may enhance local snowfall totals. 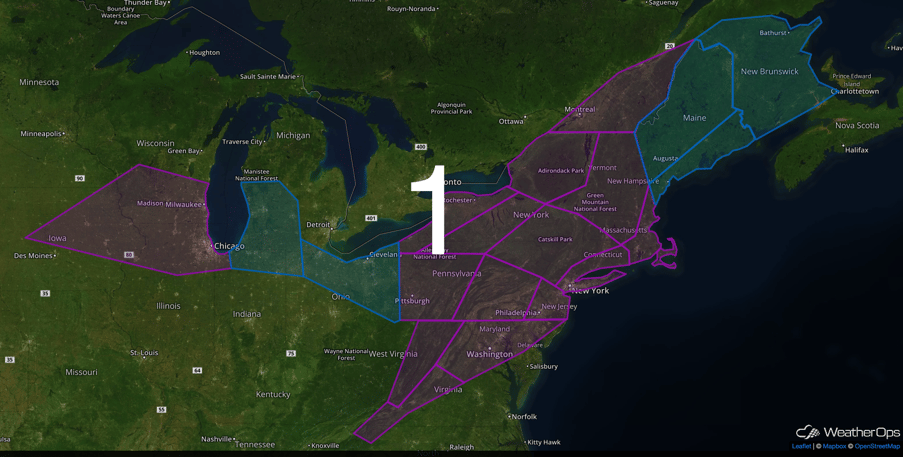 Over the next 12 hours, a stalled frontal boundary over the Florida peninsula will gradually lift northward ahead of a broad surface low developing over the eastern Gulf of Mexico. Locations south of the warm front, and east of the surface low will face a low risk of isolated severe storms during the evening hours. Low instability combined with moderate wind shear may generate a couple strong storms capable of generating a brief, landfalling waterspout or tornado near the coast from Tampa southward to Fort Myers. Any rotation is likely to weaken significantly as the storms in question move inland. Otherwise, the primary threat with any organized thunderstorms will be the risk of damaging winds in excess of 50mph. Severe weather will come to an end no later than 5AM tomorrow morning as a cold front stabilizes the atmosphere across central and southern Florida. 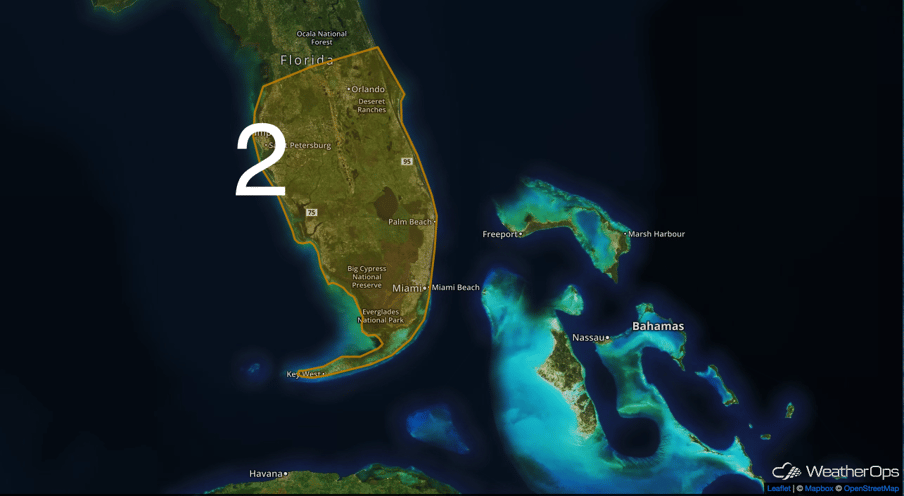 Low pressure developing over the central Gulf this morning is resulting in a very changeable wind field across the region. There is also thunderstorm activity developing in the vicinity of the low resulting in local variations in wind speed and direction. The low is forecast to move quickly eastward today and this will result in the easterly winds currently over the advisory area turning/shifting to the north from west to east through the afternoon hours. By 4 to 5 PM the majority of the advisory area should be experiencing fresh to strong northerly winds. 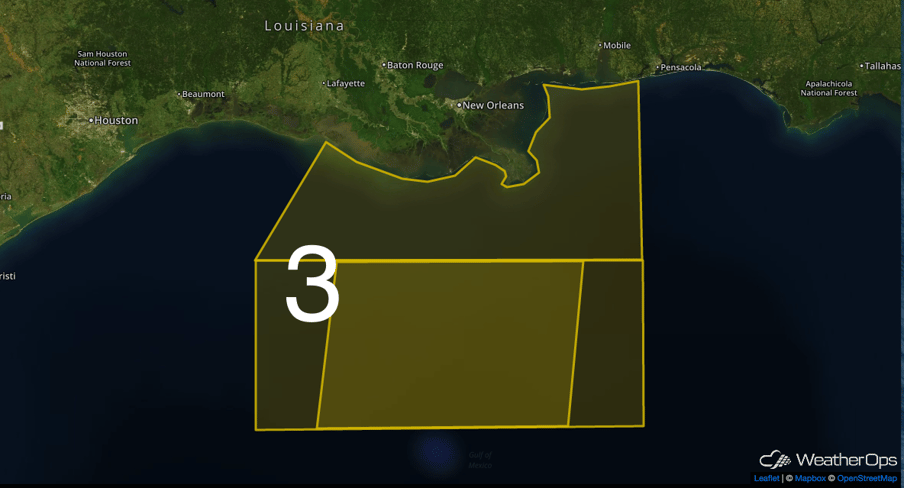 A significant winter storm will begin taking shape for portions of the Ohio River Valley and the Mid-Atlantic on Monday. Light to moderate snowfall will continue to fall across portions of the Great Lakes Monday morning and spread southeastward in association with a southeastward moving low pressure system. This will bring widespread accumulations of 3-6 inches across the region. At the same time low pressure will begin to track along the Southeast coastline towards the Carolinas during the afternoon and early evening hours. During the overnight hours the low pressure system that had brought light to moderate snowfall to the Great Lakes and Ohio River Valley will begin to transfer its upper level energy to the coastal low resulting in rapid intensification of the coastal low pressure system near the Del-Marva Peninsula. With cold air in place on the northwestern periphery of the system a large swath of heavy snowfall looks to develop across much of the Mid-Atlantic and track northeastwards overnight towards the Northeast. Model guidance suggests that snowfall amounts of 6-12 inches, locally 15+, appear likely to occur during the overnight hours across the Mid-Atlantic. 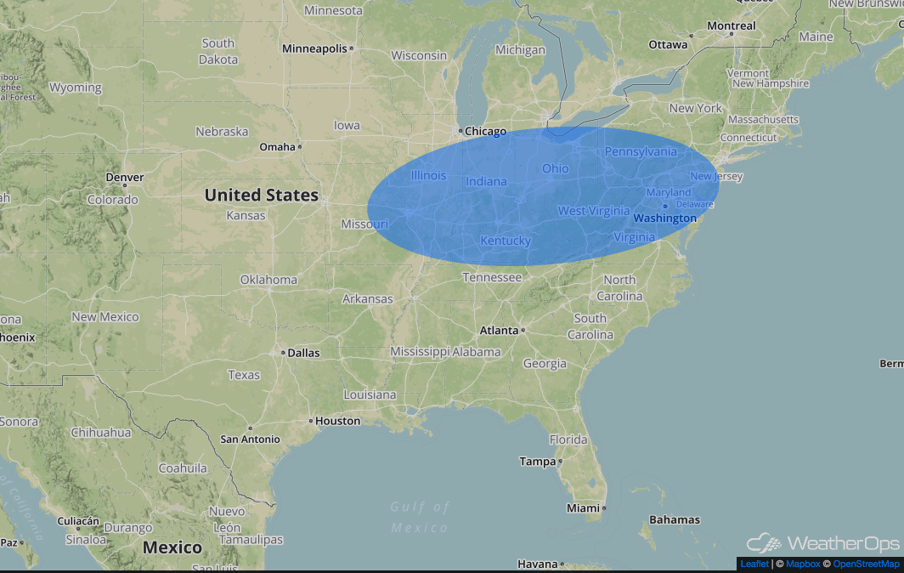 Significant Snowfall Possible for the Northeast on Tuesday

By the morning hours on Tuesday a powerful Nor’easter will begin to impact the Northeast and slowly depart the Mid-Atlantic. With this powerful low pressure system tracking so close to shore a large swath of heavy snowfall will be likely across much of the Northeast on Tuesday. In addition to the heavy snowfall blizzard conditions also appear very likely especially along the coastline from New Jersey up to Massachusetts given the lows proximity to the coast. Current model guidance also suggests that as snowfall overspreads the region snow bands will be capable of producing snowfall rate of 1-3 inches per hour with a few isolated heavier bands capable of producing snowfall rates in excess of 4 inches per hour and thundersnow. Model guidance currently suggests that a large swath of 12-18 inches of snowfall is likely to occur across the region with a band setting up somewhere in the northeast of 18-24 inches. This is forecast to be a very potent storm capable of reducing all movement across the major Northeast cities to a standstill throughout much of the day Tuesday. 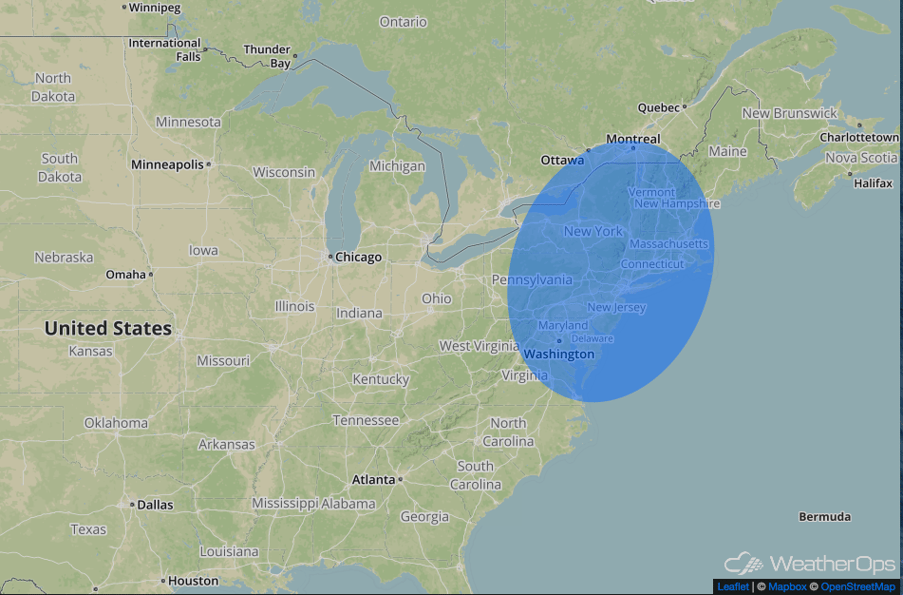 Light to possibly moderate snowfall will continue to persist across portions of the Great Lakes and Northeast over the weekend as an eastward tracking low continues to make its way towards the Mid-Atlantic coastline. Further to the south where warmer air resides light to moderate rainfall will overspread the Southeast and Mid-Atlantic Saturday afternoon and evening. Most if not all precipitation will exit the eastern US by Sunday as the low pressure system heads out into the North Atlantic. Further west, a low pressure system in the Pacific will continue to bring rain and mountain snowfall to the Pacific Northwest over the weekend.