Thunderstorms may develop across portions of Arizona and New Mexico on Friday as an upper level trough lifts out of the region.

Thunderstorms across Portions of Southern Arizona and New Mexico on Friday
An upper level system will be moving over the region today and should provide sufficient lift for the development of isolated strong to severe thunderstorms. The atmosphere is moist enough to become unstable as daytime heating reaches its maximum during the afternoon. Storms could begin to develop by the mid afternoon with large hail and damaging winds the main hazards. The risk should diminish during the evening with the loss of daytime heating.

Thunderstorm Potential Friday for the Eastern Great Lakes
A surface low associated with an upper level trough over Canada will be moving eastward today, and a cold front will extend to the southwest. Widely scattered showers and thunderstorms are expected to develop along and ahead of the front starting in the afternoon. These storms are expected to develop over Lake Erie and move to the southeast. Damaging winds will be the primary hazard, but a few instances of large hail cannot be ruled out. The severe threat should diminish as the cold front moves through.

Risk for Thunderstorms across the High Plains Saturday
An upper level trough will slowly be making its way across the western US on Saturday. At the surface, an associated area of low pressure and fronts will track across southern Canada and the Intermountain West toward the Plains into Sunday. With southerly flow increasing ahead of the trough, low level moisture will be brought northward. Combined with daytime heating, instability will build across the High Plains. This will allow for the development of isolated to widely scattered showers and thunderstorms, with some of these storms becoming strong to severe. Hail and damaging winds will be the primary hazards with these storms. 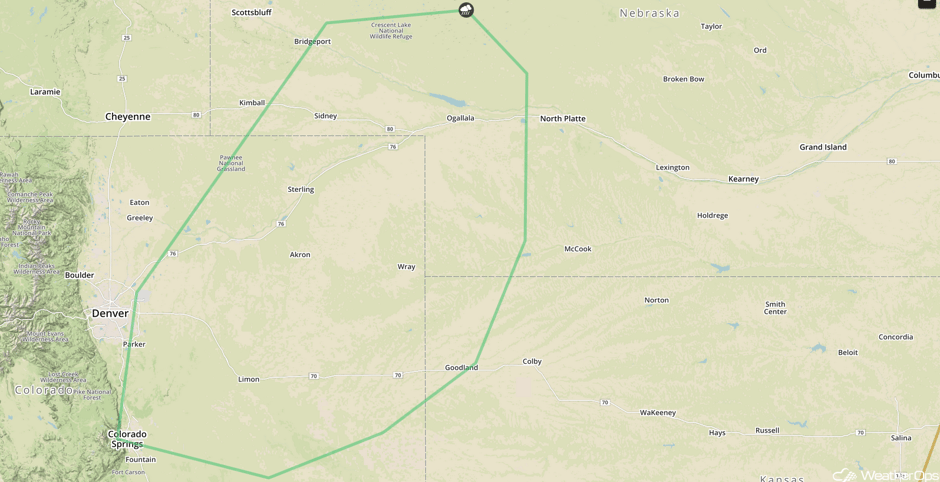 Potential for Thunderstorms Sunday across the Central Plains
The upper level trough described above will continue to slowly track eastward Sunday into Monday. As a result, southerly flow at the surface will continue to bring low level moisture northward into the Central Plains Sunday. Daytime heating will allow instability to build across the region. With a cold front slowly tracking across the Plains on Sunday, scattered shower and thunderstorm development is anticipated along and just ahead of the front. Some of these storms could become strong to severe. Hail and damaging winds will be the primary hazards with these storms.

Tropical Update
Tropical Storm Maria (green oval) is 350 miles north-northeast of Bermuda and is moving eastward at 21 mph. A turn to the east-northeast at a faster forward speed is expected later today and Maria will continue to accelerate to the north through Sunday. Maximum sustained winds are at 60 mph with higher gusts. Little change in strength is expected during the next 48 hours, but Maria is expected to become an extratropical low by Saturday night.

Hurricane Lee (red oval) is a minimal hurricane with maximum sustained winds of 75 mph. Lee is currently 810 miles northeast of Bermuda and moving toward the northeast at 25 mph. Additional weakening is expected with Lee becoming a tropical storm later today and dissipating by Saturday evening

A broad area of low pressure interacting with an upper level low is producing a large but disorganized area of cloudiness and showers (orange oval). This activity extends from the northwestern Caribbean Sea northward across western Cuba to the southern Florida peninsula. The trough has slowly moved westward since yesterday, and a weak low is now likely to form from this system near the west coast of Florida during the weekend. Environmental conditions appear to be conducive for some development before the upper level winds become less favorable early next week. Regardless of development, this system is likely to produce locally heavy rainfall over portions of central and western Cuba, the Florida Keys, and the Florida peninsula during the next several days.

A tropical wave is producing cloudiness and showers over the northeastern Caribbean Sea and the adjacent Atlantic waters (blue oval). Although there is no sign of organization and surface pressures are not falling at this time, conditions could become a little more favorable for some development next week while the system moves toward the west-northwest. This system is expected to bring locally heavy rain over the northern Leeward Islands, including Puerto Rico and the US Virgin Islands. 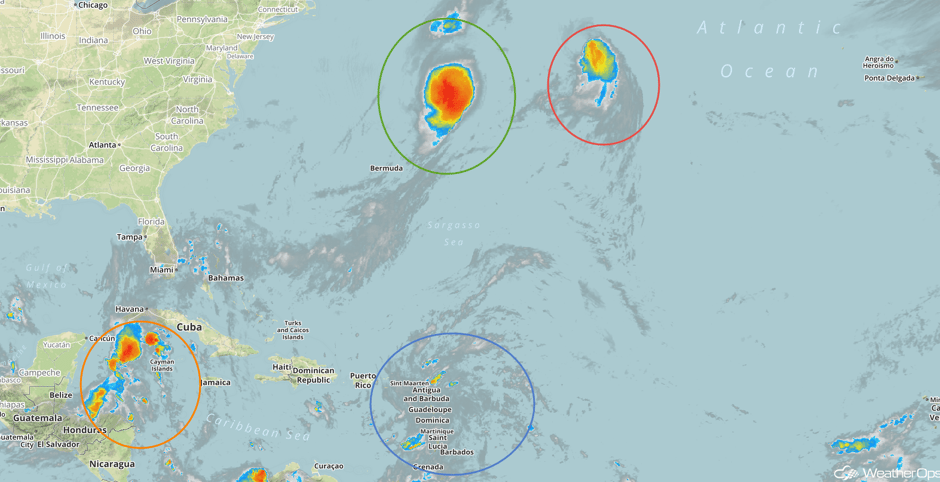 A Look Ahead
A few showers and thunderstorms may develop across portions of the Central Plains and Upper Midwest ahead of a cold front Monday into Tuesday. These storms should be non-severe. Elsewhere, high pressure should dominate much of the country.