Extreme flooding is expected to continue through Tuesday for North Carolina and the Mid Atlantic region as Hurricane Florence moves inland. Thunderstorms in association with Florence will continue along the Carolina coast through Saturday. Moisture associated with a tropical wave will bring a risk for excessive rainfall through Saturday to portions of South Texas.

Excessive Rainfall Continuing through Tuesday for North Carolina and Mid Atlantic
Extreme flooding is underway from Greenville, NC southward to Ocean Isle Beach, NC. Isolated rain totals along the immediate coast have already exceeded 20 inches as the eye has crossed the shoreline near Wrightsville, NC. Over the next 12-24 hours, intense rainbands and associated excessive rainfall amounts will slowly spread farther inland between Myrtle Beach and Florence, SC, as well as Fayetteville to Greenville, NC. Intense rain bands will persist along the coast. Squall frequency and rain rates will also slowly trend upward closer to Raleigh and Charlotte. Over the next 48 hours, additional rain amounts in excess of 15-25 inches are forecast between Florence, SC and Havelock, NC. By Tuesday morning, rainfall amounts in excess of 10 inches are expected inland from near Columbia, SC, northward into Charlotte, NC, and even into the mountainous areas of Virginia southwest of Roanoke. 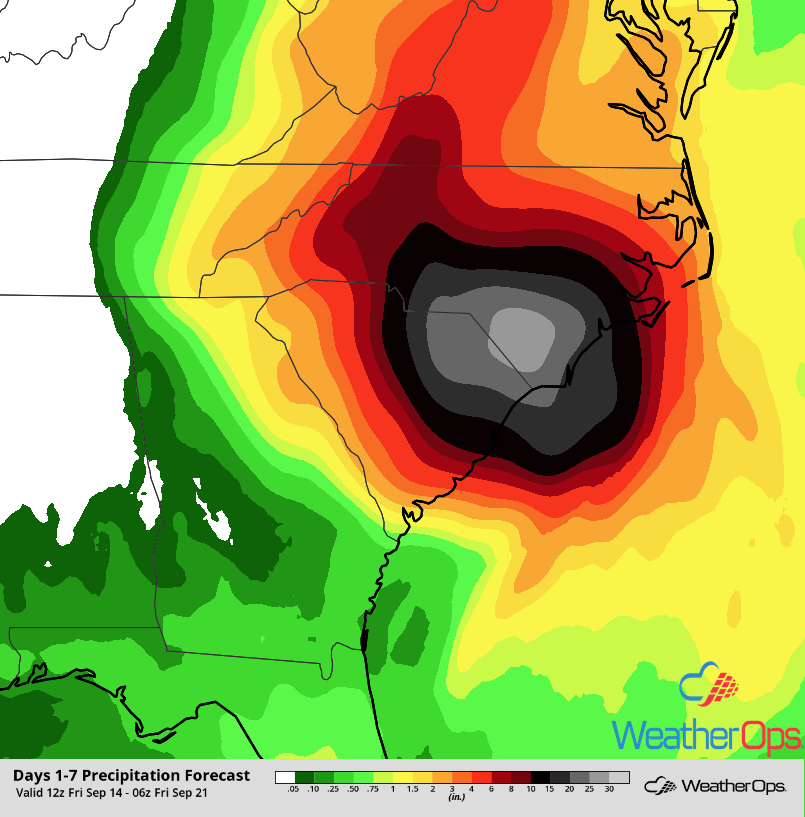 Thunderstorms for the Carolina Coast through Saturday
Tornado warnings have already been issued within the outer rainbands of Florence moving through portions of North Carolina. The potential for isolated tornadoes will continue for the next two days as Florence slowly moves through the Carolinas, 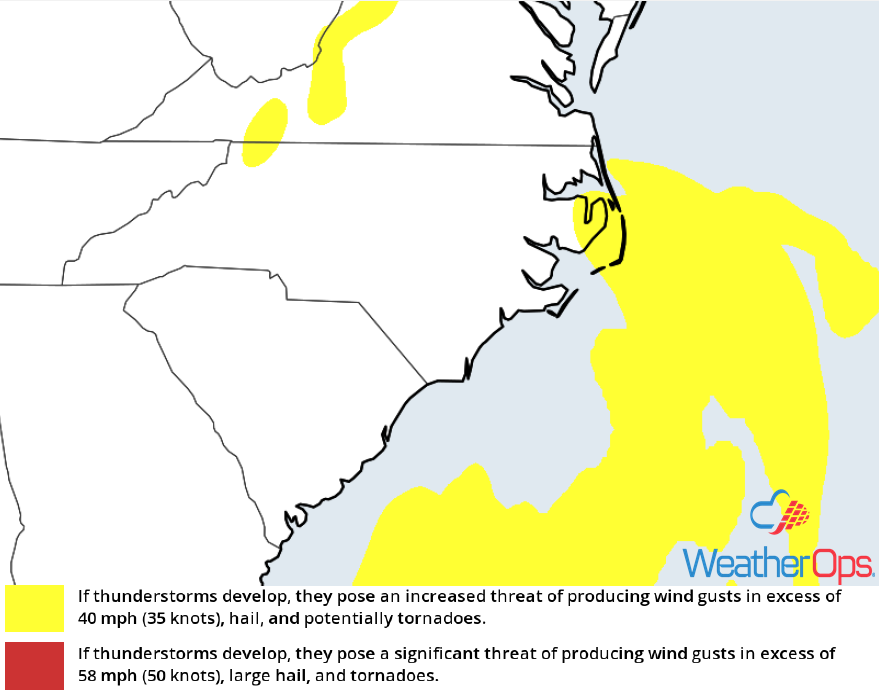 Thunderstorm Risk for Friday and Saturday 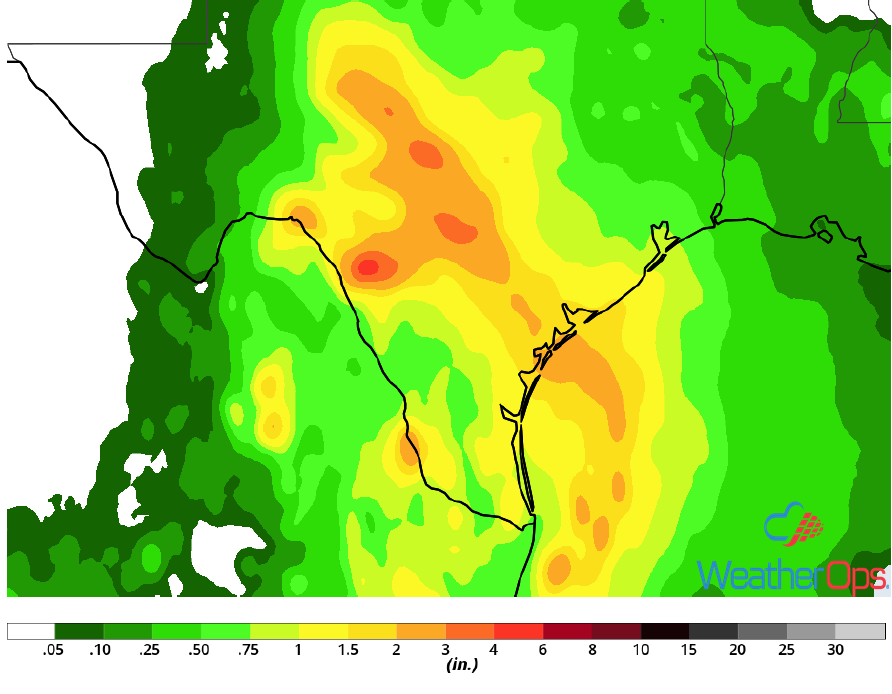 Risk for Thunderstorms across Minnesota on Saturday
There will be a potential for strong thunderstorms Saturday over Northern Minnesota as a warm front moves through the region. Thunderstorms may develop along and north of the front during the afternoon. Strong winds and large hail will be the primary hazards with these storms.

Tropical Update
Hurricane Florence (green oval) is 20 miles southwest of Wilmington, NC and is moving west-southwestward at 3 mph. The center of Florence is forecast to move further inland across extreme southeastern North Carolina and extreme eastern South Carolina today and Saturday. Florence will then generally move northward across the western Carolinas and central Appalachians early next week. Maximum sustained winds are at 80 mph with higher gusts. Gradual weakening is expected later today and tonight. Significant weakening is expected this weekend and early next week as Florence moves further inland.

Tropical Depression Isaac (red oval) is 300 miles southeast of Santo Domingo, Dominican Republic and is moving westward at 16 mph. This general motion is expected to continue over the next few days with a decrease in forward speed. A turn toward the west-northwest is expected next week if Isaac holds together. On the current forecast track, Isaac will move over the eastern and central Caribbean during the next few days.

Tropical Storm Helene (yellow oval) is 655 miles southwest of the Azores and is moving northward at 23 mph. A turn toward the north-northeast is expected Saturday with a turn toward the northeast by late Sunday. On the current forecast track, Helene will pass near or over the Azores late Saturday or Sunday. Maximum sustained winds are at 70 mph with higher gusts. Little change in strength is forecast during the next 24 hours. Afterward, gradual weakening is expected over the weekend.

Tropical Storm Joyce (blue oval) is 1090 miles west-southwest of the Azores and is moving southward at 8 mph. Joyce is forecast to decrease in forward speed and turn eastward by tonight. Over the weekend, it is expected to accelerate northeastward. Maximum sustained winds are near 40 mph with higher gusts. Little change in strength is expected through Saturday. Joyce is expected to become a depression Saturday night or Sunday.

Shower activity in association with an area of low pressure (orange oval) over the western Gulf of Mexico has not become better organized. This system probably will not become a depression before it moves onshore of Texas later today. However, it will likely bring heavy rainfall and gusty winds across portions of northeastern Mexico and Texas through Saturday.

A Look Ahead
By late Monday, rainfall associated with Florence will move into portions of the Northeast. This activity will continue to move northeastward through early Wednesday. Elsewhere, thunderstorms may develop across portions of the Northern Plains and Upper Midwest on Monday and continue through Wednesday. By Thursday, showers and thunderstorms will extend from the Great Lakes into the Central Plains.