Freezing rain and snow is expected from the Southern Plains into the Ozarks Friday and Saturday as an area of low pressure moves through the region. Thunderstorms are forecast along the Texas coast in association with the same area of low pressure described above. Some of these thunderstorms may produce excessive rainfall from Southeast Texas into the Arklatex. Elevated winds and seas, as well as thunderstorms, are forecast across portions of the Gulf of Mexico through Monday morning as a cold front moves eastward.

Freezing Rain and Snow from the Southern Plains into the Ozarks through Saturday
The winter weather event across the Southern Plains into the Ozarks has seen major changes since yesterday, particularly for parts of Oklahoma. Snow and icing amounts have decreased due to the area of low pressure expected to produce this activity moving further south, however, high snowfall amounts remain likely over the Texas Panhandle and the Ozarks. The heaviest snowfall is expected across the Texas Panhandle and northern Arkansas. Accumulations of 3-6 inches with locally higher amounts in excess of 8 inches are forecast. Further south, up to a quarter inch of ice is expected.

Thunderstorms Friday for the Texas Coast
The area of low pressure described above will move southeastward across Texas today, bringing the risk for severe weather to the coast. Weak and isolated supercell thunderstorms could develop, allowing for the potential for strong wind gusts and isolated tornadoes. 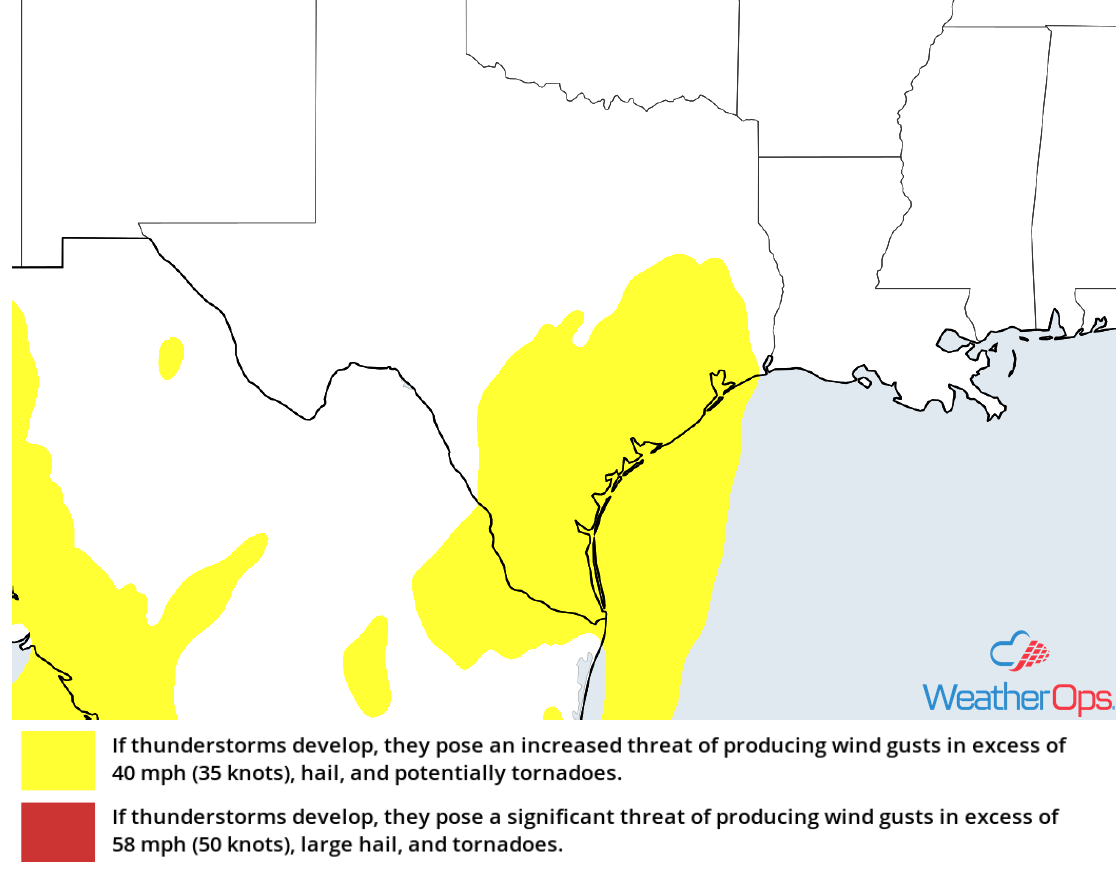 Excessive Rainfall from Southeast Texas into the Arklatex on Friday
In addition to the severe weather potential described above, there will be the potential for excessive rainfall. Rainfall totals of 1-3 inches with locally heavier amounts in excess of 4 inches are expected. The heaviest rainfall are expected from San Antonio into the Arklatex as a result of training thunderstorms. Widespread flooding and flash flooding are likely.

Elevated Winds and Seas through Monday Morning for the Gulf of Mexico
A strong cold front will move through the western Gulf of Mexico late Friday. Ahead of the front, winds will be south-southeasterly to south-southwesterly at 20-30 knots. Behind the front, winds will be 20-30 knots with gusts in excess of 35 knots. Seas will range 8-11 feet ahead of the front and 5-8 feet after the front passes. Thunderstorms are expected to develop along and ahead of the front. Wind gusts in excess of 45 knots will be the primary hazard with these storms. 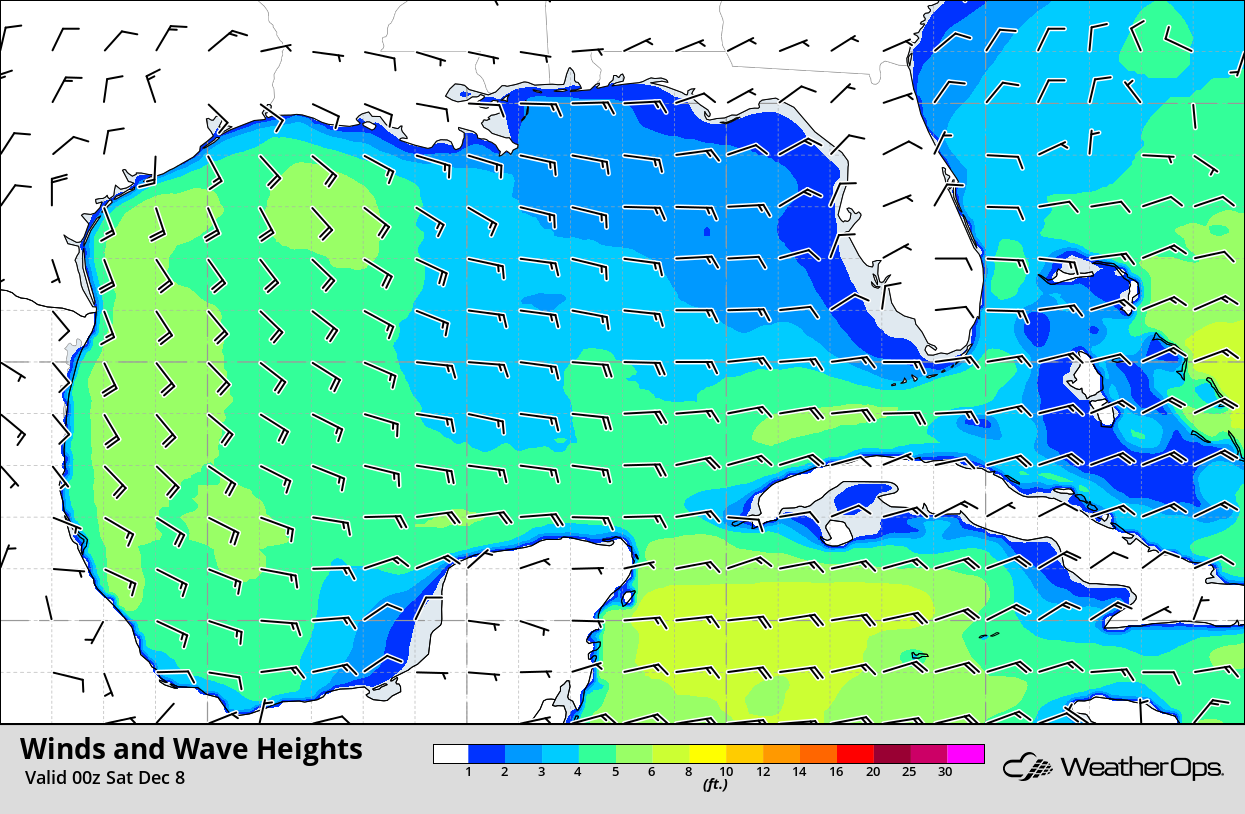 Significant Winter Weather from the Tennessee Valley through the Mid Atlantic Saturday through Monday
A significant winter weather event is expected for the Tennessee Valley through the Mid Atlantic beginning Saturday and continuing through Monday. Heavy snowfall is forecast, particularly across the Appalachians. Accumulations in excess of a foot are expected in the higher elevations. Lower elevations could see 2-4 inches with locally higher amounts in excess of 6 inches. Precipitation across the lower elevations should begin as rain and then transition to wintry precipitation, allowing for some freezing rain accumulation. Accumulations in excess of a quarter of an inch are expected. 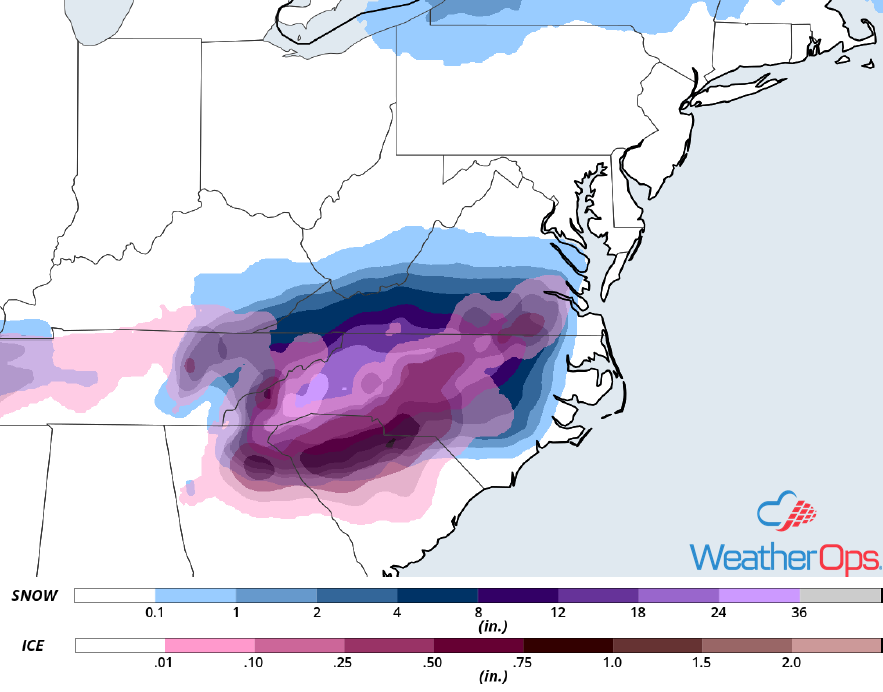 Potential for Thunderstorms Saturday for the Gulf Coast
Widespread showers and thunderstorms will shift eastward on Saturday as an area of low pressure moves along the Gulf Coast. Some of these thunderstorms could be strong to severe; a few may be supercells. Large hail, damaging winds, and tornadoes will all be potential hazards with these storms.

Excessive Rainfall for the Gulf Coast States on Saturday
The thunderstorm activity described above will have the potential to produce excessive rainfall. Rainfall totals will range 1-2 inches with locally higher amounts in excess of 3 inches. The heaviest rainfall totals will be along the coast and into Mississippi. Widespread flooding and localized flash flooding is expected. 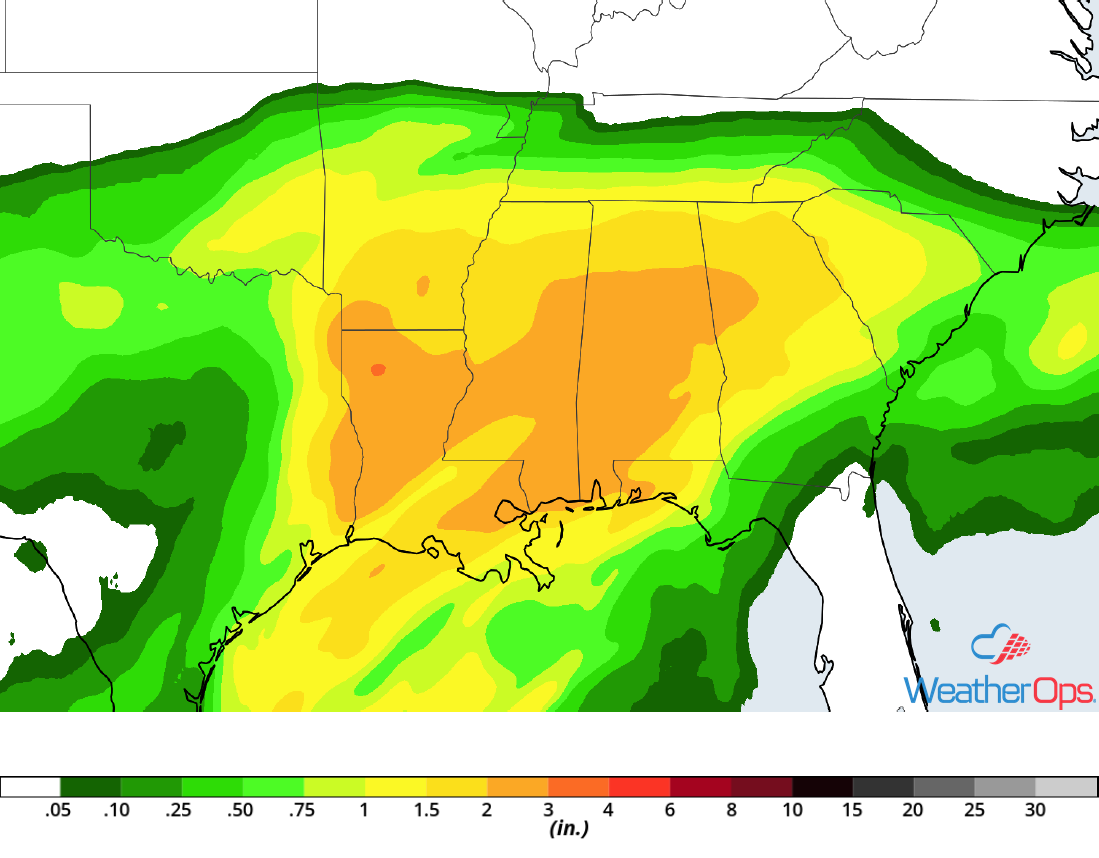