Hurricane Harvey will begin to impact the western Gulf Coast on Friday, bringing strong winds, widespread and dangerous flooding, and dangerous storm surge. Thunderstorms may develop across the Northern Plains on Friday as an area of low pressure tracks through the region. Moisture from Invest 92L will bring a risk for excessive rainfall to parts of Florida on Friday.

Hurricane Harvey to Impact the Western Gulf Coast Friday through Sunday
Hurricane Harvey will make landfall near Corpus Christi, Texas late Friday night or early Saturday morning as a Category 3 hurricane. Along the far southern Texas coast, 15-25 foot seas are expected. After landfall, Harvey will become nearly stationary near or northwest of Corpus Christi. As a result, a prolonged period of tropical storm force winds and squalls that could extend through Saturday night is likely. Winds just offshore the Texas coast are forecast between 95-110 knots with gusts in excess of 120 knots. In addition, significant wave heights of 25-35 feet are expected prior to Harvey moving inland. Along the Upper Texas coast, seas of 10-20 feet are expected near the shore with seas 15-30 feet in the deeper waters. In addition, there will also be a low threat for waterspouts. Further east along the coast of Louisiana, winds will range 20-30 knots with gusts in excess of 35 knots through early Saturday evening. In addition, seas of 10-18 feet, squalls, and heavy rain are forecast. In the far eastern portions of the region, seas of 6-9 feet and winds of 15-20 knots with gusts in excess of 25 knots are expected. Rainfall totals will range 5-15 inches in far south Texas and the Texas Hill Country. Across the middle and Upper Texas Coast, rainfall totals could range 15-25 inches with locally higher amounts in excess of 35 inches. 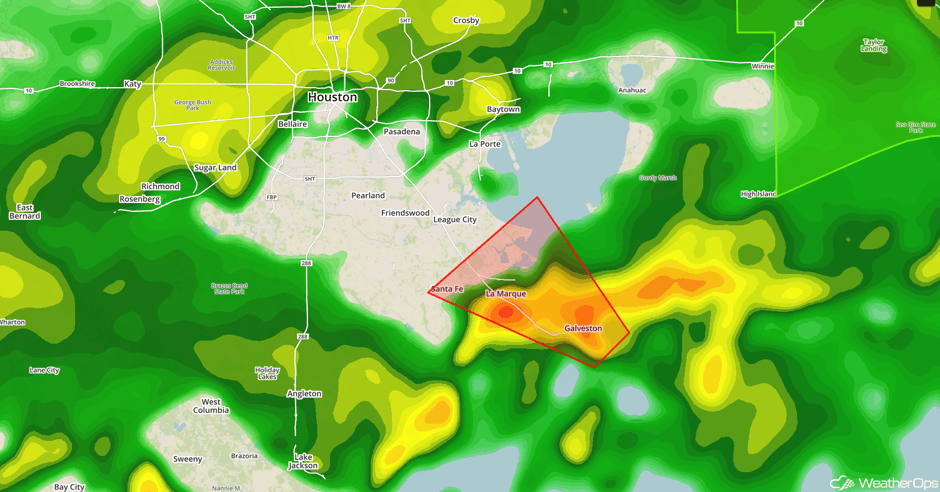 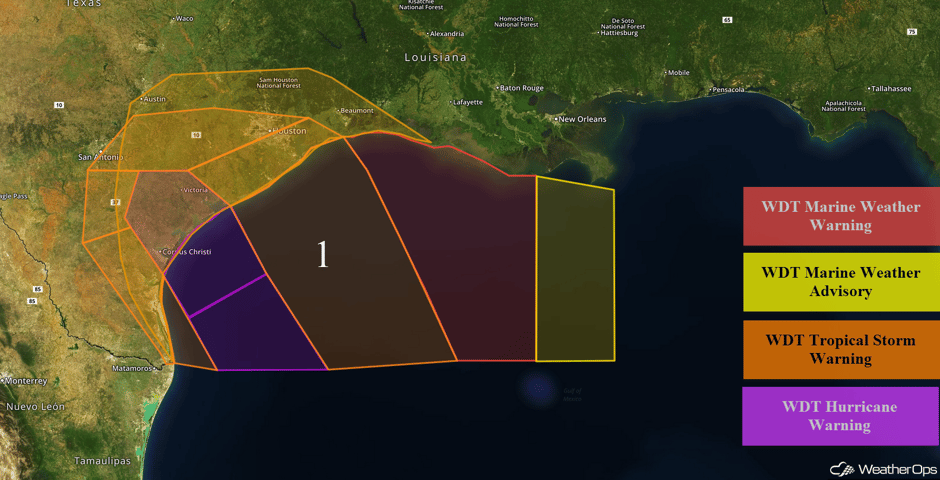 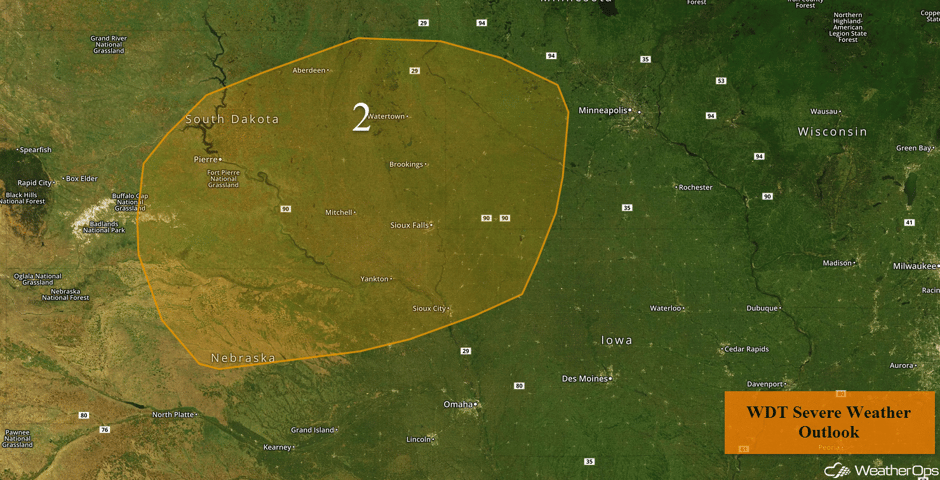 Excessive Rainfall Potential Friday for Southern Florida
There is a risk of excessive rainfall leading to areas of flooding across south Florida on Friday. Ample amounts of tropical moisture is in place as Invest 92L lingers across the region. Widespread showers and thunderstorms are forecast to impact the region much of the day into the evening, producing very heavy rainfall. There will be a flash flooding risk for those areas receiving multiple rounds of storms. Rainfall totals of 2-3 inches with locally heavier amounts in excess of 5 inches are expected. 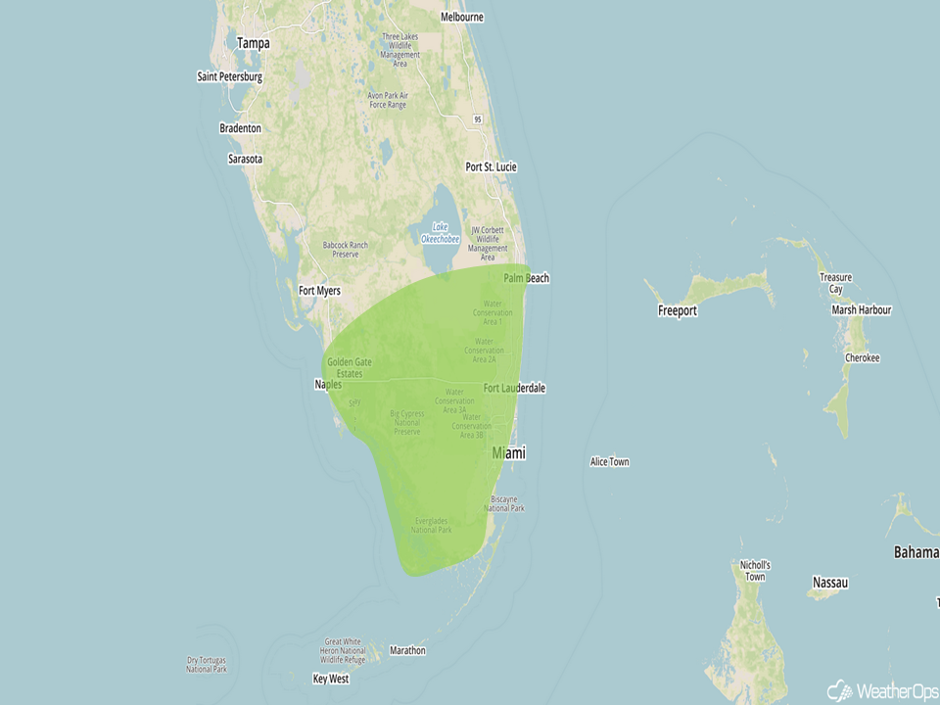 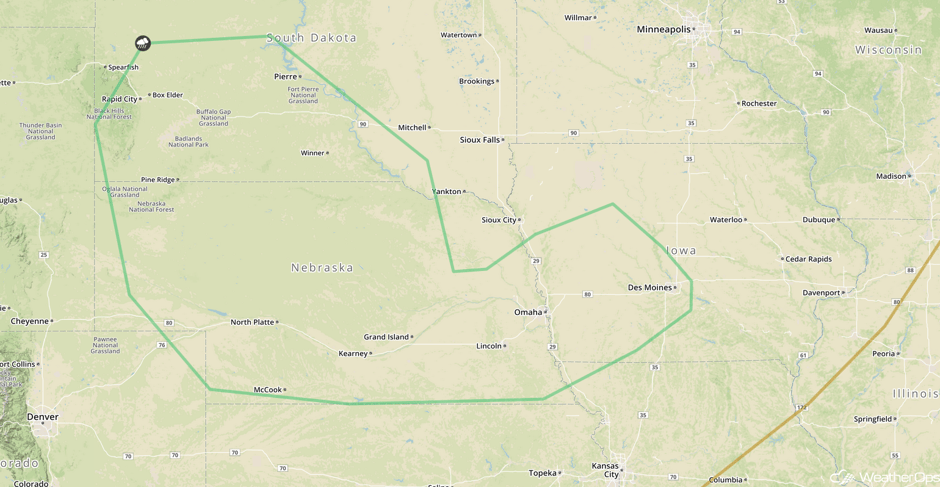 Thunderstorms for Portions of the Midwest on Sunday
Scattered strong storms may develop during the afternoon hours across the Midwest on Sunday. An area of low pressure will track into the Great Lakes region with an attendant cold front being the focus for the development of thunderstorms. Strong winds and hail will be the primary hazards with any storms that develop. Tropical Update
As of 10am, Hurricane Harvey (green oval) is 115 miles southeast of Corpus Christi, TX and is moving northwestward at 10 miles per hour. Harvey's forward speed is expected to decrease significantly during the next several hours. On the current forecast track, Harvey will make landfall on the middle Texas coast tonight or early Saturday. After landfall, Harvey is likely to meander inland. Maximum sustained winds are at 110 mph with higher gusts and some strengthening is forecast. Harvey is expected to become a major hurricane before it reaches the middle Texas coast. Rainfall amounts of 15-25 inches with locally heavier amounts in excess of 35 inches are expected for the Middle and Upper Texas coasts. From the Texas Hill Country to southwestern and central Louisiana, 5-15 inches of rain are forecast. This amount of rainfall will cause catastrophic and life threatening flooding. Dangerous storm surge can also be expected with surge as high as 12 feet in some places. Other potential hazards include dangerous surf and tornadoes.

Elsewhere, an area of low pressure (red oval) from the eastern Gulf of Mexico to central Florida is producing a disorganized area of cloudiness and thunderstorms. Although strong upper level winds could limit development, some subtropical development is possible over the weekend and early next week. Regardless of development, very heavy rain and flooding may occur over central and southern Florida over the next few days. 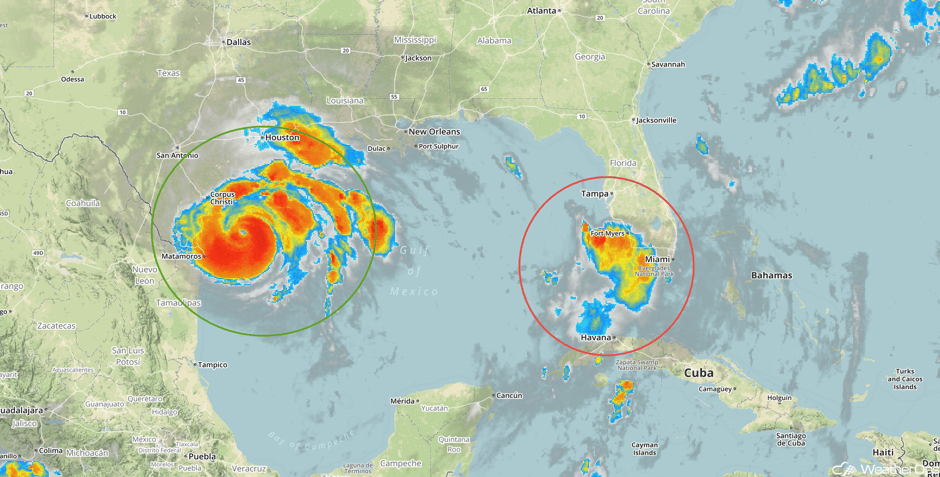 A Look Ahead
Widespread heavy rain will continue for portions of east Texas and southern Louisiana through Tuesday. By Monday, the flooding threat will move into Southern Louisiana. The highest rainfall totals will likely be from Corpus Christi, Texas to Houston, Texas where 15-25 inches and locally higher amounts in excess of 30 inches are forecast. Elsewhere, over a foot of rain is expected. Devastating flooding is expected in these areas.