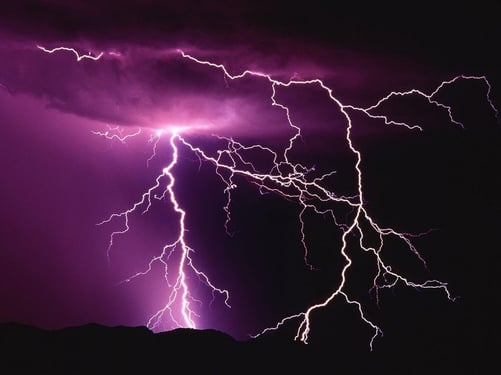 In the United States each year, there are between 20 and 25 million cloud-to-ground lightning strikes. While lightning can be fascinating to watch, it is extremely dangerous. Based on data for the last 30 years (1984 to 2013), lightning has killed more than 1500 people in the United States, an average of 51 people per year based on documented cases.  In addition, during this same period, lightning has injured an estimated 15,000 people, some left with life-long neurological damage.

In addition to the deaths and injuries, lightning causes considerable damage across the nation.  Each year, lightning is the cause of about 25,000 fires, including about 4400 house fires, 1800 other structural fires, and numerous forest fires.  Those fires are responsible for an additional estimated 12 deaths per year.  All totaled, lightning causes nearly $1 billion in damages each year.

During the next several days, we'll provide additional information on lightning and lightning safety.  We'll cover what you can do to protect yourself from this dangerous killer.  Most importantly, we want you to remember that there is no safe place outside during a thunderstorm.  WHEN THUNDER ROARS...GO INDOORS!