It’s Getting Really Hot Outside, So Let’s Talk About Ice!

I don’t like hot summer weather, and so while there is widespread hot weather, and even record heat in places, I’m going to write about ice. Specifically, ice cover in the Arctic Ocean right now. The warming trend over recent decades has resulted in a steady decline in summer sea-ice in the Arctic Ocean, and this year is no different. The following map and graph show current ice extent in relation to the 30-year average used as a normal baseline.

We can also use a tool on the National Snow and Ice Data Center website here to look at individual years:

I made a plot utilizing that tool showing all the years from the 1980s and the 2010s to help illustrate the changes during that time. You can see that the minimum extent of ice in summer is generally between 2-4 million square kilometers less in the 2010s than in the 1980s. 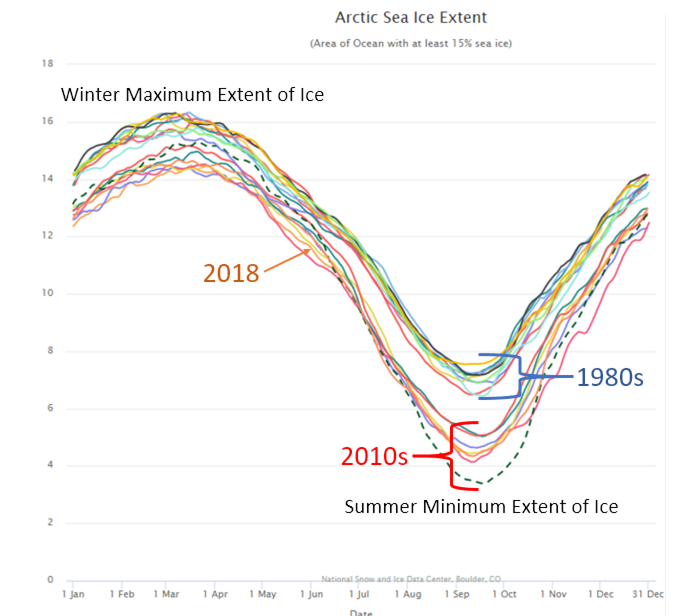 The final data for June isn’t out yet, but the trend graphic showing only May ice extent by year shows a similar downward trend:

With less sea ice in place across the Arctic, air temperatures are running warmer across that region during both summer and winter. The ice reflects much of the incoming sunlight, whereas open sea water does not reflect nearly as much light. The sea water then warms, which both helps to heat the air further across the Arctic and also adds more moisture to the atmosphere across the region. In recent years this has tended to result in more snowfall across Siberia and sometimes Canada during the fall season, and some research has shown that open water across portions of the Arctic Ocean can influence atmospheric patterns during the winter season, as can the rate at which snowfall accumulates across the high latitudes during fall.

It remains to be seen how much ice will melt during the remainder of the summer season as that will depend on how cloudy or sunny the balance of summer is across the Arctic, wind patterns, and whether any significant storm systems move up into the Arctic which can help break up ice faster. But, along with El Niño and other factors this year, the sea ice trends will be something we will be watching as we begin looking at how weather patterns may evolve this upcoming fall and winter season.