In 1967, the Beatle’s Paul McCartney wrote an epic song that was well ahead of its time, “Helter Skelter”. In the song, McCartney (and others that covered the song in later years) wails “Do you, don’t you want me to love you?” As it turns out, this is an apt metaphor for the current weather-climate situation. In some sense, the atmosphere is screaming to the ocean: “Do you, don’t you want me to couple?” Given the impressively warm sea-surface temperatures spanning much of the central-eastern equatorial Pacific Ocean, what’s the problem? The problem, as we’ll discuss below, is climate change.

While not likely to be as strong as the Super El Niño events of 1982-83 and 1997-98, the current event is nonetheless quite robust. However, it is happening during a period of a changing climate. In fact, it appears that El Niño (warm phase of El Niño Southern Oscillation (ENSO)) could be amplifying the warming of the global mean temperature to record levels. For instance, see the recent WMO article. As discussed below, this combination of a strong El Niño and climate change could be contributing to an unprecedented circulation response.

The purpose of this article is to make an effort to illustrate circulation impacts due to climate change, and give some high-level observational evidence of a La Niña-like response due to global warming, including at present. From another perspective, the ongoing El Niño could be contributing to La Niña aspects of the current atmospheric circulation given that it may be amplifying the present increase in the global mean temperature. Emphasis is then placed on the relevancy of climate change to subseasonal forecasting, including the present 16-30 day outlooks issued by WDT. The “global warming-La Niña” connection has been gaining some recognition in a few very recent publications in the refereed literature, as well as in on-line blogs written by well-respected scientists. The reader is encouraged to do a search.

No attempt will be made to get into the complicated issues of the causes of climate change (including global warming) other than described above (see IPCC - Intergovernmental Panel on Climate Change web site for details). Also, the terms “global warming” and “climate change” will be used interchangeably for simplicity even though the former is part of the latter. 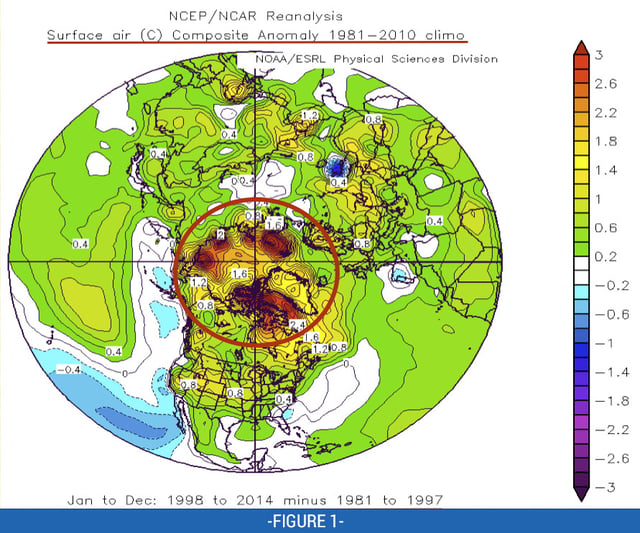 Figure 1 presents a Northern Hemispheric polar stereographic view of the changes in the global mean temperatures since the 1997-98 when compared to the same numbers of years prior (17). There has been some past discussions of a “jump” in global warming during the 1997-98 El Niño, and that is why that ENSO event is used as a “separator”. Issues regarding a putative 15-year hiatus of global warming understood since the 1997-98 El Niño, as seen from Fig. 1, the rise in temperatures across the Northern Hemisphere is quite pronounced, especially over the polar latitudes (red oval). The latter includes the reduction in Arctic sea ice, and has recently been termed “Arctic Amplification”. More generally, the rise in global mean surface temperatures has been more pronounced across the Northern Hemisphere than in the Southern Hemisphere (not shown). 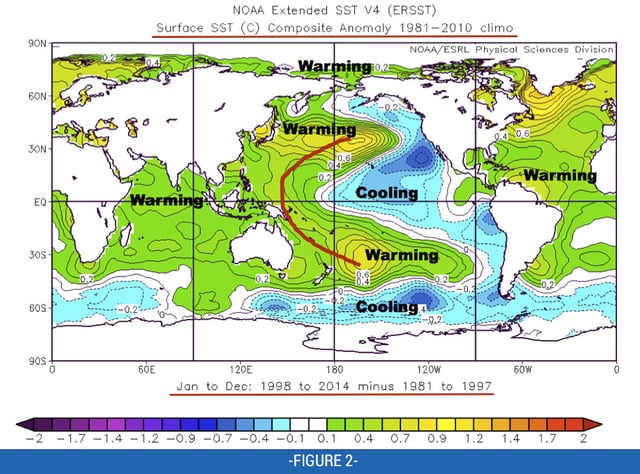 Figure 2 shows the result of the same exercise done for global sea surface temperatures (SSTs). Observe the warming especially across the tropical ocean basins EXCEPT for the central and eastern equatorial Pacific Ocean. The latter has been viewed as a possible negative feedback to global warming, since it is a La Niña SST imprint (likely circulation driven). 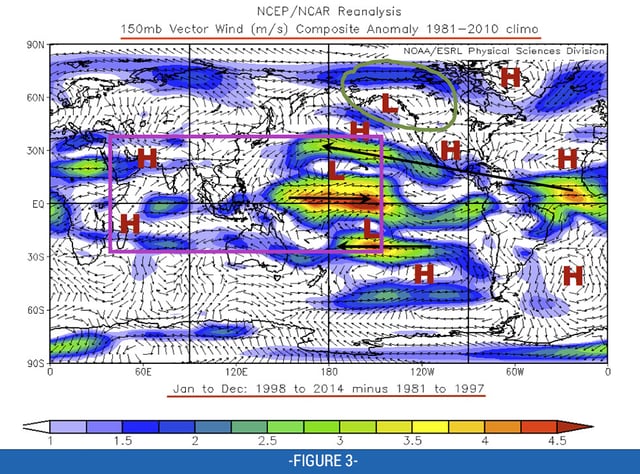 Figure 3 is the same as Fig. 2 but for 150mb vector wind anomalies. There are two takeaways: 1) a wave 0-1 pattern in the tropics including twin anticyclones across the Indian Ocean with pronounced troughs around the dateline (purple box), and 2) a cyclonic gyre extending from the Gulf of Alaska into the Pacific Northwest (green oval and “L”, for cyclonic anomaly). As seen by the interhemispheric symmetry of circulation anomalies east of the dateline (“H” means anticyclonic), there is a clear signal of tropical-extratropical interactions. By construction, figures 2 and 3 show a residual of SST and circulation anomalies associated with the climate trend since 1997-98. Going one step further, given that circulation anomalies in the tropics are baroclinic, anomalously strong trade winds will be present along the equatorial dateline leading to the SST cooling shown in Fig. 2. 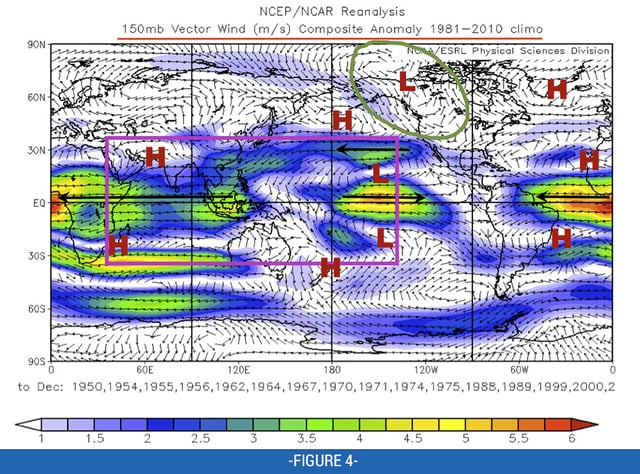 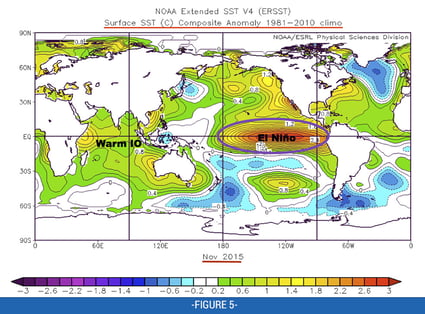 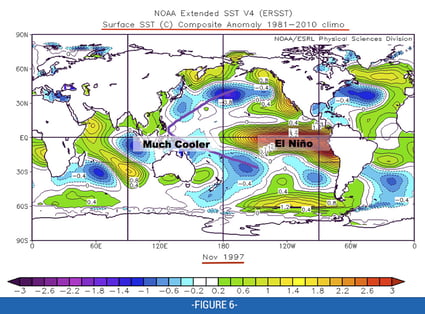 Figure 5 gives a plot of global SST anomalies for November 2015. The strong basin-wide El Niño is evident (purple oval). However, the anomalously warm Indian ocean and the lack of a surrounding “cold horseshoe” is not. Figure 6 is the same as Fig. 5 but for 1997. Case limitations and so forth understood, observe: 1) positive SST anomalies are larger east of the dateline during November 1997 (and the subsurface was much warmer – deeper thermocline), 2) the presence of a “cold horseshoe” (purple line), and 3) cooler Indian Ocean SST anomalies (positive Indian Ocean Dipole – consistent with El Niño). An open question is, “would the ongoing 2015-16 El Niño be stronger without global warming?” Later posts on this blog may offer some thoughts to the latter, which is only one of countless major research issues involving climate change and ENSO. 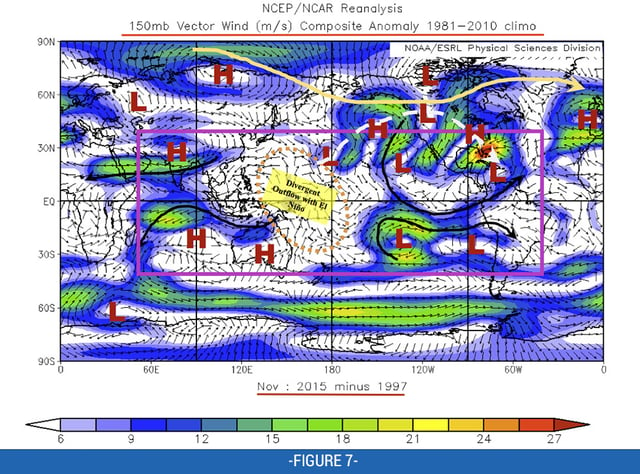 At this point, an attempt is made to tie all of the above issues to the current weather-climate situation, including how it affects WDT’s 16-30 outlooks going forward. Figure 7 shows a 150mb vector wind anomaly global wind plot where a simple subtraction has been done between the Novembers of 2015 and 1997 (2015 minus 1997). Again, this is only one case. However, there is some similarity to Fig. 4, with the notable exception of the twin subtropical troughs being displaced farther east (purple box). There is evidence of divergent outflows west of the Dateline, presumably associated with El Niño-related tropical forcing, but still farther west than the composite El Niño signal. Downstream over the East Pacific, note the residual twin troughs – acting against the El Niño base state there. In any case, it is reasonable to speculate that Figure 7 shows a La Niña-like residual global mean circulation, perturbed by the El Niño anomaly.

Other features from Fig. 7 include a residual of a northeast-southwest (NE-SW) tilted wavetrain arcing across North America supportive of a nationally warm pattern (dashed light gray arrow), and a contracted polar vortex (yellow arrow). The NE-SW tilt of the eddies along the wave train is supportive for fluxing global relative angular momentum poleward, and a contracted polar vortex is not favorable for the deliveries of Arctic airmasses into the lower 48 states. Collectively all of these attributes are consistent with a La Niña base state.

The right panel of Fig. 8 shows the trend in two-meter air temperature anomalies for the 17 years before and after the 1997-98 El Niño. There is substantial warmth centered across the northcentral states extending into Canada. The left panel shows the spatial temperature anomaly pattern for November 2015 (notice the difference in the scales). Consistent with the trend, there is anomalous warmth centered across the north-central states extending into Canada, much farther north than the composite signal for strong El Niño. Recalling Fig. 7 that makes sense given the synoptic pattern of anomalous southerly flow across the central states with a contracted polar vortex. However, the belows centered on Nevada is consistent with El Niño.

Take home messages from all the above include the following: attributing the recent nationally warm pattern to El Niño alone is incorrect. Global warming is also contributing, and El Niño may only be amplifying it. The circulation response to the latter combination has included numerous characteristics in-line with La Niña, such as the wave train shown in Fig. 7. That wave train is actually a form of “noise” in the weather-climate system we think will be an important consideration for WDT’s 16-30 outlooks going forward. Ramifications include that is it inadvisable to get complacent thinking that the current nationally warm pattern will continue unabated during this winter.