In 2016, Ellicott City, Maryland experienced a major flood when 6 inches of rain fell in two hours. Many buildings damaged in that flood had either recently been repaired or were still in the process when another flash flood hit on Sunday, May 27, when thunderstorms stalled in the area leading to torrential rain.

On Sunday evening, a rare flash flood emergency was issued. Radar estimates were over 8 inches before the storms came to an end.

At 633 PM EDT, catastrophic flash flooding was ongoing in the Ellicott City and Catonsville areas, with many areas seeing over five inches of rain so far. Additional heavy rain is moving into the area again. #mdwx #vawx #ThinkWeather pic.twitter.com/dqLJJAMFjt

MetStorm's rainfall accumulation product from WDT's ArcGIS server shows a maximum of 10 inches of rain fell in total from the storms. 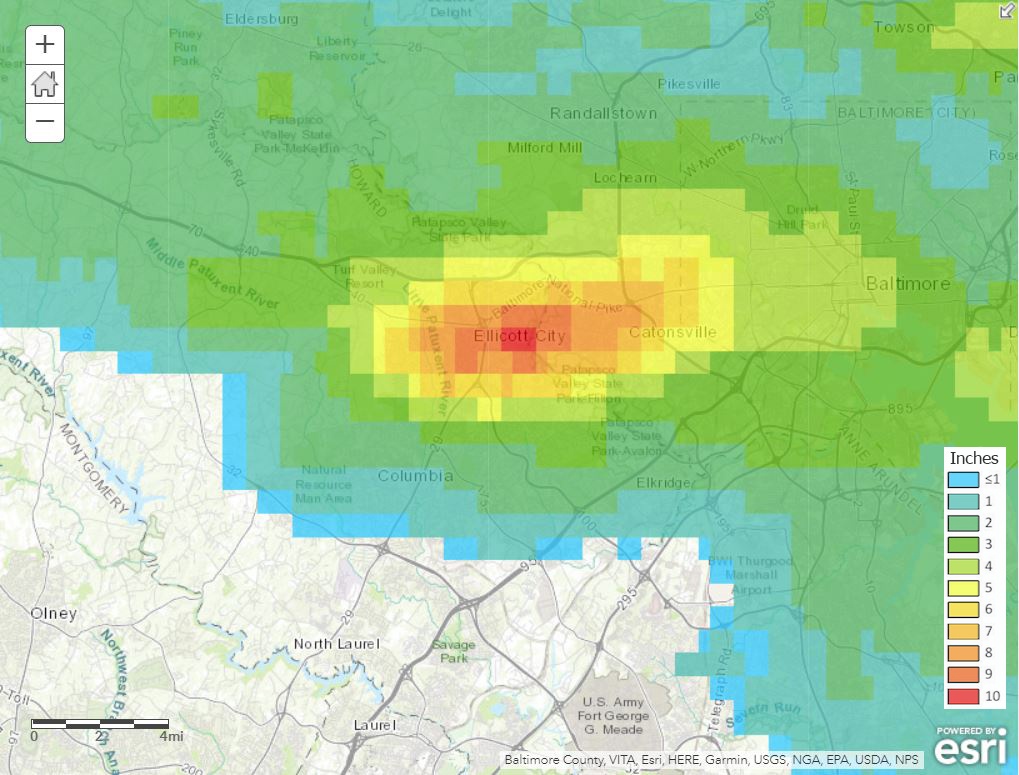 Ellicott City is located in a valley near Patapsco River. This was a multi-role disaster where not only did weather play a part, but so did topography and urban development. Water that once was absorbed into the soil, now encounters roads and concrete parking lots, forcing the water to flow into the town's Main Street.

A wall of water taking over #ellicottcity right now. pic.twitter.com/Zx15gAievG

Search and rescue efforts are ongoing today. There has been one fatality attributed to this disaster. Next will come clean-up and repairs, again.

The town has a long history of flooding. However, while historic floods came from tropical storms that caused the river to rise, the latest, more devastating ones have come from heavy rainfall and runoff.

WDT’s complete GIS offering is available via ESRI Map Services served from our ArcGIS Server infrastructure hosted on Amazon Web Services. Tell your story through interactive mapping technology by using the largest selection of weather layers on the market today.