Cold Air Damming: What It Is and What It Does

Several processes can influence the development and behavior of winter storms. Locations near the windward side of a mountain can sometimes experience an effect known as cold air damming which affects the precipitation type.

When you hear the word "dam," you might think of something that holds water in a lake. Similarly, because cold air is more dense than warm air, it can become trapped along the east side of a mountain under a warm air mass. As a result of warm air on top of cold air, an inversion develops. To the north of this cold air, there can be a ridge of high pressure that forms. Since winds blow clockwise around a high-pressure area, the winds are easterly to the south. The air blowing toward the mountain rises and cools. Eventually, that cold air begins to build on the east side of the terrain; this is known as Cold Air Damming. Cold Air Damming plays a key role in winter storms, especially freezing rain events to the east of the Appalachians, by changing the vertical temperature profile. 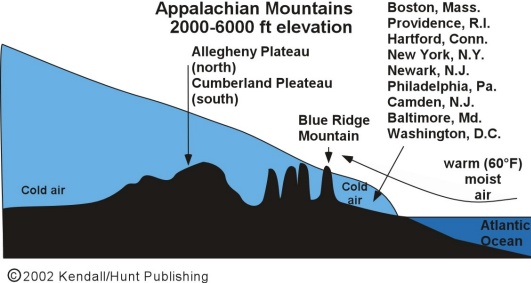 There are five ways the trapped cold air mass can be eroded.

Cold Air Damming can occur at any time of year but is most common during the fall and winter. While it does have effects on precipitation type, it can also lead to decreased visibility and increasing cloud cover. This effect is most pronounced in the Appalachians, but can also be observed east of the Rockies and Cascades.