Hurricane Irene – The biggest impacts are not going to be winds.

As I write this on Friday afternoon, Hurricane Irene is a Category 2 Hurricane aimed directly at Cape Hatteras, North Carolina. After Irene pummels North Carolina, she will move up the Eastern Seaboard almost paralleling the coast. When Irene gets to the North East it will cause havoc in some of our biggest cities. By that time Irene will “only” be a Cat 1 Hurricane or Tropical Storm, but winds will still be very strong (60-90 mph). It is likely that the biggest impacts will be from storm surges and large waves in some of the most important waterways in the North East, including Chesapeake Bay, Delaware Bay, and the waterways in Atlantic City and New York City. 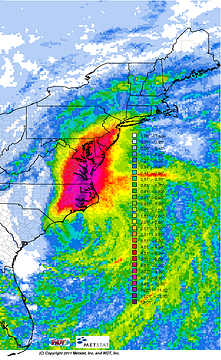 Additionally, 10 inches or more rain will fall in some areas on top of already wet ground. This will cause significant flash flooding. WDT has partnered with Metstat to produce a new product, the Forecast Potential Flood Index, just launched today in beta mode. By combining the forecast rainfall amounts with regional climatological values, we can actually characterize the amount of rain expected in terms of how “rare” it is to get such amounts. This makes it much easier to ascertain potential impacts such as flooding than using simple amounts, since what is deemed heavy rain in one part of the country may be typical in another. The attached graphics show the forecasted rainfall amounts from WDT’s advanced, high-resolution numerical weather

"ARI" How Often This Occurs

prediction model along with the Forecast Potential Flood Index derived from those values. The first graphic shows the rainfall expected for the 24 hour period ending Sunday morning, and the second shows the 24 hour period ending Monday morning. This forecast suggests that some portions of New York state will see rainfall amounts that typically only occur once every 500-1000 years!

There is also deep concern that in areas where there has been significant rainfall in the past few weeks plus the additional rainfall from Irene, that tree root systems will not hold up to strong winds, so a big issue will be toppling trees which will lead to widespread power outages.

WDT has recently signed an Agreement with the National Hurricane Center where we are working with them to distribute real-time video from experts at the NHC on an hourly basis during the period leading up to landfalling hurricanes. These experts are describing the latest thinking on Hurricane Irene and updating you every hour. We have these videos on 600+ websites. To find a local media site that is carrying these videos, please go to www.imaphurricane.info or go to http://www.imapweather.com