April Showers? Not in Oklahoma!

Everyone has heard the saying: "April showers bring May flowers." What if those showers are torrential downpours with hail and high winds? Yeah, flowers don't really like that and such is the life of plants when Oklahoma severe weather strikes.

Morning severe storms traveled across Oklahoma all night with wave after wave coming through with hail, lightning, flooding, and strong winds. You can see one of the more intense bands in central Oklahoma in the below RadarScope reflectivity image.

Curious what that radar feature looks like in person? Besides getting dark enough to where you think it is evening, the leading edge came through in an impressive and slightly turbulent fashion. It was quickly followed by strong winds and then a lot of heavy rain at WDT's headquarters in Norman, Oklahoma.

These winds caused additional issues in Oklahoma City where a string of power poles went down along a major road leading to traffic issues. Thousands were also without power in the state as the storms rolled through causing damage.

TAC 4: Avoid N. May Ave. btn. 63rd and Wilshire. This will be an extended operation. No injuries. pic.twitter.com/fGdZAUU66b

Heavy rain was another issue. North-central Oklahoma had storms overnight and into the very early morning hours along with the line that came through Norman. This lead to flash flooding, road closures, and water rescues as people drove into flooded streets. Some parts of the state received over 3-inches of rain officially. 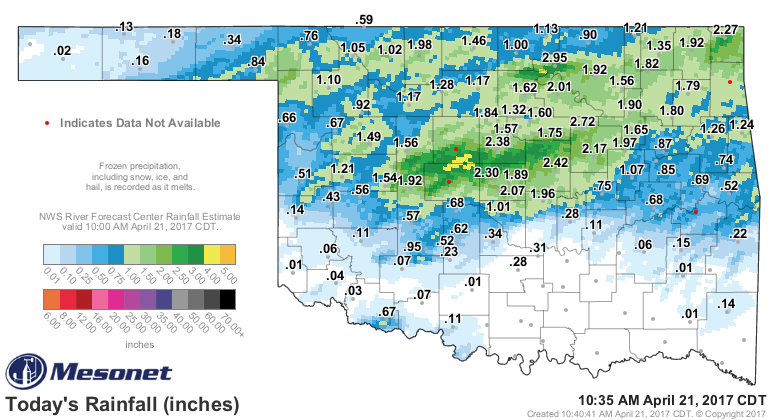 When that much rain falls in such a short time, big problems occur. Multiple buildings had flooding issues as seen in this tweet from the State Capitol.

Why you don't drive into water over the roads. 4 vehicles stranded in Edmond, OK this morning at Danforth and Western. #okwx @koconews pic.twitter.com/TiMXV9aKZj

Are you prepared for what spring holds? Do you have the right tools to deal with severe weather? Find out the 5 reasons you may need a professional weather service.