Have you ever seen a cloud that was just so interesting that you wondered if it was really a cloud? Could it possibly be an alien invasion you are seeing instead? Some meteorological phenomena is so amazing looking that people can't help but take photos and question its authenticity.

Last week, the photo above was taken at a baseball game in Florida between the Braves and the Astros. Stories headlined that the apocalypse was coming while others though it closely resembled the storm in Independence Day that proceeded the arrival of alien spacecraft.

What people were actually viewing was a gust front, which is a type of arcus cloud. When you see something like this, you need to head inside as fast as possible. This signifies the leading edge of a thunderstorm. The wind is about to increase significantly, the temperature will drop, and heavy rain, lightning and possibly hail will soon follow. 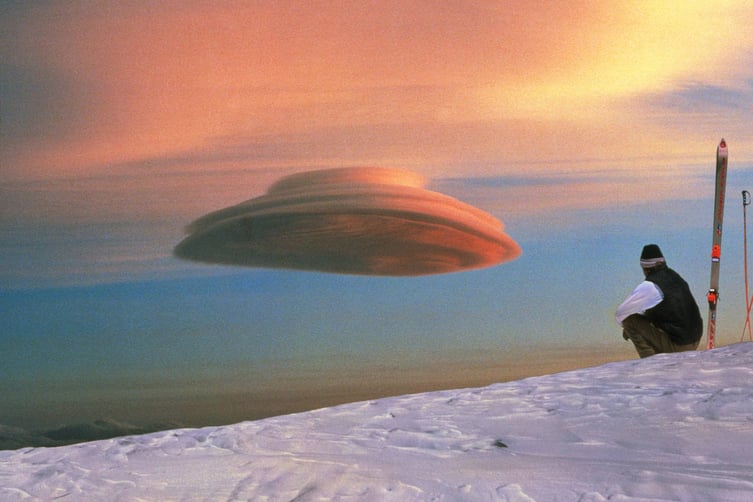 Now, this is a very interesting picture! I bet that skier is wondering if he should be reporting a UFO. The smooth edges and disc appearance are definitely eye catching and unusual. Look how closely it resembles the image below.

This was not an alien spacecraft either. What you are viewing is a lenticular cloud, also known as Altocumulus lenticularis. This stationary lens-shaped cloud usually forms over or near mountains when stable air is disrupted into eddies. With enough moisture, a cloud can form that is smooth with multiple layers.

Large, explosive clouds begin to form where there was just a blue sky. What are you viewing? Is this cloud cover for multiple alien spaceships? It sure resembles the storm from Close Encounters of the Third Kind that formed around Devils Tower. In the movie, soon after this formation, a very large UFO comes out of the cloud. Is that about to happen in the above photo?

If you guessed Alien Invasion, you would have been wrong. This is a type cumulus cloud. There are many forms of them ranging from small puffy clouds (cumulus humilis) to very large, tall ones that can contain severe weather (cumulonimbus). Cumulus clouds have flat bases and can signify unstable air.

The atmosphere is a curious place. With just the right conditions, all types of interesting clouds can form. It should be no suprise that many movies have special effects that mimic weather. This is just a small sampling of the fascinating cloud features that can form. There is no need to think something from outerspace is here, our own Earth can create some pretty spectacular meteorological phenomena.