A Tropical Cyclone in the Mediterranean Sea

Strong wind shear is usually a common occurrence across the Mediterranean Sea much of the year.  For a tropical cyclone to develop or maintain itself, low wind shear is typically needed.  Also, the water temperatures throughout the Mediterranean are not typically warm enough to support a cyclone with fully tropical characteristics like you would see in the Atlantic or Pacific Oceans.  That all being said, if the right combination of conditions are in place across the region, the development of a sub-tropical or hybrid type of cyclone is certainly possible.

Unfortunately, there is no official agency that is responsible for issuing advisories on Mediterranean tropical cyclones. Although this was not officially declared, it was marked as “Invest 90M” for tracking purposes. In the past, the Free University of Berlin has taken the liberty of naming them, with the most recent being “Qendresa” in November 2014. 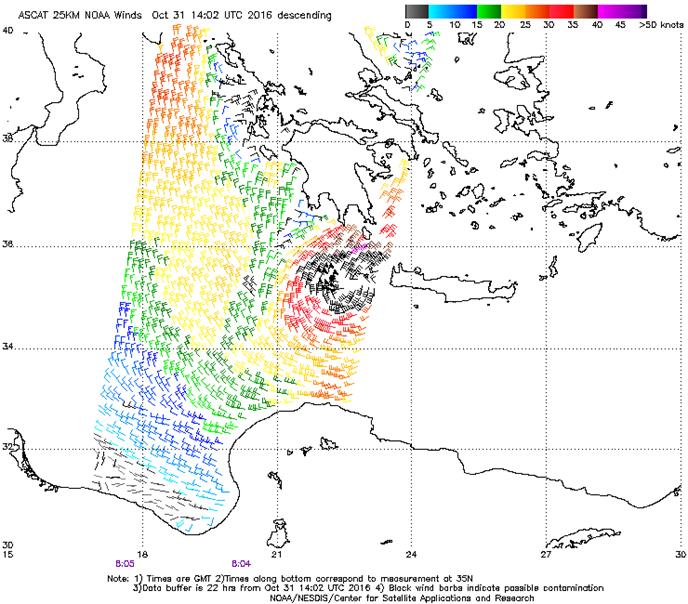 Based on Dvorak analysis (estimating intensity based on infrared and visible satellite imagery) yesterday evening, along with a semi-recent ASCAT wind scatterometer pass (above), it is fairly safe to say that 90M reached Tropical Storm strength at one point.

This morning it is quite evident that the cyclone is weakening given the warming cloud tops.  It also appears that it is merging with a cold front across southern Greece.  Heavy rainfall and some wind gusts up to tropical storm force (34 knots/39 mph) will continue to be possible over the region throughout the remainder of today.