Heavy rain associated with Tropical Storm Bill is expected Tuesday across Eastern Texas. Severe thunderstorms are likely during the afternoon across the Northern Rockies into the Northern Great Plains. 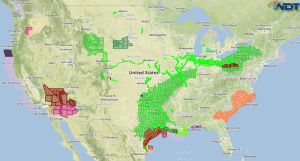 Eastern Texas: Heavy rainfall from Tropical Storm Bill as the tropical storm makes landfall
on Tuesday is forecast across much of eastern Texas. Moderate to heavy rainbands are
forecast across the area with embedded strong to severe thunderstorms. Total additional
accumulation of 3 to 6 inches of rainfall is possible, with locally higher amounts up to 12
inches possible depending on where the heaviest rainbands develop. Flash flooding is a
primary hazard associated across the region due to the extent of the forecast rain as well as
the already saturated ground. In addition to the heavy rainfall, gusty winds in excess of 30
mph will be possible, with 40-50 mph winds closer to the coast as Tropical Storm Bill makes
landfall.

Northern Rockies & Northern Great Plains: Severe thunderstorms are likely Tuesday
afternoon across parts of Wyoming, western South Dakota, and western Nebraska. Low
pressure is forecast to develop across Wyoming and western Nebraska during the day as a
short-wave trough of low pressure aloft quickly moves through the region. With daytime
heating, clusters of thunderstorms are forecast to develop across Wyoming and move
across western South Dakota and western Nebraska by late afternoon and into the evening.
Upper air profiles indicate large hail and damaging winds as the primary hazards associated
with any developing thunderstorm along with frequent lightning and heavy rain.