Mid-Atlantic to southern New England: The forecast for the coastal low pressure system now presents a slightly less intense snowfall than was depicted in the Winter Weather Warnings posted yesterday afternoon and evening, especially southwest of NYC. The Clipper low pressure system is pushing into the central Appalachians at this time, spreading snow across higher elevations of northern WV, western MD, and central PA, while a bit of snow lingers over central OH and some light snow is noted over eastern PA and parts of NJ. This system will gradually wind down through the day, but will continue to produce light to locally moderate snowfall across the Mid-Atlantic. Meanwhile, the coastal low that is expected to bring very heavy snowfall and potentially blizzard conditions to parts of the Northeast and New England is just now forming along the Outer Banks of NC. As this Low moves northeast toward Cape Cod this afternoon and evening, precipitation will gradually spread northward, but remain mostly offshore until around sunset. Moderate to heavy snow is forecast to push into NJ, Long Island, and southern New England during the evening hours, spreading further north and west overnight. Significant travel impacts are quite likely along the I-95 corridor between Philadelphia and Boston.

Elsewhere, a new Low will dive south from central Canada into the Upper Mississippi Valley on Monday, bringing light to moderate snowfall to parts of Minnesota and Wisconsin. Significant snowfall impacts are not expected, as totals should remain in the 1 to 4 inch range. Moisture moving north from Baja California into the Southwest will bring some isolated to scattered rainfall to the region. A few areas of heavy precipitation may cause some localized flooding, but widespread significant impacts are not anticipated. 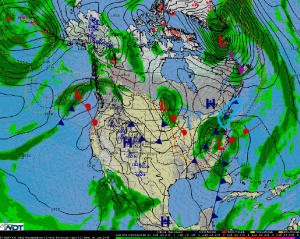