Heavy snow will continue Wednesday for the Mid Atlantic, Interior Northeast, and New England. A rain/snow mix is expected along the coast. Heavy snow is expected in the higher elevations of the Northwestern Rockies and Eastern Montana; moderate snow in the lower elevations. Light to moderate snowfall is possible for the Upper and Mid Mississippi Valley. Heavy rainfall will be possible across parts of Central Florida. 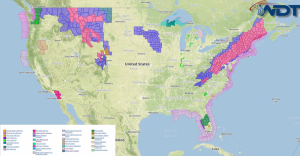 An area of low pressure will continue to track up the East Coast allowing for a significant weather event. Where a rain/snow mix is occurring, a transition to all snow will be likely by late morning or early afternoon. 8-12 inches of snow with 12-15 inches in the higher elevations are expected further inland, but 2-4 inches are expected closer to the coast. Snow will taper off tonight with the heaviest snow across New England.

An area of low pressure advancing through the Mid and Upper Mississippi Valley will allow for light to moderate snowfall across portions of Southern Minnesota and Northern and Central Iowa where 3-5 inches of snow will be possible. Strong winds across the region will allow for blowing and drifting snow, as well as hazardous weather conditions. Lighter amounts and a rain/snow mix will be possible from Southern Iowa into Northern Missouri. 2-4 inches of lake effect snow are expected southeast of Lake Superior.

Heavy rainfall will continue across portions of Central Florida as a frontal boundary continues to advance across the area. 1-2 inches of rain and localized flooding will be possible. 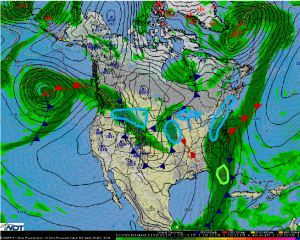