Will You See a White Christmas This Year?

Do you like your holiday season to look like a Winter Wonderland? With Christmas less than two weeks away, we can begin to look at which portions of the country may have a chance to see a white Christmas this year.

First, let's look at the historical odds for a white Christmas. The plot below shows the historical probability of having 1” of snow or more on the ground, the official NOAA definition of a white Christmas.. Note that odds in New York City are less than 25% and less than 50% in Chicago. The regions of the country that usually are very likely to see a white Christmas (>90% odds) are somewhat limited, with only portions of the Upper Midwest, northern areas of New England and the high elevation areas of the West likely to see snow on the ground Christmas morning most years. 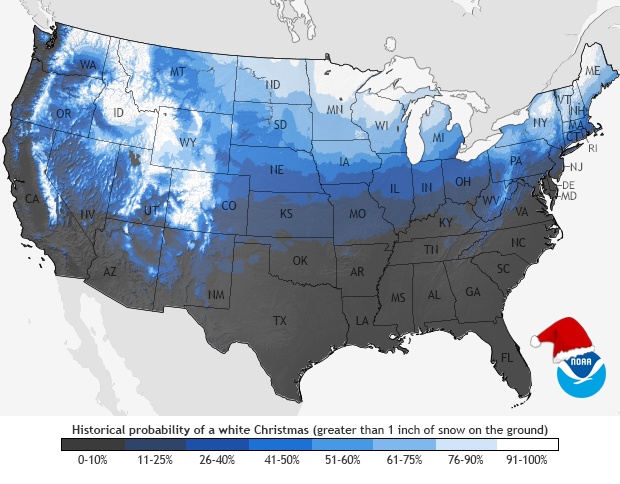 What About Recent Years?

The following composite of plots shows the areas that had snow on the ground Christmas morning for each of the last nine years. As the previous probability map showed, the northern tier of the country is usually snow-covered, but not always, on Christmas Day, with snow cover most likely across high elevation areas of the West. As might be expected, snow cover is a little more consistent across Canada on Christmas. Apart from southeast Ontario and some coastal areas, most parts of Canada see snow on the ground Christmas morning. 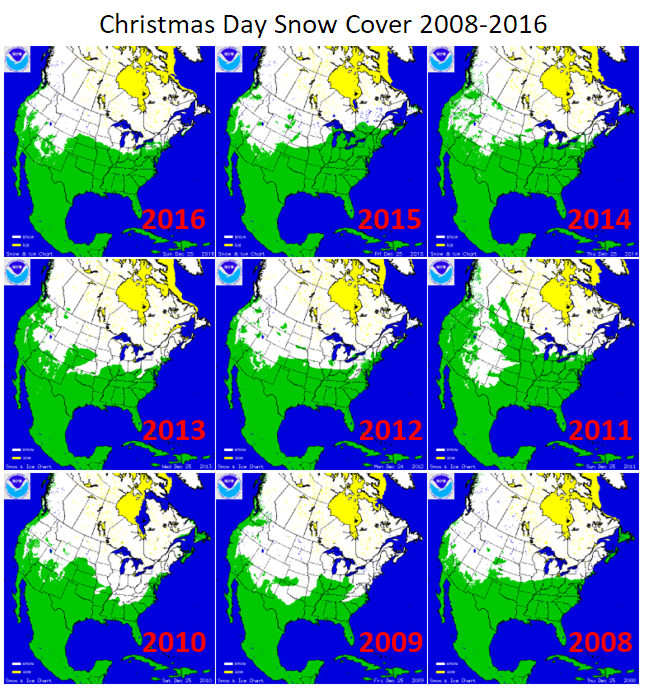 Snowfall totals this season have been somewhat limited in places like Chicago and Des Moines, but unusually heavy across portions of the South. The following plot shows snowfall totals from September 30th-December 13th and shows the unusual snowfall totals seen across southern Texas and the Southeast. 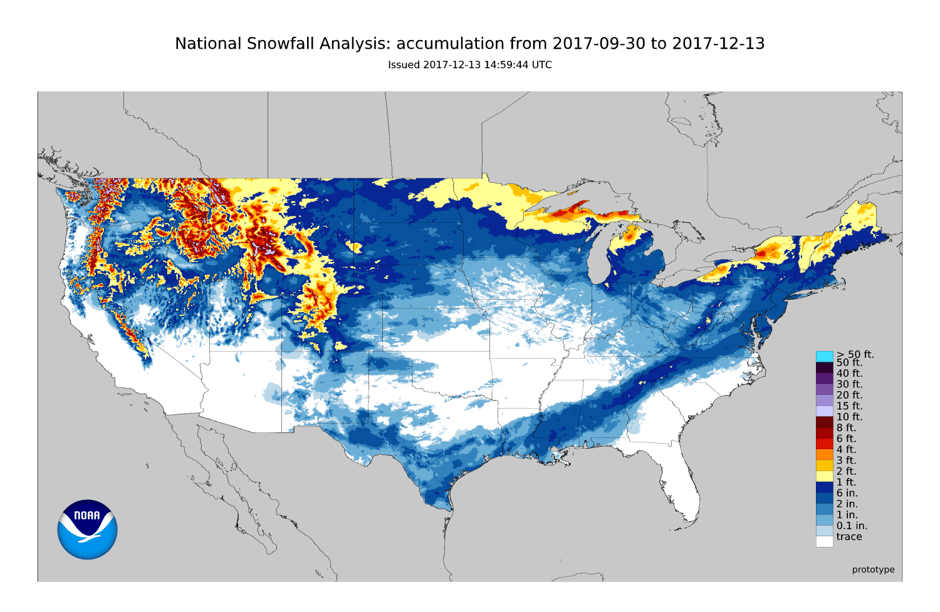 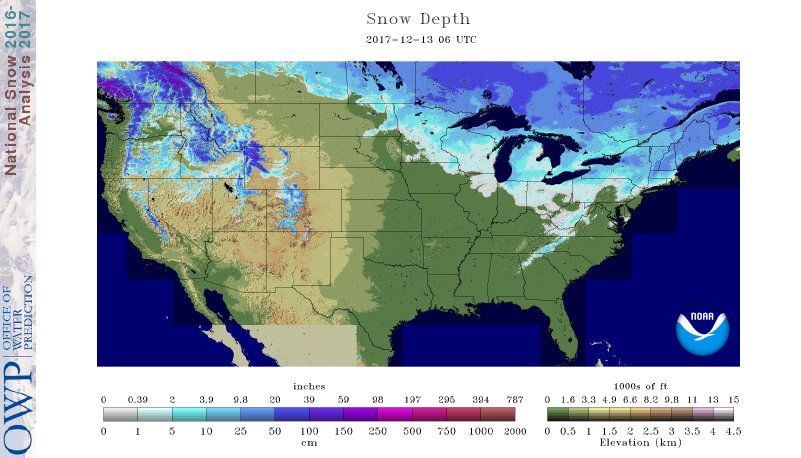 Additional snow is likely across the Great Lakes and Northeast this week though temperatures will also be warming this weekend and early next week and so more melting will take place at that time. The pattern across the country will be trending colder again in the days leading up to Christmas though, and some additional snow could be seen at that time. Unfortunately, it is difficult to pinpoint where snow will fall two weeks out, but the following plot shows the average snowfall from all the ECMWF ensemble members run on December 13, 2017, for the next 15 days. This is an average of 50+ model runs, and so this should not be taken as an actual snowfall forecast, but rather as a guide to where there is a chance for snow to fall. Anywhere showing an inch or more of snow accumulation during the next 15 days probably has more than 25% of the model solutions showing snowfall occurring, and thus has a reasonable chance of seeing some snow during the next couple weeks. Again, this is an average of 50 or so model runs, so if the plot shows 1-3” of snow, that doesn’t mean 1-3” of snow is necessarily forecast to fall, but rather the average of all 50 runs is 1-3”. So, ten solutions might be producing a 6-8” snowfall in a given location, but forty solutions no snowfall, and thus the average ends up being about 1.5”. 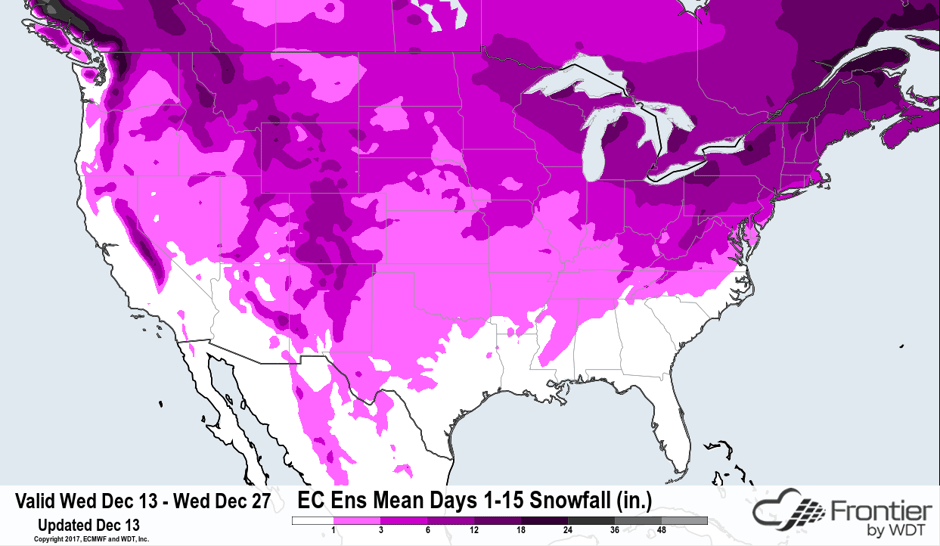 However, since a lot of the snow across the Great Lakes and Northeast will be falling this week, it may be more useful to look at the snow falling right around Christmas. The following plot from the ECMWF ensembles shows the average snowfall from all ECMWF ensemble members for the five-day period ending on Christmas Day. 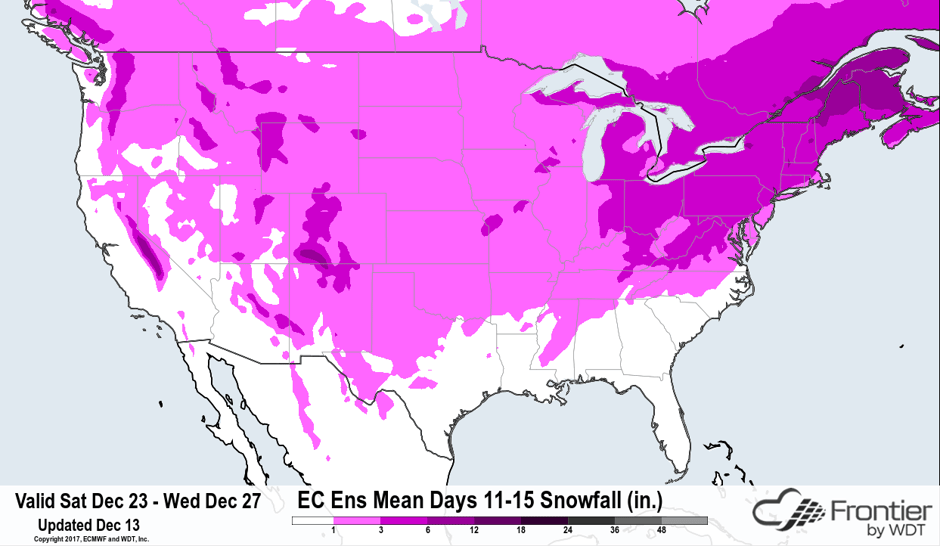 So, anywhere in or near a pink shaded region has at least a chance to see snowfall around Christmas. As usual, the far southern US has limited opportunities for snow right before Christmas, but the Midwest and Northeast, as well as much of the Rockies, could see snow on the ground Christmas morning.