Will this August Weather Pattern Continue in the Fall and Winter?

The developing pattern across North America features a strong upper level ridge along the West Coast and a central and eastern US trough. The West Coast ridge is sending temperatures to near all-time record highs across the Pacific Northwest while directing cooler air southward out of Canada into the Plains and Midwest where temperatures are falling to much below normal levels. We thought it would be worthwhile to look at past August patterns and find those that were similar to this year.

The plot below shows the current August 2017 forecast (as of August 2nd) along with a composite of the best temperature analogs. The two patterns are quite close, with the hottest weather focused across the Northwest and coolest weather across the central Plains. Taking those same analog years and projecting them forward to the September-November and December-February period yields no consistent pattern. There is a slight tendency for a warmer northern US, but that is primarily the result of the analog composite being dominated by El Niño years. 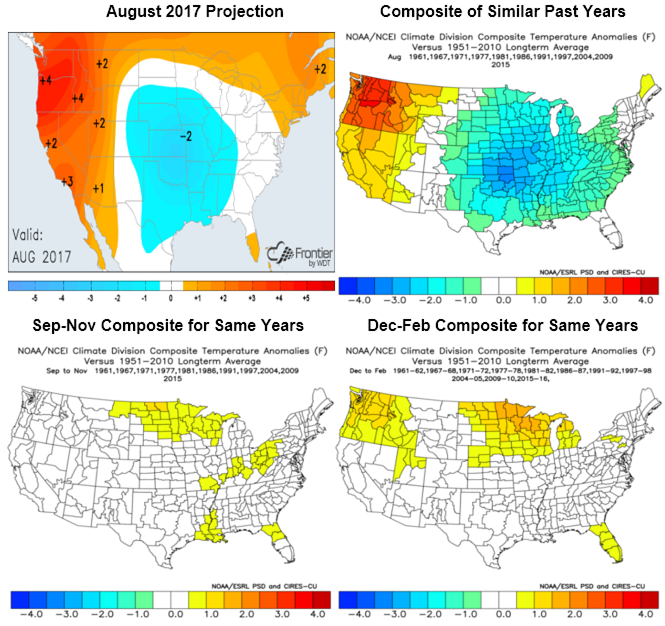 If we take the two neutral ENSO years (no El Niño or La Niña) from the above composite and then add in the next five closest neutral year composites, we come up with the following set of plots. The central US is still cool in the August composite much like this year, but the Northwest is not quite as warm. There is more of a trend for the fall and winter plots though, with the north-central US tending to average below normal in both cases, and the Southeast a little warmer than normal. Those plots are similar to the average of historical neutral ENSO years. 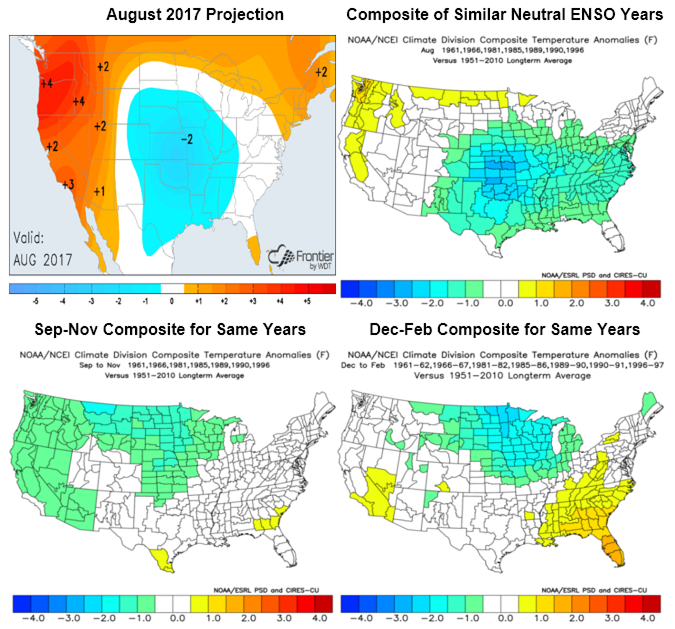 The bottom line is that while the current pattern is baking the Pacific Northwest and bringing welcome relief from the typical summer heat across the middle of the country, it doesn’t provide a strong indication for the upcoming fall and winter patterns. However, the composites also don’t favor widespread strong warm anomalies during the fall and winter like the previous two years have seen. The Pacific pattern (the current SST anomalies are shown below) is much different than at this time in 2015 or 2016, so we don’t currently expect another record warm winter.  But, it remains to be seen how patterns in the Pacific Ocean as well as atmospheric patterns will evolve during the next few months heading into the upcoming winter season.

The odds for an El Niño continue to dwindle, and a neutral ENSO winter is looking more likely. There are even increasing chances that a weak La Niña could develop by winter. The pattern in the Pacific will continue to evolve during the next few months, and will need to be monitored closely. However, the changes seen in both the Pacific and atmosphere since last year do increase confidence that this coming fall and winter won’t see a repeat of the extreme warmth of late 2016 and early 2017.

Interested in more long-range forecasts? Frontier Weather offers them and much more. Sign up for a trial today.