Will the Negative QBO Increase the Odds for a Colder Winter this Year?

The QBO, or Quasi-Biennial Oscillation, is an oscillation in the wind direction in the stratosphere within about 15 degrees of the equator. Over a roughly two-year period, winds tend to oscillate between westward and eastward, with the switch between west and east winds starting high in the stratosphere and then shifting lower in altitude with time. The QBO is the result of waves propagating vertically in the atmosphere that then interact with the mean flow to slowly change wind speeds and direction. These changes influence the overall global circulation patterns, which in turn influence winter weather patterns across North America. The following plot shows the regular cycle in the QBO. Interestingly, the QBO has been positive for the last two winters, a highly unusual event. Since last winter, the QBO has turned sharply negative though, and that negative trend should continue into the upcoming winter. 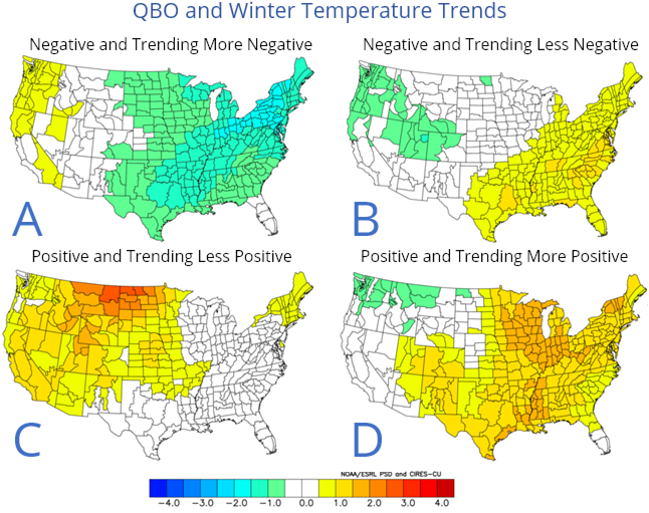 So, the QBO trends would seem to favor a much colder winter than last year, and a potentially colder than normal winter in general. While it is likely that the QBO (along with some other factors) will help to keep this winter colder than the last two winters, it is not at all sure that this winter will average below normal. The QBO is just one of many factors that influence winter temperatures, the combination of which is more important than any individual factor. But, by itself, the QBO trends do suggest that at the very least this winter should be colder than last winter. We will be looking at more potential drivers of the winter temperature pattern in the coming weeks, so stay tuned!

To learn more about what to expect this winter, sign up for my FREE Winter Weather Outlook now.