Where Does the Current Run of Warmth Rank Historically?

Where does the current run of warmth rank historically? The last six weeks have been incredibly warm across the eastern half of the US, and numerous records have been set in many locations. We took a quick look through our historical data and pulled the top 10 warmest, non-overlapping six week periods on record since 1971.

While the last six weeks have been unusually warm, averaging about 9.18°F above normal east of a Dallas to Minneapolis line, an even more anomalously warm period was seen from February 22, 2012 to April 3, 2012, when temperatures across the eastern US averaged 10.35°F above normal. However, since much of that warmth occurred during meteorological spring and not winter, the warmth seen this year does rank highest since 1971 for winter months. Additionally, record warmth the next few days will push the six week average for this year higher in the coming days, so 2017's run of warmth may yet edge out what was seen in 2012. 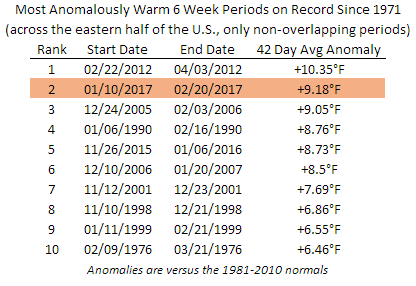 The table above shows the top 10 warmest, non-overlapping periods on record since 1971 for the eastern half or so of the country. We will take a look at these values again in a few days and see if the rankings change. You can find more data like this using Frontier Weather. Get a free trial today.