What is a Heat Island?

As urbanization increases, several impacts can arise from the increase in paved surfaces. Known as the Urban Heat Island Effect, paved surfaces can be between 50-90°F hotter than the air temperature during the day. Even after sunset, urban areas can be as much as 22°F warmer than surrounding rural areas. 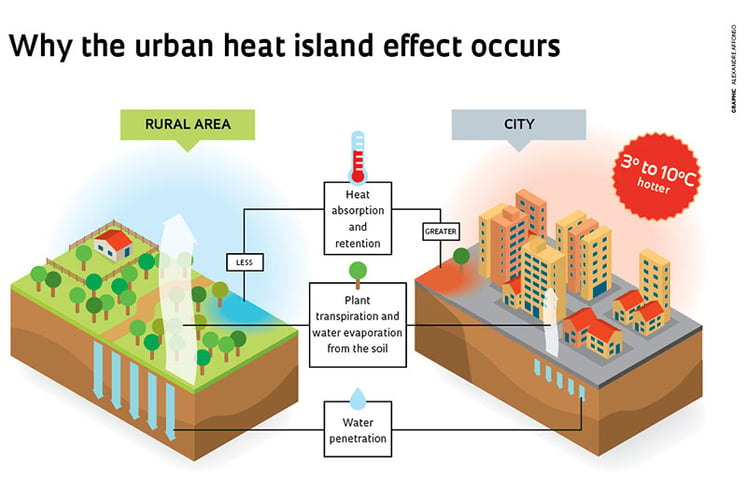 With increased temperatures comes an increase in energy demand. According to statistics, for every 1°F in temperature increase between 68-77°F, the demand in energy increases by 1.5%-2%. In extreme heat events, utility companies can institute measures to reduce the energy consumption by instituting rolling blackouts or brownouts to avoid power outages.

To produce energy, power plants rely on the burning of fossil fuels to generate electricity. As fossil fuels are burned, air pollutants and greenhouse gases are produced and released. These pollutants affect air quality in a number of ways, including the formation of ozone at the surface and acid rain. Ozone is produced as solar radiation interacts with oxygen molecules causing the oxygen atoms in the molecule to split. If one of the freed atoms joins another oxygen molecule, ozone is produced. These enhanced greenhouse emissions can also contribute to global climate change. In addition, elevated ground temperatures can increase the rate at which ozone is produced.

As the environment gets warmer during the day and less cooling occurs overnight, overall discomfort can increase. Existing health issues can be exacerbated including respiratory conditions, heat cramps, heat exhaustion, and heat stroke. Heat islands can amplify the impact of an ongoing heat wave by trapping heat near the surface. The CDC reports that deaths related to heat exceeds the number of deaths from hurricanes, lightning, tornadoes, floods, and earthquakes combined. In this satellite image of the Atlanta, Georgia area, the darker colors represent warmer temperatures. It is easy to see how the urban areas are retaining heat. 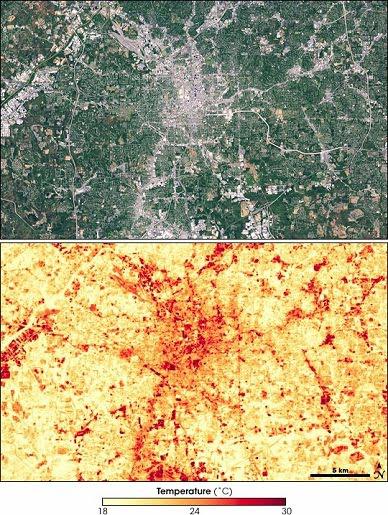 Elevated surface temperatures can also impact water quality. If rain falls on a surface with a temperature of 100°F, that water can warm to temperatures as high as 95°F. As this water runs off into the environment it can disrupt ecosystems and potentially kill aquatic life.

Many dread the summer heat because of discomfort, but the potential effects of the heat, especially in urban areas, can reach far beyond this mere discomfort. The Urban Heat Island Effect can affect everyone, both health-wise and financially. While designing structures with different types of materials can help alleviate the issues related to heat islands, they do not completely eradicate them. However, building roads and sidewalks with lighter colored materials and increasing vegetation can help considerably to reduce the heat island effect.