Perhaps one of the most noticeable aspects of the weather is the wind. It can be a welcome breeze or a hazardous gale, and changes can occur rapidly.  So, what causes the wind?

Wind is the result of differences in air pressure. It is produced in an attempt by the atmosphere to equalize pressure over a region. The atmosphere is always trying to come to equilibrium. The strength is related to the change in pressure per unit distance. The more that the pressure changes over a fixed distance, the stronger the wind. Increases in speed are frequently observed near a cold front where large pressure differences can occur over relatively short distances. Wind always blows from areas of higher pressure to areas of lower pressure. When looking at a surface map, you can get a relative sense of the wind by looking at the lines of constant pressure, also called isobars. The closer the isobars are to one another, the stronger the wind.

The green oval in the image above shows isobars closely packed together, suggesting strong winds. In the blue oval, the isobars are further apart, indicating weaker winds. In the Northern Hemisphere, winds blow counterclockwise around an area of low pressure (denoted by a red L) and clockwise around high pressure (indicated by a blue H). The light blue barbs show surface winds. The staff points in the direction that the wind is from and the barbs indicate the wind speed with a long barb representing 10 knots and a short barb representing 5 knots. The speeds represented by the flags are additive; for example, two long barbs and a short barb would be a 25-knot wind.

Differences in land surfaces, such as land versus water, can amplify winds as well. Winds can often be enhanced near a coast due to the difference in heating rates of land and sea. During the day, the ground warms more rapidly than the water, leading to higher pressure over the water than over land. Because the pressure is higher over land, the wind blows inland toward the lower pressure; this is called a sea breeze. At night, the earth cools at a faster rate than the water. As a result, the pressure becomes higher over land and the winds blow offshore, known as a land breeze. 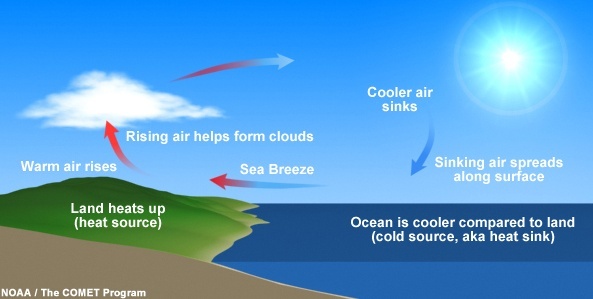 Wind can affect the generation of electricity. Wind turbines were regarded as an electricity source following the energy crisis in the 1970s. Considered a clean and efficient method to generate electricity, a turbine needs winds between 5 and 45 knots (6 and 52 mph). If winds are too light, the blades will not turn, and no electricity is generated. If they are too high, the turbine can be damaged. Today, there are wind farms located in many areas of the country where winds are relatively consistent. 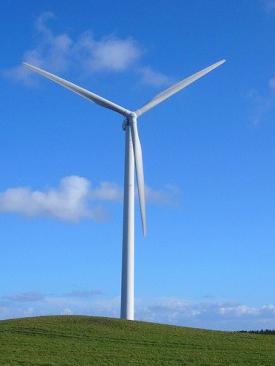 Understanding what causes wind can help you plan outdoor activities as well as understand new technologies that are dependent on wind. Knowing how geography can impact winds can also be beneficial in understanding how wind may behave, as well as identifying potential hazards.